Peter Bott was a member of a prominent family of farmers in the lower part of West Manchester Township. A small village, Bottstown, grew up around the turnpike gate on what is today U.S. Route 30 west of the city of York. Period maps are dotted with the Bott name or derivatives. Peter Bott’s sprawling farm contained a hilltop cemetery that was filled with family members and nearby neighbors and distant relatives.

His farm was along the known path of J.E.B. Stuart‘s Confederate cavalry on the night of June 30, and was the first farm north of the turnpike (Route 30). It was (and is) prominent from the pike, and would have been a landmark in the moonlight. 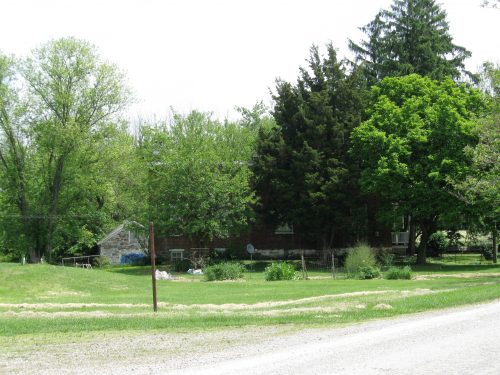 Peter Bott’s red brick farmhouse and fieldstone summer kitchen are hard to discern today with the foliage on the surrounding trees.

Bott filed a claim for 100 bushels of ears of corn that were taken from his granary by the Rebels to feed their horses. Of more importance is his claim for considerable damage to 14 acres of ripening oats (equivalent to 300 bushels) in the field and significant damages to his fences. That tidbit is of interest to the Civil War researcher, as there appears to be a story behind the story.

Bott is the only person in Jackson, North Codorus, or West Manchester townships to file a claim for damage for so much acreage and to report large bodies of Rebels camping on his land. The only claims for adjoining Dover Township are near the village itself, and represent known overnight campsites for the rest of Stuart’s division.

So, why is Mr. Bott’s obscure postbellum border claim of interest?

Satellite view of the old Bott farm (upper left), and his son’s farm to the right (red roofs). Peter Sr. owned both properties in 1863. Somewhere along here, a Confederate brigade of cavalry camped while its commander and his staff cat-napped. Courtesy of Google Earth. The road (owned by the large manufacturer that dominates the photo) is now closed between the farms.

Confederate staff officer John Esten Cooke recorded a fascinating little anecdote in his memoirs of the Gettysburg Campaign that I believe helps pinpoint who camped on Mr. Bott’s huge farm just north of the turnpike as the terrain begins its climb up to the Dover highlands.

“So the night came on, and Stuart’s great train moved…Thenceforth, dear reader, the march was a sort of dream to me. How can I relate my adventures–the numerous spectacles and events of the time? I know not even now if they were events or mere dreams, seeing that, all the long way, I was half asleep in the saddle! It was a veritable Drowsyland that we moved through on horseback! The Dutchmen, the “fraus,” the “spreading,” the sauer-kraut–the conestogas, the red barns, the guttural voices, the strange faces–were these actual things, or the mere fancies of a somnambulist? Was I an officer of real cavalry making a real march; or a fanciful being, one of a long column of phantoms?
I seem dimly to remember a pretty face, whose owner smiled on me–and a faint memory remains of a supper which she gave me. If I am not mistaken I was left alone in the town of Salem–hostile faces were around me–and I was falling asleep when [Wade] Hampton‘s cavalry came up.

I think, then, I rode on with him–having been left to direct him. That we talked about horses, and the superiority of “blood” in animals; that at dawn, Hampton said, “I am perishing for sleep!” and that we lay down, side by side, near a haystack.

All that is a sort of phantasmagoria, and others were no better than myself. Whole columns went to sleep, in the saddle, as they rode along; and General Stuart told me afterward, that he saw a man attempt to climb over a fence, half succeed only, and go to sleep on the top rail!
Some day I promise myself the pleasure of travelling in Pennsylvania. It possesses all the attractions to me of a world seen in a dream!
But after that good sleep, side by side with the great Carolinian, things looked far more real, and pushing on I again caught up with Stuart.”
Cooke, John Esten, Mohun, or, the Last Days of Lee and his Paladins. p. 46.

Nineteenth-century York County historian George Prowell wrote that part of Stuart’s cavalry ate a meal at Wolf’s Tavern, which was a short walk from Peter Bott’s farm. My best guess is that Hampton crossed the turnpike, decided it was time to rest his weary column (and himself and his staff), and used the Peter Bott farm as a campsite. It is known that he arrived quite late in Dover to rejoin Stuart, early on July 1, and served as the rear guard on the hills west of today’s Dover High School.

The Peter Bott, Jr. farm was adjacent to his father’s place. Somewhere between this building and Bott Sr.’s farm, Wade Hampton halted. Captain Cooke asked if he planned to stop for long. “Yes, for a little while–I am perishing for sleep,” replied Hampton, who dismounted and walked to a nearby haystack. Wrapping his cape around him, Hampton was soon asleep. Cooke followed suit. 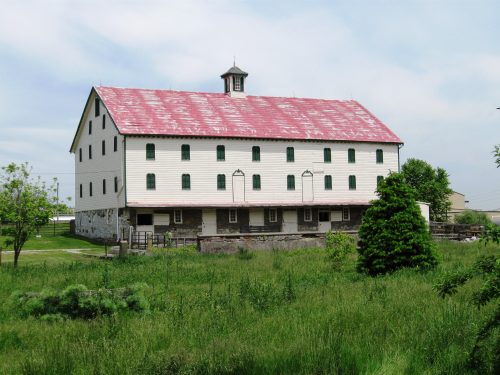 A classic example of the huge barns much admired by the Confederates in Pennsylvania. 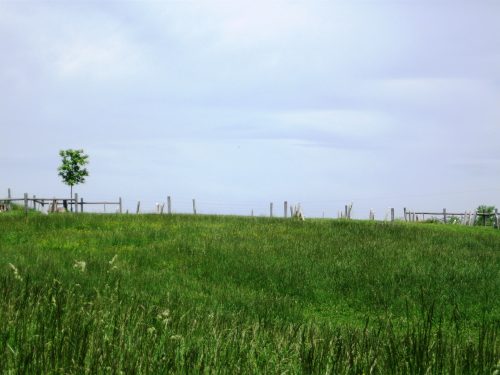 The old Bott Cemetery is on private ground and not open to the public.