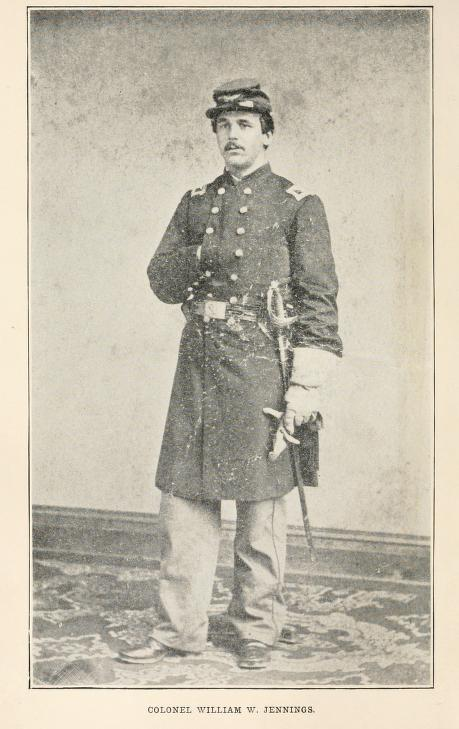 Col. William W. Jennings commanded the 26th Pennsylvania Volunteer Militia, the regiment sent to defend Gettysburg on June 23 — he and his men were delayed from reaching the town because of a cow – train accident west of New Oxford. Jennings sent a vanguard to Gettysburg, where York’s Major Granville O. Haller ordered them west of town to defend the turnpike near the Marsh Creek crossing. Jennings’ regiment arrived on the morning of June 26, marched to Marsh Creek, and by mid-afternoon was in full retreat after the approach of Confederates of Brig. Gen. John B. Gordon‘s expeditionary force. Not long afterward, Jennings’ main body was shattered by the 17th Virginia Cavalry at Witmer Farm northeast of Gettysburg and forced to march to Harrisburg. Some of his men escaped the twin fiascos and made into York County, where eventually they took part in the defense of the Columbia-Wrightsville Bridge.

Haller and Jennings, political opposites, blamed each other for the loss of Gettysburg to the Rebels.

So, who was William Wesley Jennings, who played an important role in the early part of the Union defense of Adams and York counties???

Colonel William Wesley Jennings, second son of William and Elmina E. (Boas) Jennings, was born at Harrisburg, Pennsylvania, July 22, 1838. Ile was educated in the public schools of that city. At the age of fifteen years he entered his father’s foundry and learned the trade of a moulder, becoming well skilled in the art of iron making. He followed his trade until 186o, when he purchased his father’s plant and successfully engaged in the iron business on his own account, continuing until 1877. Mr. Jennings was active in the organization of the Harrisburg board of trade and was its first president. In 1880 he was elected president of the First National Bank of Harrisburg, which position he held until his death. He was president of the Commonwealth Guarantee Trust and Safe Deposit Company (now the Common-wealth Trust Company) ; was president of the Harrisburg Steam Heat and Power Company; a director of the Cumberland Valley Railroad Company, and interested in other large corporations.

William W. Jennings distinguished himself during the civil war as a volunteer soldier and officer. When President Lincoln called for men he enlisted as a private in the “Lochiel Greys.” He was chosen first lieutenant of his company and served as such through the three months campaign of 1861, with the Twenty-sixth Pennsylvania Volunteers. Upon the return from the front Lieutenant Jennings was tendered by the governor of Pennsylvania the position of past adjutant and drill master at Camp Curtin, which appointment he accepted and filled until .July, 1862. He was anxious, however, to be actively engaged on the field, so applied for and obtained permission to raise a regiment, and the following month found him at the point in command of the One Hundred and Twenty-seventh Pennsylvania Regiment, wearing the insignia of colonel. He was in command of this regiment until the expiration of his term of service, May, 1863. Colonel Jennings then returned to private life, but during General Lee’s invasion of Pennsylvania, he was again called to the field and placed in command of the Twenty-sixth Emergency Regiment.

Politically Colonel Jennings was a Republican. He held numerous offices, among which was that of sheriff of Dauphin county, serving from 1864 to 1856 and from 1876 to 1879. In the capacity of sheriff, on the never-to-be-forgotten night of July 23, 1877, when an armed mob had taken possession of the city of Harrisburg, Colonel Jennings called to his aid men who had confidence in his ability and judgment and inspired them to suppress the deadly riot, and soon peace and order was restored in the city. He was an active and honored member of Robert Burns Lodge, No. 464, Free and Accepted Masons, at Harrisburg, and also of Pilgrim Commandery, Knights Templar. He was one of the organizers of Post No. 58, Grand Army of the Republic, held all the offices in the gift of the organization, and was an enthusiastic supporter of all its purposes. Colonel Jennings stood without a superior as a citizen; as a soldier and officer he performed his duty as he saw the-right; as a Christian and firm believer in his faith he was loyally faithful. He was an excellent financier, and not a few of the business men of today in Harrisburg owe their success and prosperity to timely assistance and advice from him when they most needed it. The needy poor ever found in him a friend.

Colonel Jennings married, December 17, 1861, Emma J. Van Horn, daughter of William and Jane (Hutton) Van Horn, the former of whom was born December 8, 1809, died October 2, 1859, and the latter was born in 1814, at Carlisle, Pennsylvania, died in April, 1849, aged thirty-five years. Mr. and Mrs. Van Horn were united in marriage in 1839. The children of Colonel and Igrs. Jennings are: Frederick B., who died at the age of seven years. Mary. William, of whom more will be said. Fanny. married Dr. George G. Ross, of Philadelphia. Harry, married Mary Saylor, of Allentown, Pennsylvania.

One possessing the sterling traits of character of Colonel Jennings could not fail to draw merited admiration front a large circle of inen of a high type. He had not yet reached his majority when he wore the uniform of a colonel and was the commander of a gallant regiment of men. He was a man among men and hence was by all beloved, both as leader and comrade. His was a genial nature, generous and broad-minded. He had no petty traits of character to mar his manhood, but was frank and open-hearted arid free from guile. He died February 28, 1894.
William Jennings, son of Colonel William W. and Emily Jane (Van Horn) Jennings, was born in the city of Harrisburg, Pennsylvania, August 18, 1868. His education was obtained in the public schools of his native city and Lehigh University. After completing his education he was engaged as a moulder and machinist for one year, and in 1889 was appointed secretary and treasurer of the Harrisburg Steam Heat and Power Company, of which corporation he became the president in May, 1894, and which he is guiding to success. He is also the treasurer of the Jackson Manufacturing Company, as well as of several electric railway lines in both Pennsylvania and Maryland. In politics Mr. Jennings is a Republican; he served as councilman in the city of Harrisburg from 1900 to 1904, and at the present time (1907) is president of the board of public works. He is a member of Robert Burns Lodge, No. 464, Free and Accepted Masons, at Harrisburg.