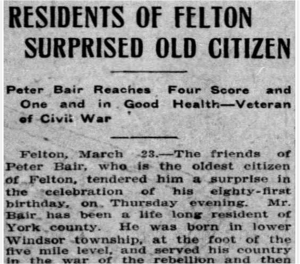 By the turn of the 20th century, 35 years after the Civil War, many of the veterans liked to gather at reunions and reminisce about their long-ago days as soldiers and remember those who had fallen. In turn, residents of many towns honored those veterans by erecting statues in town squares, parks, or cemeteries, and by holding parades and other remembrances.

In one small town in southeastern York County came together in March 1908 to honor a particular former soldier. Peter Bair was not only a Civil War veteran; he was also the oldest person living in Felton at the age of 81.

His friends and his pastor made sure he knew how much they appreciated him and his contributions to his country and his community.

“Felton, March 23 — The friends of Peter Bair, who is the oldest citizen of Felton, tendered him a surprise in the celebration of his eighty-first birthday, on Thursday evening. Mr. Bair has been a life long resident of York County. He was born in lower Windsor township, at the foot of the five mile level, and served his country in the war of the rebellion and then followed boating for a number of years. Mr. Bair is remarkably well preserved for a man of his age. Upon entering his home he was happily greeted and presented with a souvenir card by each of the party. Then all joined heartily in singing “Blessed be the tie that binds.”

“The Rev. G. L. Maice, of the Evangelical church, of which Mr. Bair has been a member for over fifty years, made a brief address, congratulating him for having passed the four score milestone of life. Then prayer was offered, commending him and his aged companion to the tender mercies of God. B. S. Sentz, William Grove, J. T. Hanigan, and James Sechrist made short impromptu speeches, to all of which Father B air responded.

“The women of the party had made ample preparations in serving refreshments.”

The article concluded with a long list of the well wishes present for the surprise party.

A Civil War veteran, he was drafted in York County November 9, 1862, mustered into federal service in York November 11 as a private with Co. E, 166th Pennsylvania Infantry (aka “Drafted Militia”), and honorably discharged with his company July 28, 1863, in York.”

He died in Felton, York County, of “chronic valvular heart disease and dropsy.” 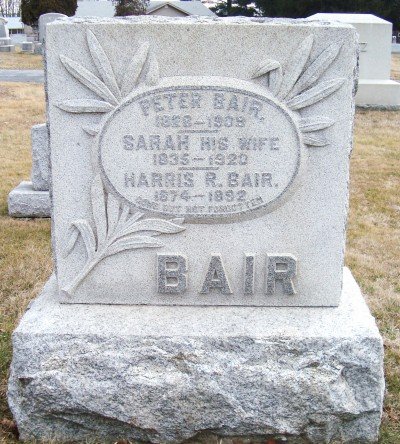