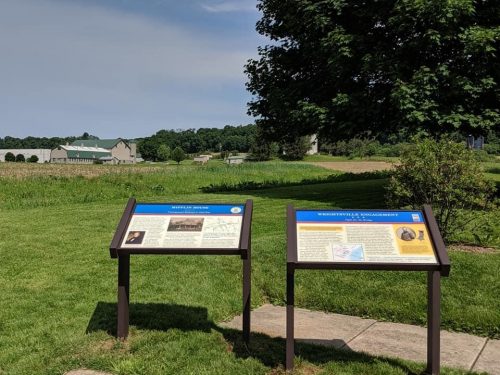 As many of my readers know, many Civil War experts consider my book Flames Beyond Gettysburg: The Confederate Expedition to the Susquehanna River, June 1863 to be the definitive military account of Jubal Early’s Confederate division while in Pennsylvania in the week before the battle of Gettysburg. That book has remained in continuous print since 2009 and remains by far my best-selling book of the 22 that I have written to date. This year, I will be speaking on Early’s expedition to numerous Civil War Round Tables across the country, including in Cobb County, Georgia, and other venues. I continue to spread the story nationally of the occupation of York (the largest town in the entire North to fall to the Confederate army),  the skirmish and sacking of Hanover Junction, and the ill-fated defense of the world’s longest covered bridge between York and Lancaster counties.

Living historians Ryan Topper and Don Bair and several others teamed up with Civil War Trails, Inc. to sponsor, fund, and install two new CWT wayside markers on Cherry Street in Wrightsville. These signs commemorate the defense of the river crossing and the role that the Mifflin/Huber House played in the June 28, 1863, engagement. They also outline the house’s earlier history as a key stop on the Underground Railroad for scores, perhaps hundreds, of freedom seekers approaching the Susquehanna River.

I was fortunate enough to have written the text for these two markers. I am currently working with other organizations on possible additional markers throughout York County for future installation.

Here is a press release from Civil War Trails concerning the twin markers in the borough of Wrightsville.

Two new signs have been installed in Wrightsville

Civil War Trails, Inc. has teamed up with the Borough of Wrightsville and the Liberty Rifles to bring the popular program to Wrightsville. The Liberty Rifles, a non-profit living history organization raised the initial capital while the Borough has secured the site and will sustain the program through maintenance and marketing efforts. The new signs are located at the end of 600 block of Cherry St. facing the historic battlefield and a stop on the Underground Railroad.

The Civil War Trails program connects visitors to more than 1,650 sites across six states. The program’s signature signs bring the modern landscape to life as visitors stand in the footsteps of soldiers, citizens, and those fighting to gain their freedom. Each Civil War Trails site is marketed internationally by state tourism offices, destination marketing organizations, and municipal partners.

The program continues to experience record visitation providing a strong return on investment and revenue for local jurisdictions. “Historic preservation is good for business.” explained Drew Gruber, Executive Director of Civil War Trails. “Our program is experiencing its largest, youngest and most diverse audience to date. Authentic places, green spaces, and personal stories motivate them to travel.”

These are the first two signs in York County to be added to the multi-state program. “We are thrilled to have another avenue for visitors and history enthusiasts to explore Wrightsville and York County through the Civil War Trails,” said York County Convention & Visitors Bureau Laura Gurreri. “Our area has a rich tradition of playing a pivotal role in the events that shaped our county. The burning of the Wrightsville bridge is an especially fascinating piece of history made here, one that we are excited to share with travelers along the Gettysburg Trail.” Hanover is developing new signage as well and they expect to be reviewed by the Civil War Trails team later this year.

More information can be had by calling the York County Convention and Visitors Center at 717-852-6006 or Civil War Trails, Inc. at 757-378-5462. Connect with us on social media @civilwartrails #openairmuseum @exploreyorkpa #exploreyorkpa

Blogger’s note: And, read the book to learn much more about the Civil War history of Wrightsville!