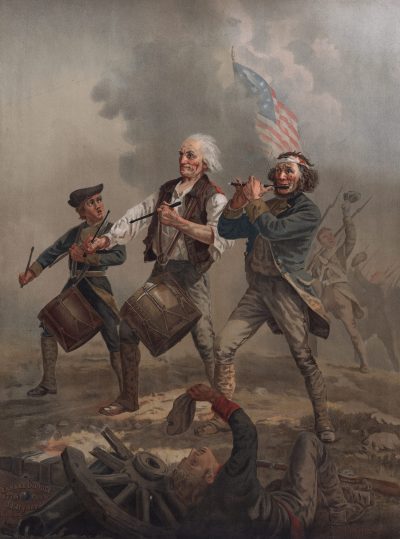 Civil War soldiers were models for the “Spirit of ’76”

I lived for many years in Perry, Ohio, a rural community about an hour east of Cleveland in the heart of Ohio’s “snow belt.” Perry was notable for several things, including vast acres of prime nursery land and a towering nuclear plant whose owner enticed the citizens to allow its construction by building one of the finest high school facilities in the Buckeye State.

Perry was also the home of Hugh W. Mosher, who served as the model fifer for Archibald M. Willard’s classic painting, the “Spirit of ’76.”

Here is an excerpt from Harriet Taylor Upton’s piece in her book History of the Western Reserve.

“Hugh Mosher served a year in the Civil War, belonging to the One Hundred and Forty-third Ohio Volunteer Infantry, from which he was honorably discharged on account of ill health. Hugh Mosher was born at Perry, Lake County, Ohio, January 29, 1819, and died at Brighton, Ohio, August 15, 1892; his death being noted in the papers throughout the country.

He was the most celebrated and probably the best fifer in northern Ohio, and at his funeral his coffin was wreathed in the American flag, upon which lay his fife, while above was hung the picture in which he appeared as fifer. This picture, the masterpiece of the famous artist, A. M. Willard, of Cleveland, entitled “The Spirit of ’76,” has three figures in the foreground, the drummer in the center being an almost perfect portrait of his father, Rev. Mr. Willard, a Baptist minister; the boy drummer on his right was found in the person of Harry Devereaux, son of General J. H. Devereaux, an officer in the Civil War, while the fifer on the left was, as previously mentioned, Hugh Mosher, whose picturesque figure stands for an exalted type of patriotism.”