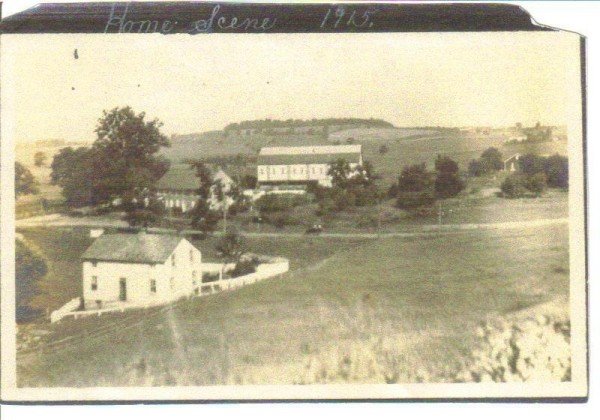 Every day, thousands of cars and trucks rumble through the new traffic circle in Spring Grove, passing by the old stone house pictured above. Few, if any, are aware of the historic significance of the building, which has been the local library, a private residence, and now is the headquarters of a flooring company. However, years ago, it served as the temporary headquarters for a Confederate cavalry unit from Virginia and Maryland during the 1863 Gettysburg Campaign. The area was the campsite of these Rebels on the Saturday night before the Battle of Gettysburg.

The 35th Battalion, Virginia Cavalry was a unit comprised of four companies from Virginia’s Loudoun Valley (the Leesburg area) and one from across the Potomac River in Maryland. They were commanded by Lt. Col. Elijah V. White, who later owned the ferry service that still exists at White’s Ferry on land he once owned.

One June 27, 1863, White’s raiders, later to gain fame as White’s Comanches for their Indian-like war-whoops and fierce combat skills, entered York County near McSherrystown and rode into Hanover. There, they refreshed themselves with York County whiskey, refitted and fed their horses, took items they wanted from local stores, and chased down a fleeing jeweler’s wagonload of watches and jewelry. Then, they rode into Hanover Junction, chased off the defending 20th Pennsylvania Volunteer Militia, and ransacked the depot. After burning local bridges and railcars, they headed to Jefferson and then to Spring Grove (then known as Spring Forge).

White’s “cavaliers” spent Saturday night on John Wiest’s farm near Spring Forge, two miles southeast of Brig. Gen. John Gordon’s camp at Farmers. Quartermaster Captain John J. White purchased a large supply of oats from Wiest to feed the hungry horses. The cavalrymen swapped tales of how they had again frightened off Yankee militia and would surely do so again tomorrow in York. So far, the expedition had been a rousing success. Captain Frank Myers stated that “no people were ever in finer spirits than those who had followed the stars and bars to Pennsylvania.” Other cavalrymen trickled in throughout the night, bringing supplies, additional horses, and livestock.

The land where White’s men camped and grazed their horses that night was still a farm through the 1960s, but modern progress has since destroyed all traces of the Wiest farm except the old house (which was once a tavern visited by George Washington during a visit to York). A Kennies grocery store, bank, gas station, and strip shopping center have long since replaced the barn, outbuildings, and fields that the Confederates would have known 145 years ago this summer. Photos of the old homestead still exist in the Spring Grove Historical Society, but few people that drive by the sturdy old farmhouse have ever seen them, I would imagine.

White’s Battalion was a formal part of the “Laurel Brigade” of Brigadier General William E. “Grumble” Jones, but it was on detached duty for much of the campaign, assigned to Jubal Early’s division. They had been directly supporting John Gordon’s Georgians since June 23 and had been the first Confederate troops to enter Gettysburg on June 26. A wayside marker on the traffic circle in downtown Gettysburg commemorates White’s entry into that town.

The next time you drive through Spring Grove on PA Route 116 (which runs through Gettysburg to Fairfield), pause to view one of the area’s few remaining Confederate cavalry HQ sites.