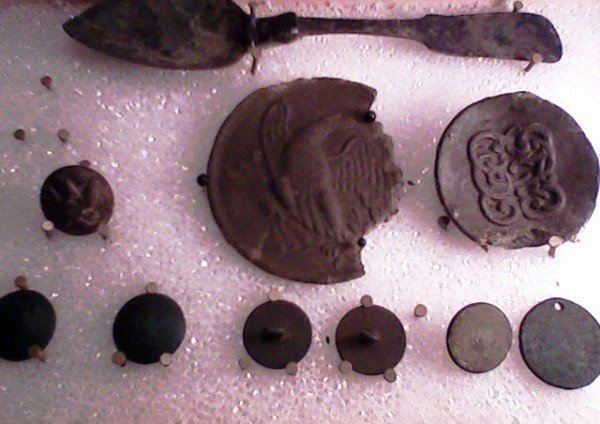 A south-central Pennsylvania Civil War buff has been finding some neat artifacts and relics with his metal detector at various sites in northwestern York County. More than 11,000 Confederate soldiers passed through York County, as well as several regiments of Pennsylvania Volunteer Militia and various elements of the Union Army of the Potomac.

Here are three union buttons, three flat buttons, a lead-backed bridle rosette, a holed half cent, a partial Union eagle breast plate, and an old metal spoon. These Civil War relics were found at two separate sites. They could have been associated with the 26th Pennsylvania Volunteer Militia, which marched through the specific areas where these items were discovered. Colonel William Jennings led his men northeasterly from Gettysburg from June 26 to 28 after retreating from the skirmish of Witmer Farm.

Of course, these relics may have come from other military units at other times in the war or even earlier, but the largest body of Union troops known to have passed through northwestern York County was Jennings’ state emergency militia regiment.

Here are some more old military buttons dug up by the same private collector. 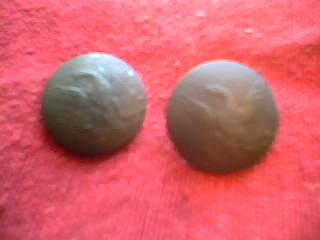 These old one-piece metal buttons were found previously. They are have nine stars around the eyelet on the concave back and are marked Scovill & L. Hayden. They may predate the Civil War. These came from yet another site in the same region. The fronts of the buttons depict an eagle holding arrows in its right claw and  a branch in the left claw.

Leavenworth, Hayden, & Scovill (as the company was first known) started business in 1802 in Waterbury, Connecticut, making pewter buttons and other metal pieces. Many soldiers in the War of 1812 wore LH&S pewter buttons.

In 1856, by then chartered as a public corporation on the New York Stock Exchange, Scovill paid out its first dividends to its investors. It is still in business today, based in Georgia with more than 700 employees and annual sales in excess of $300 million.

Anyone with detailed information on these pieces is welcomed to share the details by commenting on this post.