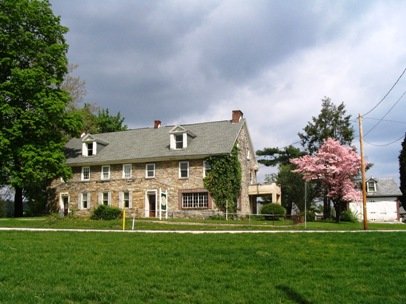 Civil War renewed calls for a public library in York

In 1974, multiple individual public libraries throughout this area allied under one banner as the York County Libraries. Since moving here from NE Ohio,  I have spent countless hours in the Spring Grove Glatfelter Library (the former location in the Civil War-era Hoke House is shown in the featured image above) and in Martin Library in downtown York PA. I spent a lot of lunch hours in the SG facility researching York County’s Civil War history.

Did you know that York borough and most other local communities did not have public libraries until well after the Civil War?

Before and during the war, a series of privately-owned lending libraries existed where patrons could borrow books from a rather limited stock. This usually involved a small fee per book or a subscription service.

The war reinforced the need for a formal public library, open to one and all, not just paid subscribers.

Here is the story of the birth of the first public library in York.

In 1794, James Smith, a signer of the Declaration of Independence, became president of the new York County Library Company, which boasted 125 volumes available in its inventory (mostly history, theology, and general literature). The library was initially housed in a room on the second floor of the county courthouse in the middle of the town’s center square (today’s intersection of George and Market streets) before being moved to a nearby office building.

In 1818, the company reorganized and issued stock to its stakeholders. It soon moved is growing collection of books to Thomas McGrath’s public house, a popular hotel and tavern on the square. Because many patrons failed to return their borrowed books, the inventory was shrinking to the point where in 1822 and again in 1829, many new volumes were purchased and added to the library. By 1840, the collection was moved to a spot in the York County Academy (now York College). Some of these remain in the holdings of today’s Schmidt Library on campus.

During the Civil War, York’s newspapers advertised bookseller Hiram Young’s subscription-based “circulating library.” Founded in 1861, this library contained “640 volumes of good Books.” By purchasing a subscription, patrons could check out any of these books. During its first year in operations, the library had 1,800 separate transactions. In January 1862, Young advertised that he was soliciting subscription renewals, as well as new ones, in order to finance a planned expansion to 1,000 books in the spring.

“The library is of incalculable benefit to the young people of York,” Young touted, “and it is hoped its value will not be overlooked by those interested in the prosperity of the community.”

His problem was cash flow. Many in the town did not have the extra resources to support a subscription-based library. Many local wage earners were off in the army or navy. Some had come home from the war with terrible injuries that prevented them from working. Taxes had increased since 1861, straining the average family’s disposable cash. Luxuries such as renting books to read were set aside.

The cries for a free public library increased as the war progressed.

“The want of a well selected public library has long been felt in this community. At the instance of a number of our enterprising citizens who are desirous of establishing a library, the ‘Irving Literary Association’ discussed the following questions: – ‘Would a public circulating library improve the moral and intellectual condition of this community?’ and, in accordance with their request, a synopsis of the arguments on the subject is herewith submitted.

“The affirmative offered the following: –

“1st. That as Books are the main source from which we, in common with all the rest of mankind, derive all, or nearly all, the knowledge we possess, the advantages intellectually, politically, morally and religiously of a well selected public library are not only incalculable but self-evident.

“2d. That as the national greatness and prosperity are justly attributed to the nation’s intelligence, so the wealth and happiness of a community are in proportion to its intellectual and moral culture.

“3d. That in the library we find the good advice of the wise–the counsel of the good–and the accumulated knowledge of the past.

‘4th. That a public library would have a salutary influence on the youth of this community, offering them intellectual and moral pleasure instead of the gratification of the propensities of the resorts of questionable pleasure, only too numerous in our otherwise-favored town. The arguments advanced by the negatives were mainly addressed against the abuse of public libraries; and the placing in them of books of bad or doubtful character.”

Despite the pleas, Yorkers turned a deaf ear to the need for a free public library. Hiram Young’s subscription service remained the best option for those residents fortunate enough to have disposable cash.

In 1874, the calls renewed for another option. The individual lodges of the popular Odd Fellows fraternal organization backed the formation of the new United Library Association, a subscription-based public library. However, that effort failed in 1893 and the books went into storage in the Odd Fellows Hall on S. George Street. The books (3,195 in number) were subsequently donated to the new high school.

Over time, other groups established their own libraries. They included the Historical Society, York County Academy, the Bar Association, Presbyterian Church, and St. John’s Episcopal Church.

In 1916, the Martin Library Association, the forerunner to today’s Martin Library, was incorporated. Milton Martin provided the initial funding, which was reinvested to grow the pool to acquire books. In 1920, the association procured the land at the corner of Market and Queen streets.

Martin Library opened to the public in October 1935, more than seven decades after progressive-minded residents called for a public library during the Civil War.