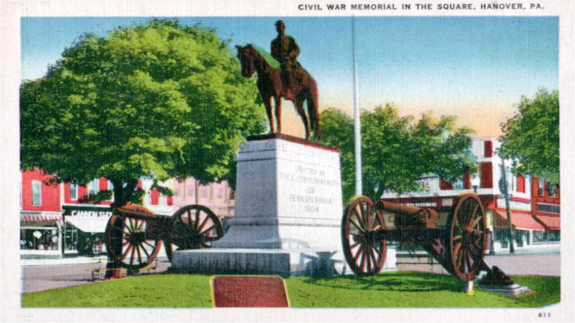 One of my hobbies is collecting old postcards from the early 20th century with Civil War topics such as monuments, battlefields, generals and personalities, buildings, etc. My focal point is the Battle of Gettysburg, as well as ACW-related topics from York County, Pa. and from other areas of the Keystone State.

The above postcard is a linen dating from the early 2oth century and shows the Civil War monument known as “The Picket,” which back then was in the traffic circle in downtown Hanover, Pa., in southwestern York County. The statue commemorates the Union cavalrymen who fought here in the June 30, 1863, Battle of Hanover on the day before the Battle of Gettysburg.

The traffic circle is long gone, but the memorial is still on the town square, albeit now off on one corner.