Recently, I gave a customized tour of Jeb Stuart’s ride through York County, Pa., during the Gettysburg Campaign to my friend and fellow engineer Don Madar. We retraced the Confederate route from Hanover north to Dillsburg. Along the way, we briefly paused at Dubs Church, near Lake Marburg, where I retold the interesting story of the slain Union cavalry courier who was carrying an important dispatch from the new commander of the Army of the Potomac, Maj. Gen. George G. Meade. Local tradition says the victim was a New York cavalryman whose father came to Stone Church in Brodbecks to exhume his son after the war and take him home.

Don, ever inquisitive, searched through the records of New York cavalry units and found a possibility as to the dead man’s identity, a longstanding mystery here in York County.

Here we have a courier from the 6th NY Cavalry, killed while carrying a dispatch. The date and location are wrong, but the fact that a courier from a NY cavalry unit is killed during the Gettysburg Campaign does fit our guy. At the end of the backstory, I will present the “smoking gun,” an account from the regiment to seems to corroborate this possible identity.

Here’s the backstory and the 159-year-old mystery. 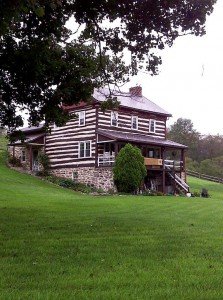 This old log home near Brodbecks in southern York County, Pa., was the site of a shooting during the 1863 Gettysburg Campaign. Owner George Bair (spelled Baer in some accounts) feared for his family’s safety when a stranger rode to the house near midnight and began hollering in English, not Bair’s native tongue (which was German). Bair mistakenly believed the man might be a Confederate raider. He shot and killed the rider, who turned out to be a courier from the Army of the Potomac bearing important dispatches for headquarters.

The tragic story received considerable media coverage in July 1863 and continues to interest historians even today. 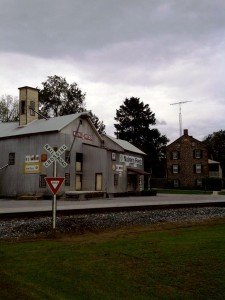 George Bair was a prominent miller in the hamlet of Green Ridge (now Brodbecks). His was a popular mill which has survived even to this day, although its appearance has been heavily modified over the years. 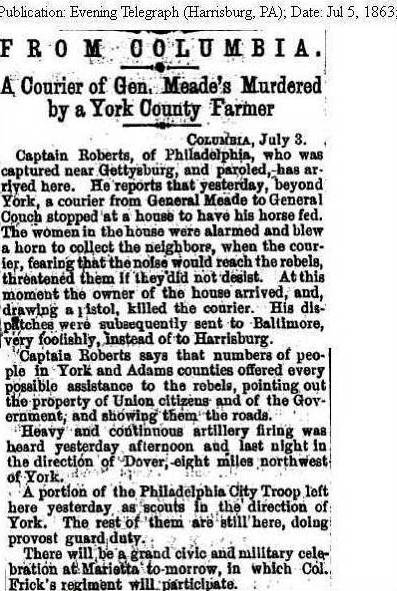 News clippings from the press coverage back in early July 1863. 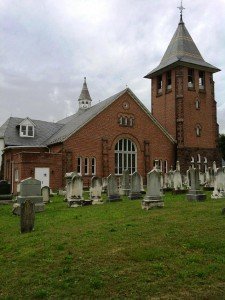 The slain New York courier was buried in the graveyard of the Stone Church. Sometime later his father came to York County, disinterred the body, and took it home for reburial.

“Green Ridge, a hamlet along the railroad one mile north of Glenville, is situated in a picturesque region. In 1825 George Bair built a grist mill and saw mill at this place. From that date until 1864 he ground the “chop” and sawed the timber of this region for himself and his neighbors of Codorus and Manheim townships. He also prospered as a farmer. In 1864 he sold his mills and farm to Ely Heindel, who carried on the business until the time of his death. T. S. Snyder, his son-in-law, succeeded in the ownership of the property and conducted the grist mill, saw mill and flour and feed business. S. B. Brodbeck owns a large creamery and warehouse and does an extensive business. S. F. Roser carries on a general merchandising business.It was at Green Ridge in June, 1863, during the Confederate invasion that an unfortunate accident occurred. General Lee’s army was moving toward Gettysburg from Chambersburg. Late in the night a despatch bearer from General Meade, commanding the cavalry of the Potomac army, had been sent from Littlestown to convey orders to General Gregg at Manchester and if possible communicate with Baltimore and Washington by telegraph at Hanover Junction. This courier had stopped at Marburg in Manheim Township and took supper with Mr. Gallatin. He left there, intending to proceed hastily to Hanover Junction. Having lost his way, he halted in front of the residence of George Bair at Green Ridge. Fear and consternation had spread all over this country because of the approach of so many troops, and the rural folk were tremulous with excitement. When the despatch bearer called out in loud tones in front of the Bair home, a misunderstanding took place between him and Mr. Bair, who thought the soldier was a Confederate raider, and while standing on the balcony, he leveled the gun and shot the soldier dead. The soldier was buried in the graveyard at the Stone Church, and a year later, his remains were taken by his father to his former home in the state of New York.”

George Bair was arrested and taken to Frederick, Maryland, where he was tried and acquitted by a military court. It was a sad case of mistaken identity, coupled with the general fear and uncertainty that gripped York County during the Confederate invasion and its immediate aftermath.

“The death of a dispatch bearer at Green Ridge, in Codorus Township, was one of the most unfortunate events of the Confederate invasion of 1863. At 11 A. M. of June 29, General Meade, with his headquarters in the saddle between Frederick and Union Bridge, wrote out an extended report of his plan of operations and the position of his different corps then moving eastward toward Gettysburg, Hanover and Manchester. This courier was entrusted with the important duty of transmitting Meade’s dispatches to General Halleck, the head of the army at Washington. He entered the lower end of York County and reached the village of Marburg, four and a half miles southwest of Hanover, at 9 P. M., where he halted for supper. As the telegraph lines had been cut in western Maryland, this dispatch bearer was carrying his message to Glen Rock, where it was supposed a line was still open to Baltimore and Washington.

“After leaving Marburg, he moved eastward and seems to have lost his way, when he approached Green Ridge. Not knowing which road to take for Glen Rock, he stopped at the farm house of George Bair, and called for the occupants to show him the way. It was now midnight and the affrighted farmer, who did not understand English, thinking the soldier in front of him was one of the enemy, he shot and instantly killed the dispatch bearer who fell from his horse. His remains were interred in the burying ground at Stone Church in Codorus Township. A few months afterward, the father arrived and had the remains removed to the home of the soldier in New York state. Mr. Bair, in great distress, surrendered himself to the military authorities and was taken to Hanover and later to Frederick, Maryland, where he was tried by a military court and acquitted of any crime. The dispatch which the soldier carried was found on his person after his death, sent to the War Department at Washington and appears in full in the “War of Rebellion,” Series 1, Volume 27, Part 1, pages 66-67.”

Columbia, Pa., July 3 – “Capt. Roberts, of Philadelphia, who was captured near Gettysburg and paroled arrived here. He reported that yesterday, beyond York, a courier from General Meade to General Couch stopped at a house to have his horse fed. The women in the house were alarmed and blew a horn to collect the neighbors, when the courier, fearing that the noise would reach the rebels, threatened them if they did not desist. At this moment, the owner of the house arrived, and drawing a pistol, killed the courier. His despatches were subsequently sent to Baltimore, very foolishly, instead of to Harrisburg.” 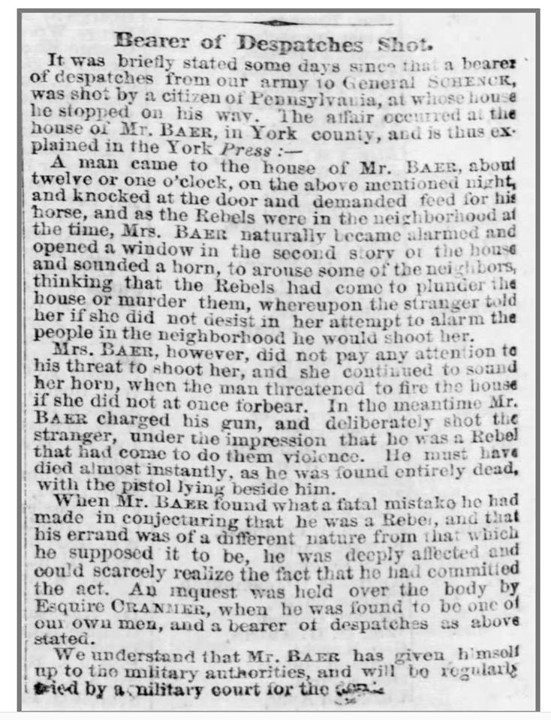 This one places the event down in Maryland! It  directly matches the account from the 6th NY Cavalry that Don Madar uncovered.

“A strange affair occurred in Montgomery county on Wednesday night. A soldier awakened a farmer near Rockville, and demanded that he should instantly get up and give him a horse, as his had given out. This the farmer refused to do, and the soldier then threatened to burn his barn and house if he did not comply. The farmer’s wife then blew a horn (supposed to be a signal to awaken the neighbors), and, thereupon, the soldier said he would shoot both the farmer and his wife, and while drawing his revolver was shot and killed by the farmer.

“By this time a number of the neighbors had congregated, and upon examining the body of the soldier found that he was a member of a New York cavalry company. They found upon his person a number of despatches and papers, which were brought to Gen. Schenck (the commander in Baltimore) yesterday. These were found to be highly important despatches from Major General Meade, Commander of the Army of the Potomac, to Gen. Halleck, Commander-in-Chief at Washington.

“It appears the soldier was the bearer of these despatches, and that, his horse giving out, he had made the demand for one of the farmer, who, not knowing who he was, shot him. The despatches were immediately transmitted to General Halleck. The name of the farmer or soldier did not transpire. Colonel Don Piatt, chief of General Schenck’s staff, has the affair under investigation.”

So, did Don nail it? Is the dead man at Green Ridge/Brodbecks really Pvt. Jacob Guilford Otto of the 6th New York Cavalry?

Or, were there two similar shootings, one in Rockville on July 1 that killed Otto and another here in York County a day earluer? Not likely but possible.

Here is a link to Otto’s gravestone from the website Find-a-Grave.

From the History of the Sixth New York Cavalry (1908). This very well could be our man! 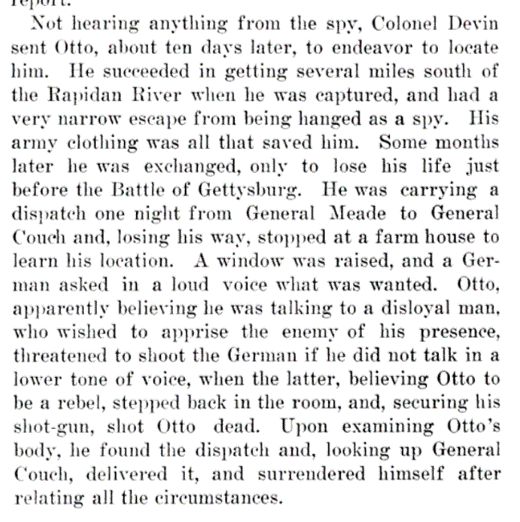