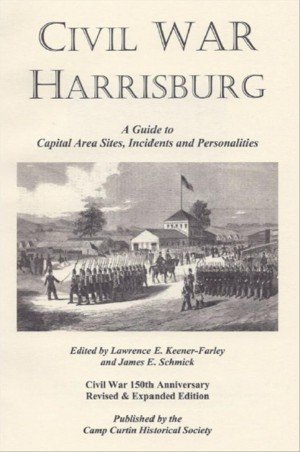 James E. Schmick, president of the Camp Curtin Historical Society, Harrisburg, will present a program about the city of Harrisburg during the period 1861-1865 at 7 p.m. on Wednesday, February 20, 2013 at the monthly meeting of the York Civil War Round Table. The meeting will be held in the auditorium of the York County Heritage Trust at 250 E. Market St. in downtown York, Pennsylvania. There is no charge for admission and the public is welcome! Parking is also free!
“Civil War Harrisburg” will recall the city’s history during the four years of the Civil War, including President Abraham Lincoln’s pre-war visit to Harrisburg; the opening of Camp Curtin in present-day uptown Harrisburg, and Lincoln’s funeral train and viewing at the State Capitol on April 21 and 22, 1865.
Several tables of Civil War artifacts will be on display, along with an assortment of 1909 Lincoln postcards, including one entitled “Emancipation.”
Schmick is the founding and current president of the Camp Curtin Historical Society and Civil War Round Table and co-author of “Civil War Harrisburg,” copies will be available for signing. He has been recognized by the Pennsylvania State Senate and House for promoting Pennsylvania’s history and historic preservation efforts.
He has also received the Gettysburg Battlefield Preservation Association’s Historic Recognition Award and the General Meade Society’s Recognition Award. He was named Cumberland County Historical Society’s Historian of the Year. He also owns the popular Civil War and More bookstore in Mechanicsburg, Pa.
Bring a friend to this informative and enjoyable evening!