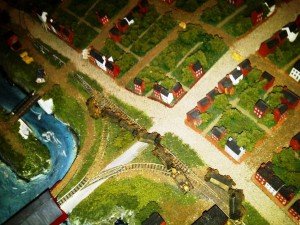 Wrightsville, Pennsylvania, is a small town in eastern York County nestled against the Susquehanna River. During the Civil War, Union forces burned the world’s longest covered bridge to prevent John Gordon’s Georgia Confederate infantry from crossing into Lancaster County. The action is commemorated in an impressive Civil War diorama on Hellam Street (the Lincoln Highway) in downtown Wrightsville.

The diorama is open from 1 until 4 p.m. on most Sundays. The view above shows how the Pennsylvania state militia blocked the bridge entrance by tipping over railcars to slow down the oncoming Rebels.

(Click on each photo to enlarge it for better viewing) 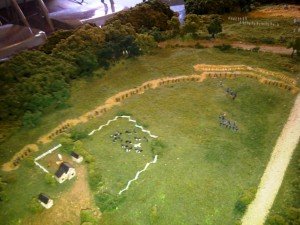 The defensive forces manning the Union entrenchments southeast of Wrightsville (south of the York Turnpike) included convalescing invalids from the York U.S. Army Hospital, squads from the 87th Pennsylvania, the Patapsco Guards from Maryland, a company of black home guards from Columbia, and part of the 27th Pennsylvania Volunteer Militia. The farm depicted in the diorama is the Detweiler homestead (the structures are all gone; the site is at the intersections of today’s Orange and Sixth streets). 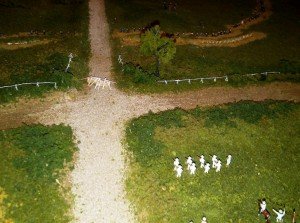 Gordon’s Georgians approached Wrightsville from the west on the York Turnpike (foreground), which is now Route 462, the Lincoln Highway. The area to the lower right on the diorama is now the Cool Creek Golf Course. 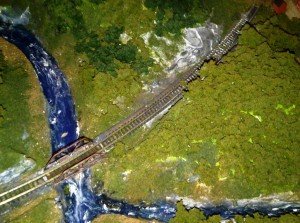 A view of the southeastern portion of Wrightsville where the railroad bends to the north as it emerges from the Kreutz Creek ravine. Rebels burned this small bridge on June 29, 1863, a day after the retreating Yankees burned the mile-and-a-quarter-long covered bridge over the Susquehanna. 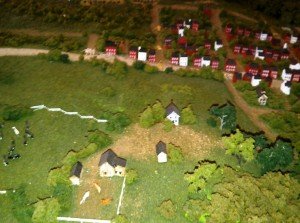 View of Wrightsville looking north from the entrenchments of the York Invalid Battalion. The Detweiler farm is in the foreground, with a tiny depiction of Col. Jacob Gellert Frick to the lower left. Frick commanded the 27th PVM during the fighting at Wrightsville. 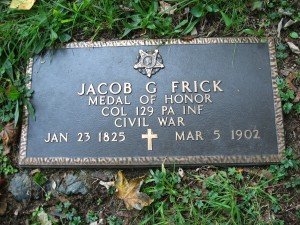 Frick is buried in Pottsville, PA in Schuylkill County. He won the Medal of Honor for his bravery at Fredericksburg while commanding the 129th Pennsylvania in the Army of the Potomac. 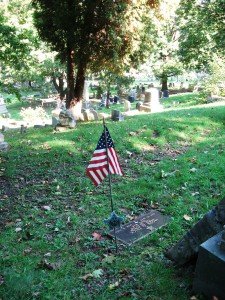 Photos of Frick’s grave are courtesy of Gerald Boehm. Photos of the Wrightsville Civil War diorama are from Scott Mingus. 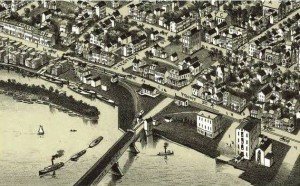 Detail from an 1894 map of Wrightsville showing the replacement covered bridge built on the same piers as the earlier one burned during the Civil War on Colonel Frick’s orders. 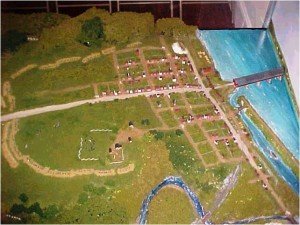 Admission to the Burning of the Bridge Diorama includes a half-hour taped audio presentation. Artifacts in the building include a hand-carved wooden beam supposedly from the burnt bridge and other relics, as well as period photographs of Wrightsville’s buildings struck by Confederate artillery shell fragments. The diorama is located at 124 Hellam Street and it is open 1 until 4 p.m. each Sunday from April through November. It is sponsored by Historic Wrightsville, Inc. The diorama is also open by special appointment (call 1-717-252-1169).