Civil War Chaplains to be the focus of York CWRT Jan. 20 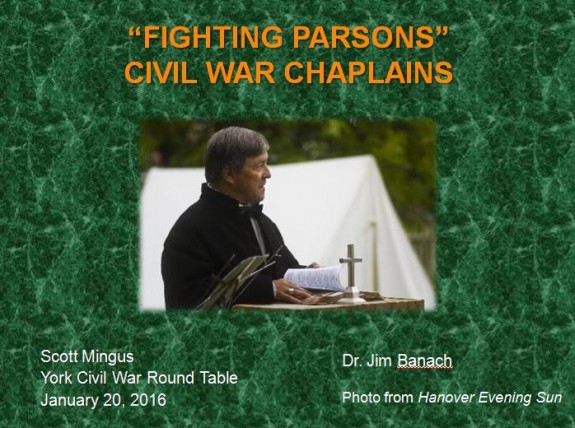 The York Civil War Round Table will kick off its 2016 campaign, which runs from January to November, with a special dual presentation titled “Fighting Parsons”: Civil War Chaplains at its monthly meeting on January 20. Multiple award-winning author Scott Mingus will present a series of PowerPoint slides on the history of chaplains in the Civil War, with a focus on those men from York County, Pa., who served their God and their soldiers. He will then turn over the bulk of the program to the Rev. James Banach, who will appear in period attire and discuss the activities of a chaplain, his routine and responsibilities, and his daily life. Jim has portrayed a chaplain at numerous Civil War events over the past few years.

This promises to be an interesting and unique opportunity to learn more about the wartime chaplaincy.

The meeting is free and open to the public. All are welcome. The York County Heritage Trust, 250 E. Market Street, York PA, is hosting the event, which will begin at 7 p.m. and should end about 8:30 pm. Parking is also free. Scott Mingus will have copies of his new book, The Second Day at Gettysburg, available for purchase and signing.

Scott Mingus is a business strategist and analyst for P.H. Glatfelter, a global paper company headquartered in York PA. He was previously a patented scientist with Avery Dennison in Painesville, Ohio, and hold a degree in Paper Science and Engineering from Miami University. He has written 16 Civil War books, and his latest work, Soldiers, Spies, & Steam: The Northern Central Railway in the Civil War, will be published later this winter. Scott and his wife Debi live in Manchester Township. 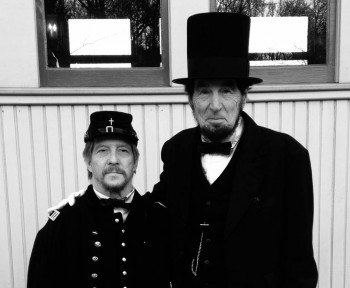 Dr. Jim Banach (above left) is a retired senior pastor who served the congregation of Redeemer Lutheran Church in Parkton, Maryland, from 1997 until his retirement in 2012. Prior to Redeemer, he pastored at Immanuel Lutheran Church in Conover, North Carolina. For several years, he has presented living history programs which include the orders of service from actual Civil War sermons. Jim holds degrees from Ferris State University, Concordia Theological Seminary, and Trinity College of the Bible and Trinity Theological Seminary. He lives in New Freedom, Pennsylvania, and often volunteers for the Steam into History Civil War excursion trains.