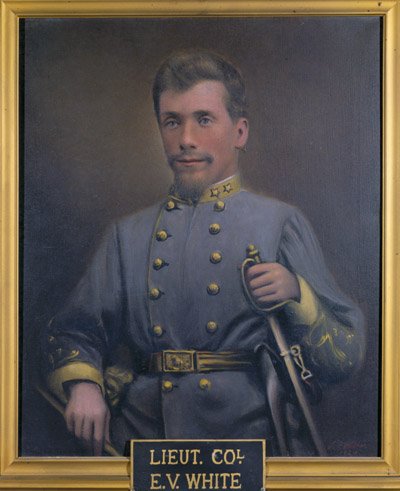 A number of libraries and schools this past week celebrated an event known as “Talk Like a Pirate Day,” a clever way for teachers to spark interest in history in a fun and interesting way. With the wild success of Disney’s Pirates of the Caribbean movie trilogy, public interest in pirates and buried treasure has been high.

The national pirates event sparked a connection for me to an article I originally posted last spring on my Charge! Civil War wargaming & news blog. It concerns one of the few tales of buried treasure in York County, not by pirates, but rather by Confederates (I’m sure the victim thought he was dealing with pirates and cutthroats!).

On June 27, 1863, Rebel raiders under Lt. Col. Elijah White visited Hanover, where they procured horses, food, liquor, supplies, and any thing else of interest, usually paying in worthless Confederate scrip. A number of merchants and shopkeepers had wisely taken their most valuable merchandise into hiding. However, some procrastinators were still in town when White’s Virginians and Marylanders rode into the center square. Hanover jeweler William Boadenhamer, after a late start, was frantically leaving town on the York Road.. Gun-toting cavalrymen overtook his carriage about a mile from the town and stole a large box of retail goods.

Resting in the shade of a tree near Samuel Mumma‘s grist mill, the Rebels opened the chest and found to their delight that it contained nearly one hundred watches and pieces of jewelry. They distributed part of the loot among themselves and rode off towards Hanover Junction. In nearby Jefferson, a soldier passed along a stolen brooch to a little girl he encountered on the street. It is one of the few jewelry pieces known to have been recovered from the entire inventory that Boadenhamer lost to the raiders. What happened to the rest?

In a 1906 letter, an aged Elijah White informed former fellow cavalry officer John S. Mosby that, on his way to sacking the railroad depot at Hanover Junction, “Nothing occurred on the way of any consequence, except I captured a wagon load of jewelry. After supplying ourselves, we buried the balance.” Was White’s treasure real and, if so, is it still out there, rusting and corroding in the ground somewhere east of Hanover?

By the way, the entire area where the old mill is private property so please do not trespass with those metal detectors!!! What’s left is undoubtedly worthless today, but in its pristine condition in 1863 was worth a small fortune. Boadenhamer managed to rebuild his business despite the loss of his most valuable merchandise to the Rebel “pirates.”

Are you aware of any other stories of buried treasure from the Civil War?