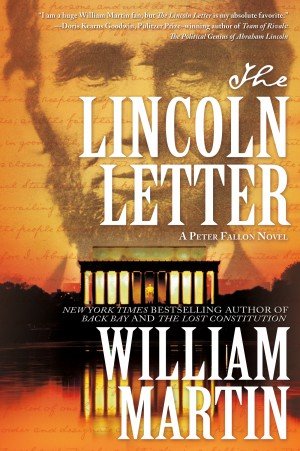 William Martin has been one of America’s more prolific novelists in recent years, with a popular following and several fiction titles on the New York Times Bestseller’s List, including Back Bay and The Lost Constitution. He also has to his credit an award-winning PBS documentary on George Washington and a cult-classic horror movie, “Humanoids from the Deep”. Now, he has written a taut, fast-paced book on the Civil War which in some ways is reflective of the “National Treasure” series of Hollywood films.

In his latest book, The Lincoln Letter, Martin’s fictional protagonists again are his popular characters Peter Fallon and Evangeline Carrington, which have appeared in several of his past ten books. They head for adventure in downtown Washington, D.C., in hopes of locating Abraham Lincoln’s lost diary from 1862. A recently discovered letter suggests that the diary is still in existence. The duo begins a quest to recover the missing diary, but of course, there are other parties also interested in the book, some with sinister ambitions.

As with some of his other novels, William Martin freely takes the reader back and forth in time from the present day setting to the historical context. In this case, we are transported from modern-day Washington, with its traffic, political intrigue, and monuments back to 1862 when Abraham Lincoln lived in what was then called the Executive Mansion and sewage ditches still lined many of the dirt streets. This juxtaposition of time and setting works well in the storyline, and helps to build historical credence for the setting.

Peter and Evangeline must battle the various other interested parties, as well as solve several mysteries along the way. Their escapades are compelling and interesting, and the book is fast-paced and action-packed, with several important plot twits and turns. It’s a worthwhile read for anyone who enjoys historical thrillers. Endorsed by leading Civil War scholars such as Doris Kearns Goodwin and Jeffry D. Wert, this book is climbing the sales charts and is a worthwhile addition to William Martin’s dossier.

448 pages, no illustrations or maps