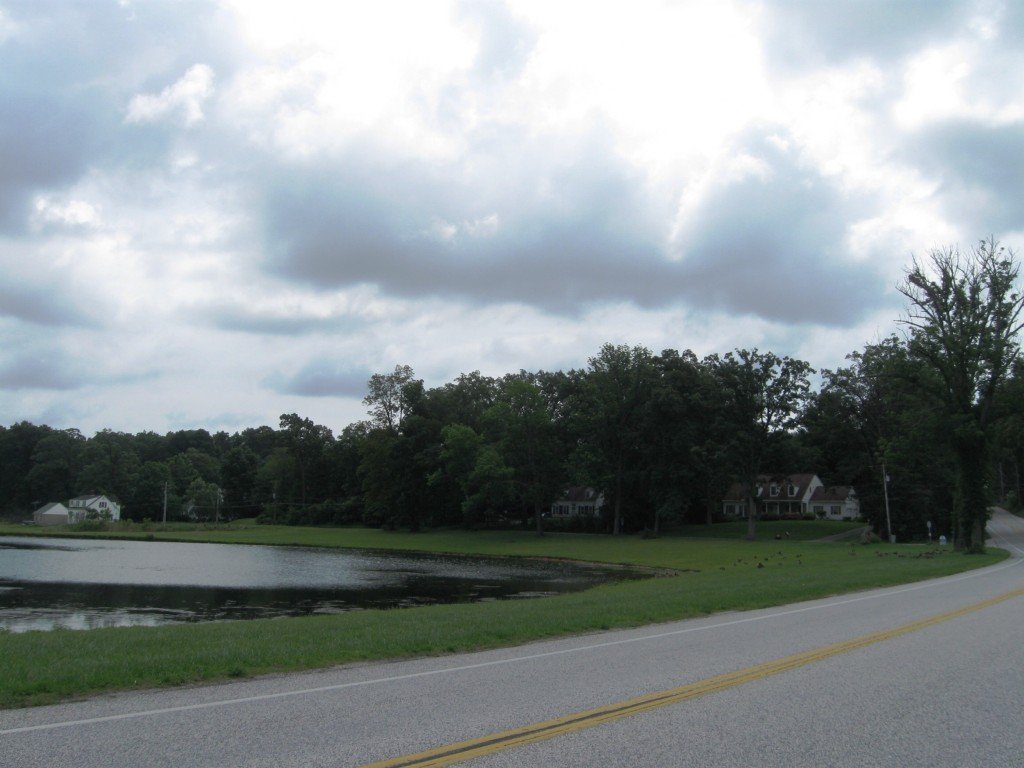 In the early and mid-19th century, this grove of trees (now a modern housing development) was Lowe’s Camp Ground, a very popular gathering place along the Susquehanna Trail just south of Shrewsbury, Pennsylvania, on the highway between Baltimore, Md., and York, Pa. The Trail is in the foreground; the road just in front of the treeline is Oakwoods.

Beginning in 1788, John Lowe (or Low in some accounts), Sr., opened his home and remodeled it to host winter camp meetings. The summer meetings were held in his barn until 1815 when Lowe and his wife both died three days apart in February. John Lowe, Jr., a leading abolitionist and conductor on the Underground Railroad, led a movement to erect a nearby church, Rock Chapel. The larger camp meetings moved to Lowe’s grove. Adam Miller Hendrix’s (and later his son Isaac’s) popular Blue Ball Inn was nearby.

From the 1820s through the 50s, the campgrounds was the site of the annual convention and camp meeting of the Methodist Episcopal Church. One observer, famed evangelist William Taylor, in August 1848 deemed it “a vast encampment, patronized largely by Baltimore Methodists.” Board tents were erected throughout the oak woods, with wooden benches for seating. Shade was plentiful, as was firewood. A nearby spring provided fresh water. Not terribly far away was Rock Chapel (the old cemetery from this once-thriving country church remains).

Three-quarters of a mile from the campgrounds on Lowe’s land was the farm of Samuel Berry, a free black man known to be active with Lowe in the Underground Railroad movement. His daughter Amanda Berry Smith became a world-famous evangelist. 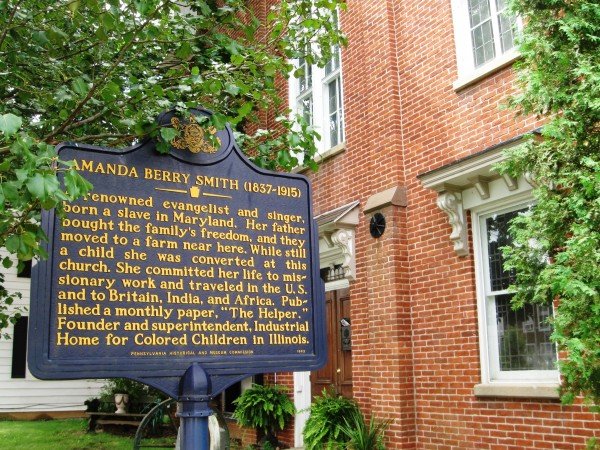 Photo taken on July 27, 2012, by Scott Mingus near Shrewsbury, Pennsylvania.

Amanda Berry Smith later wrote in her memoirs, “There was a beautiful woods a mile from New Market on the Baltimore and York Turnpike; it was called Lowe’s Camp Ground. It was about three quarters of a mile from our house. My mother was a splendid cook, so we arranged to keep a boarding house during the camp meeting time. We had melons, and pies and cakes and such like, as well.”

With the outbreak of the Civil War in April 1861, Union officials took pains to guard the Northern Central Railway from insurgents from Baltimore, which periodically raided the tracks and bridges. Hundreds of Union soldiers were deployed along the tracks in various sites between York and Baltimore. In June, a company of soldiers came to Lowe’s Camp Ground and began to convert the site into a temporary military camp. Located just a mile and a half east of the New Freedom station on the Northern Central Railway, the old campgrounds took on the name “Camp Freedom.”

Not long after the soldiers began their task a local man, perhaps the land owner and staunch abolitionist John Lowe, Jr., caused such a ruckus that reports reached Baltimore and even as far away as New York City that Rebels had ridden up from Maryland and shot up the campsite.

Here is a newspaper article from the June 26, 1861, issue of the New York Herald explaining the source of the confusion. 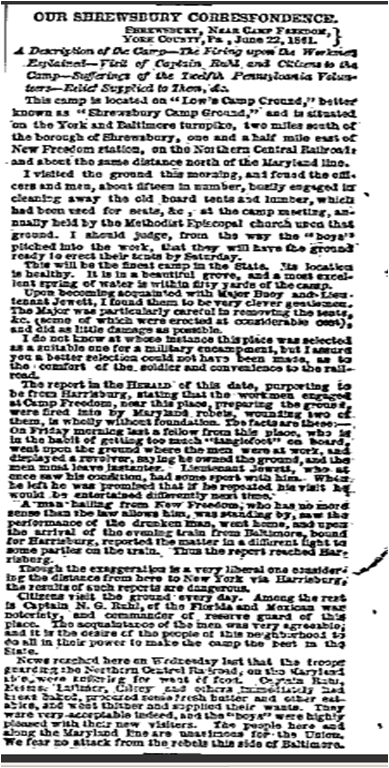 One June 22, a reporter wrote, “This camp is located on ‘Low’s Camp Ground,’ better known as ‘Shrewsbury Camp Ground,’ and is situated on the York and Baltimore Turnpike, two miles south of the borough of Shrewsbury, one and a half mile east of New Freedom station, on the Northern Central Railroad; and about the same distance north of the Maryland line.

I visited the ground this morning, and found the officers and men, about fifteen in number, busily engaged in cleaning away the old board tents and lumber, which had been used for seats, &c., at the camp meeting, annually held by the Methodist Episcopal church upon that ground. I should judge, from the way the ‘boys’ pitched into the work, that they will have the ground ready to erect their tents by Saturday.

This will be the finest camp in the State. Its location is healthy. It is in a beautiful grove, and a most excellent spring of water is within fifty yards of the camp.

Upon becoming acquainted with Major Buoy and Lieutenant Jewett, I found them to be very clever gentlemen. The Major was particularly careful in removing the tents, &c. (some of which were erected at considerable cost), and did as little damage as possible.

I do not know at whose instance this place was selected as a suitable one for a military encampment, but I assure you a better selection could not have been made, as to the comfort of the soldier and convenience to the railroad.

The report of the Herald of this date, purporting to be from Harrisburg, stating that the workmen engaged at Camp Freedom, near this place, preparing the ground were fired upon by Maryland rebels, wounding two of them, is wholly without foundation. The facts are these: On Friday morning last a fellow from this place, who is in the habit of getting too much ‘tanglefoot’ on board, went upon the ground where the men were at work, and displayed a revolver, saying he owned the ground, and the men must leave instanter. Lieutenant Jewett, who at once saw his condition, had some sport with him. When he left he promised that if he repeated his visit he would be entertained differently next time.”

The reporter continued his narrative, “A man hailing from New Freedom, who has no more sense than the law allows him, was standing by, saw the performance of the drunken man, went home, and upon the arrival of the evening train from Baltimore, bound for Harrisburg, reported the matter in a different light to some parties on the train. Thus the report reached Harrisburg.

Though the exaggeration is a very liberal one considering the distance from here to New York via Harrisburg, the results of such reports are dangerous.

Citizens visit the ground every day. Among the rest is Captain N. G. Ruhl, of the Florida and Mexican war notoriety, and commander of the reserve guard of this place. The acquaintance of the men was very agreeable; and it is the desire of the people of this neighborhood to do all in their power to make the camp the best in the State.”

“New reached here on Wednesday last,” continued the Shrewsbury correspondent, “that the troops guarding the Northern Central Railroad, on the Maryland side, were suffering for want of food. Captain Ruhl, Messrs. Latimer, Oakey, and others immediately had bread baked, procured some fresh butter and other eatables, and went thither and supplied their wants. They were very acceptable indeed, and the ‘boys’ were highly pleased with their new visitors. The people here and along the Maryland line were unanimous for the Union. We fear no attack from the rebels this side of Baltimore.”

A year later, in the fall of 1862, another Union contingent using Camp Freedom created consternation with the locals. Here is my account of this adapted from Civil War Voices from York County.

“The 13th Pennsylvania Reserves, passing through York County in the autumn of 1862, stopped in Shrewsbury awaiting orders. Woodsmen and lumberjacks from the mountains of western Pennsylvania filled the Union regiment’s ranks. The unit was widely known as the “Bucktails” because its men wore the white tails of deer in their caps. But the unit became widely known in southern York County for another reason. Colonel Thomas L. Kane and his Bucktails were accused of wanton destruction of private property after pitching camp at the Shrewsbury Camp Meeting Grounds. The Bucktails borrowed a large board tent from Shrewsbury resident Levin Willey. When Kane’s men broke camp and moved off to their next destination, several soldiers tore down Willey’s tent and destroyed it. He complained, but to no avail, and even tried legal action years after the war to recover his money, claiming that the Federal government should recompense him $65 for his loss. Like most York countians who also filed damage claims during the war, Willey never received a dime.”