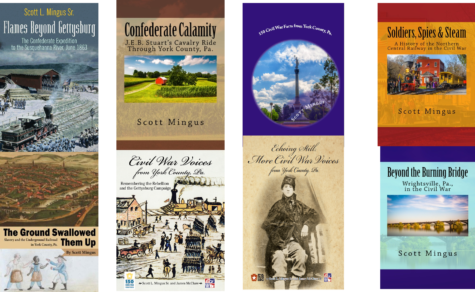 The Camp Curtin Historical Society proudly presents author and tour guide Scott L. Mingus, Sr. speaking on “The 1863 Confederate Invasion and Pennsylvania’s Response” 2:00PM, Sunday, April 11, 2010 at the National Civil War Museum in Harrisburg
One of the most strategically important parts of the 1863 Gettysburg Campaign is virtually unknown today. In late June, Confederate Brig. Gen. John B. Gordon led a vital expedition through south-central Pennsylvania with a goal of seizing the mile-long Columbia-Wrightsville Bridge over the Susquehanna River. Along the way, Gordon had to deal with hastily recruited and barely trained state emergency militia whose mission was to delay the Rebels for as long as possible and then deny them the use of the river crossings at Harrisburg and Wrightsville. This PowerPoint talk covers the first fighting at Gettysburg (a series of skirmishes on June 26), the subsequent cavalry raid on Hanover Junction, Gordon’s triumphal Sunday parade through York, and the skirmish at Wrightsville that doomed the Gordon expedition to failure.
Scott Mingus has written seven Civil War books, including Human Interest Stories of the Gettysburg Campaign (Volumes 1 and 2) and Flames Beyond Gettysburg: The Gordon Expedition. His latest book, The Louisiana Tigers in the Gettysburg Campaign, was published in October by LSU Press. His new manuscript, Gettysburg Glimpses 2: More True Stories from the Battlefield, will be published in May 2010. Mingus has also written several articles for The Gettysburg Magazine. He maintains a popular blog on the Civil War history of York County for the York Daily Record (www.yorkblog.com/cannonball), and he is a sanctioned Civil War tour guide for the York County Heritage Trust. He also has written five scenario books on wargaming. Scott and his wife Debi publish CHARGE!, the leading international magazine for Civil War miniature wargaming.
This presentation is free. Bring a friend.
Admission to the museum galleries requires the purchase of a ticket.
For information call 717-732-5115 or email genjenkins@aol.com.