Since 1978, Debi and I have been members of the Church of the Nazarene, first in Painesville, Ohio, and for the past decade and a half in York, Pennsylvania. The holiness denomination traces its roots to John Wesley and the Wesleyan Arminian tradition, the forerunner of Methodism. In October 1895, in Los Angeles, Methodist pastors Phineas Bresee and Ohio native Joseph P. Widney co-founded the Church of the Nazarene. Widney, a medical corpsman on Union boats on the Ohio and Mississippi Rivers during the Civil War, soon returned to the Methodist Church. He pastored a church along with his younger brother Samuel, who led the Sunday School and played an instrument.

The Reverend Samuel A. Widney, besides being a noted preacher and Christian educator, was also an accomplished poet and writer. In the fall of 1903, after a visit to his hometown of Piqua, Ohio, he toured the Mid-Atlantic region, with a focus on local history. In late October, he visited York County while on his way to Baltimore before heading to the South.

Here is that portion of his travelogue that appeared in the Piqua Daily Call, on October 27, 1903. In it, Widney relays a humorous story about a good Pennsylvania Dutchman who deeply prized his horse. 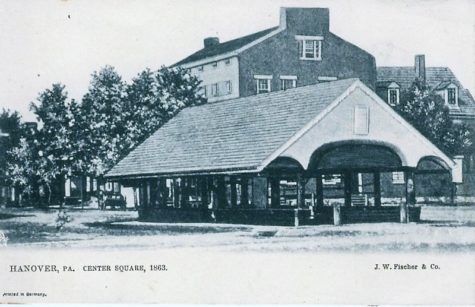 “From Hagerstown, Md., I made a side trip over into southern Pennsylvania as far as to Harrisburg, and thence by a zigzag route to Baltimore, Md. Quite a portion of my route in Pennsylvania was over the country that was raided by the Confederates during the war, hence that part of my route was of extreme interest. The two main objects of these raids were: First–to secure supplies for the troops. Second–To carry the war into the North.

“Chambersburg was not only raided by the Confederates, but the entire business portion of the city was burned by them. A hitching post still stands on the square which was the only thing left unburned at the of the conflagration. Shippensburg and Carlisle were also raided, but were not damaged to any extent.

“In the town of Wrightsville a tablet marks that spot as the point farthest east to which the raiders made their way. The raiders had expected to cross the Susquehanna river at that point, to capture the city of Columbia, but the defenders burned the bridge ere the crossing could be made, and thus saved the city from the raiders.

“At Hanover there are tablets telling the fact that a battle took place there, the result of which was that the raiders fell back to near Gettysburg, thus helping to centralize the great battle at the latter place. I could mention several other towns, and their war records, but I have given here enough to show you that Pennsylvania really had a severe taste of war.

“As stated before, one object of the raiders was to secure supplies. Near one of the smaller towns, the Confederates ‘confiscated’ a very nice horse belonging to a ‘Pennsylvania Dutchman.’ The Dutchman plead hard for the release of his horse as, said he, ‘I haf peen married to dree different womans; and I dink more of dot horse as I dinks of all dree of dose vomans togeder.’

“Considering his great love for ‘dot horse,’ the Confederates good naturedly gave it back to him; but the ‘Dutchman’ afterward ‘squared’ himself with the offended ‘female population,’ by explaining, ‘Dose vomans vas all deat [dead] at dot time, but dot horse was not deat at all.’

“It is to be presumed that he succeeded in getting a fourth wife, after his explanation; and even more than a fourth if they kept dying at the established rate.”

S. A. Widney went on to describe at length his visit to the Gettysburg battlefield and to Baltimore before he headed south to Dixie.