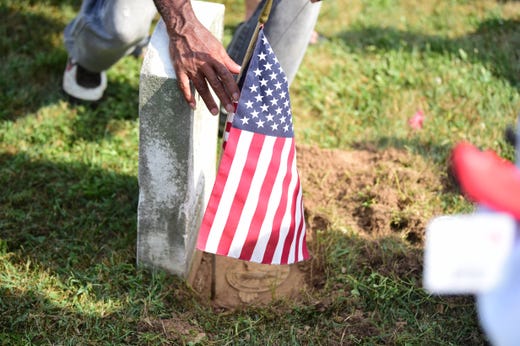 The 9th and 10th United States Cavalry regiments gained widespread fame in the Old West as “Buffalo Soldiers,” an evocative nickname reportedly bestowed upon them by Native Americans who likened their curly black hair to that of bison (there are other accounts as to the origin of the nickname but this is the one that has the most traction). The two units were among six all-black regiments authorized after the Civil War as additions to the U. S. Regular Army.

At San Juan Hill during the Spanish-American War on July 1, 1898, the dismounted 10th Cavalry charged uphill at the Spanish defenders. In the same battle, another cavalry regiment, the 1st Volunteer Cavalry, gained everlasting fame as Col. Teddy Roosevelt’s “Rough Riders.” One of the black men, Color Sergeant George Berry of Company G, a 30-year-veteran of the 10th, is credited with carrying the flags of two different regiments simultaneously up the hill. He retired not long after the fighting and returned to his St. Paul, Minnesota, home. He died there at his house on the corner of G and Canal streets on August 15, 1901. The old war hero is buried in Section 23 of Arlington National Cemetery (one of the sections reserved for African-American soldiers, including the Civil War’s U. S. Colored Troops and the Buffalo Soldiers, as well as 20th-century black servicemen).

This man, George B. Berry, was from York, Pennsylvania. Recently, reclamation and cleanup efforts at York’s Lebanon Cemetery have led to the rediscovery of the graves of at least five men who were military veterans, including Berry.

Here is the brief story of Private George B. Berry, not to be confused with the celebrated flag-bearing sergeant from Minnesota who had died well before the young York Countian joined the army.

George B. Berry mustered into the army in 1909 as a private. He served for 14 years before his death while on duty at a fort in Arizona. His is first mentioned in the March 13, 1916, issue of the York Gazette. The article states, “George Berry, colored, and a former Yorker, who enlisted in the United States army some time ago and is connected with the Ninth Cavalry, is reported to be among the troops that will be sent into Mexico, in pursuit of [Pancho] Villa, and his troop of bandits.” He formally served in the 10th Cavalry, with which he rode to Mexico.

At the time, Mexico was undergoing a bloody civil war. Pancho Villa and his armed force created havoc along the U. S. border, including killing several Americans in a savage attack on Columbus, New Mexico, and a nearby army fort. General John J. Pershing was sent to quell the violence and bring Villa to justice. In a campaign that ran from March 14, 1916, to February 7, 1917, Pershing’s troops failed to capture Villa, much to the chagrin of President Woodrow Wilson. They did kill almost 300 of Pancho’s followers.

The 10th U. S. Cavalry was based in Fort Huachuca in southeastern Arizona beginning in 1913. Other black regiments had preceded them. It was there, while on active duty in early February 1923, that Private Berry died of natural causes. His death certificate states that he suffered from “valvular heart disease, tricuspid insufficiency.” Captain John R. Oswalt, the post’s medical doctor, signed the death certificate.

George Berry left behind a widow, Carrie L. Berry. She or other family members arranged for the body to be transported home to York for burial. The Buffalo Soldier was 36 years old at the time of his death. One of his brothers, Samuel Berry, still lived in York. His other siblings had scattered across the country.

Berry was buried in York’s Lebanon Cemetery. Over time, like many other graves, his fell into some disrepair. A team of concerned citizens began working in October 2019 to clean up the cemetery, locate fallen or covered-over gravestones and markers, and bring county-wide attention to those men, women, and children who are interred there. George B. Berry, Buffalo Soldier and veteran of the Pancho Villa Expedition, a U. S. army veteran, deserves recognition and remembrance, as do the rest of the deceased.

1 comment on ““Buffalo Soldier” from York died far from home”