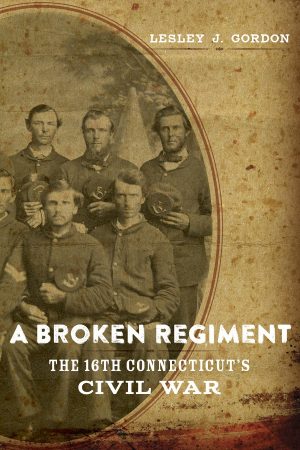 When the Civil War began, tens of thousands of eager volunteers, young and old, joined the Union and Confederate armies. Most had little concept of war and many believed it would be a glorious, grand adventure. The majority of Americans, North and South alike, thought the war would be over rather quickly, in their respective favor, of course. No one was prepared for the massive bloodshed that would claim the lives of more than 700,000 soldiers, plus countless civilians. After the war, many veterans were justifiably proud of their war record. For the men of one regiment, the 16th Connecticut, those memories were clouded by a rather inauspicious military record. Their regiment broke in its first battle at Antietam and the majority of the terrified soldiers raced for the rear, causing other regiments to also break and withdraw. Their colonel proved to be controversial and several other key leaders were below average, at best, as military tacticians and as leaders of men. Later, the remaining boys from the Nut Meg State were captured en masse and most ended up in the infamous Andersonville prison, where many of them died of disease and undernourishment. There would be no triumphant marches in front of adoring crowds after going home; no stirring speeches from grateful politicians and civic officials; no medals of honor; and very little mention in the press, other than locally.

Lesley J. Gordon, a professor of history at Akron University in northeastern Ohio, has spent years studying the service record of the 16th Connecticut and the pension records and post-war lives of the survivors, as well as the communities they represented. She has crafted a compelling narrative that is unbiased and balanced in its coverage of the beleaguered regiment, both the good and the bad aspects of their ill-fated time as soldiers in “Mr. Lincoln’s army.” This book examines the effects of their actions, including charges of cowardice and unsoldierly conduct in the face of the enemy from other regiments that were forced from the field at Antietam as a result of the 16th Connecticut’s failure to hold their ground.

Heavily based on first-person accounts (diaries, letters, memoirs, etc.), this fascinating new book follows several dozen soldiers as they report (or sugar-coat) the disaster at Antietam; the perceived incompetency of many of their officers; the mass surrender at Plymouth, North Carolina; and the subsequent succession of Southern prison camps, culminated by the horrors of Andersonville. I read this on a recent flight to and from Europe on a business trip and was hooked immediately within the first few pages. The remainder of the book did not disappoint, routinely continuing the crisp prose, interspersed frequently with pertinent snippets from the participants in the “broken regiment.” Some were forlorn, some apologetic, some eager to put the military behind them, and others striving to focus on the positive aspects of their time as soldiers, hoping to cast the regiment in as positive a light as possible for their descendants.

Gordon is to be commended for choosing a little-known regiment, one with a dubious performance record, as the subject of her study. Far too often, myself included, authors will study or write about nationally famous military organizations or ones with a strong or unusually interesting history. She chose to cast her spotlight as a talented author on an arguably poor regiment.

She does them justice.