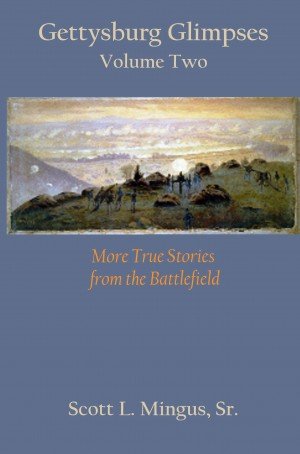 Manchester Township author and researcher Scott L. Mingus, Sr. will sign copies of his newly released Civil War book this Friday, March 1, 2013, from 7 until 8:30 at the York Emporium. This large and eclectic used book store is a must see by itself, and it is located at 343 W. Market Street, York, Pa. Parking is free and off-street. Light refreshments will be served.

Gettysburg Glimpses Volume Two: More True Stories from the Battlefield has recently been published by Ten Roads Publishing of Gettysburg, Pa. and is the ninth book written by Mingus. More than 150 fresh stories from the Gettysburg Campaign are included.

Here is just one example:

One the eve of the impending battle, the pickets had been warned to be alert and vigilant to every move of the enemy, and those troops who lay in their tents or on the bare ground had the consciousness that this upcoming day was to be one of importance. They knew that a great battle was inevitable. The next day, for so many, would bring death or injury. For now, tensions were on edge, particularly for those troops who were deployed in positions of uncertainty where the unseen enemy could be lurking nearby.

That night, Lieutenant J. Clyde Miller of the 153rd Pennsylvania was ordered to take a detail of men out on the advanced picket line. No one knew exactly where the Confederates were, so once they arrived at the designated spot, their orders were to fire on anyone appearing in their front. This was instead of the usual practice of demanding the oncoming strangers to give a particular countersign or signal that they were “friendlies.” It was a murky, misty night and Miller peered into the shadows, keeping alert for any signs of enemy activity. Spotting something that looked suspicious and not liking the looks, he mentioned to his men that he would scout ahead to see if there were any Johnnies in the vicinity.

Not wanting to get shot by his own men upon his return trip, he told them he would be whistling Yankee Doodle softly so they would know it was him. With that admonishment, Miller slowly disappeared into the fog and began investigating the situation. Finding nothing unusual after a while, he decided to return to his picket line. He was about halfway back when he was startled by a sudden outburst of gunfire from the left of his line. He heard a rush of movement coming through the cornfield near him and instantly assumed it was Rebel cavalry. Knowing that his men would open fire at the oncoming strangers to prevent a breakthrough, he ducked down and raced back to his line “far quicker than when I got out.” He had forgotten to whistle the password tune, but his men did not open fire until after he was safely among them. Bullets whistled through the night mist, but no menacing Rebel horsemen appeared.

In the morning when it was light enough, Miller inspected the battlefield, where the dead were numerous along his front. However, the laugh was on him and his men. As the fog burned away, the bodies were “seen to not be Rebel soldiers, but innocent sheep, who would not even bite a Union soldier.” They had slaughtered a farmer’s flock.