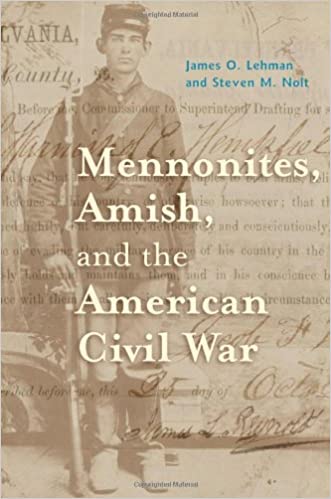 When Debi and I moved to this area in 2001, one of the more familiar aspects of the York-Lancaster region was the Amish and their communities. We lived for two decades in northeastern Ohio, where the Amish population rivals Lancaster County, albeit without the massive tourism and commercialization. The characteristic black, horse-drawn buggies of the Amish are a very common sight in much of Ohio, so we were quite prepared to see them (and drive on the same roads).

During the American Civil War, the Amish and their fellow Anabaptists such as the Mennonites were largely pacifists, preferring to stay away from secular politics and political movements, and the war created by regional differences within the country. Cannonball reader Jonathan Stayer, head of the reference section of the Pennsylvania State Archives, called my attention to a 2007 book that I was previously unaware of, Mennonites, Amish, and the American Civil War, a treatise that explores the religious minorities of this area. Jonathan wrote, “156 York Countians sought exemption from military service on grounds of conscience in 1862 (conscientious objectors), the sixth-highest number in the counties of Pennsylvania. Even tiny Adams County was home to at least 129 conscientious objectors. The reason? Both counties were (and are) home to significant communities of Mennonites and Dunkards (Brethren), and to a lesser extent, Quakers. ”

Authors James O. Lehman and Steven M. Nolt have written a fascinating book that examines the Amish and Mennonites of Pennsylvania and other states during the Civil War. Published by Johns Hopkins Press, this book is perhaps the first detailed study of the pacifistic perspective of the local Amish and Mennonite communities. The book is wonderfully written, flows well, and offers fresh information and a new perspective on the home front in the Civil War that is rarely (if ever) covered in other works.

Mennonites, Amish, and the American Civil War fills a hole in the historiography of the war, adding depth and color to the struggles of this peace-loving group who struggled with the decisions of faith versus Americanism, of individual free-will versus community pressure, and whether to take up arms and renounce their traditional values (and in some cases, risk being shunned by their families and friends to fight in the army).

Scholarly and well-researched, this book is a must-read for York and Lancaster countians wishing to gain a better understanding of the internal conflicts within the region during the war years. The activities of the Quakers and the Pennsylvania German Lutherans are perhaps better publicized and studied, which is why Lehman and Nolt’s book is of interest.

The authors begin with a sweeping overview of religion, politics, religious minorities, and their place within the changing American society of the mid-19th century. The Anabaptists, already well established in many regions including Pennsylvania, Ohio, and Virginia, were faced with the soul-searching decision of loyalty to church and family or to the government that called for volunteers to fight a war that many in the Amish and Mennonite community believed was a direct violation of Biblical teachings on seeking peace and avoiding bloodshed. Contrary to popular belief, the Mennonites were not isolationists, but rather held public offices, were involved in setting local laws and policies, and swaying public opinion.

Individual chapters focus on the Mennonites and Amish of Virginia and the controversial “war of self-defense” when the Federal government sent armies into the state. Of local interest, Lehman and Nolt spend considerable time exploring the Pennsylvania German Anabaptists of this region and their Civil War experiences, both on a macro level as well as on a very personal individual look. Early in the war, the decision to fight or to stay out of the war was simply a matter of one’s interpretation of the scriptures and teachings versus personal beliefs. When the war came to the North in the summer of 1863, the decision became much more complex, as defending the region became more of a psychological stress.

For example, 61-year-old Peter Nissley was a Mennonite minister who lived near Marietta, Pennsylvania, in rural Lancaster County. When the Confederate division of Major General Jubal Early invaded neighboring York County, with a full brigade sent eastward to threaten Columbia and Marietta, Nissley made the decision to stay at his home with his family, instead of fleeing as refugees deeper into the county. “We had some trying times,” he later recalled, as the Rebels came within six miles of his home. He could hear the sound of the Confederate artillery shelling Wrightsville on the late afternoon of Sunday, June 28 (the holy day to the Anabaptists) and later that evening could clearly see the flames coming from the burning Columbia-Lancaster Bridge.

From July 1 through the 3rd, Nissley could hear the roar of the Battle of Gettysburg. He wrote, “What awfull (sic) destruction of life and property this war has brought on us.” Like others in the Pennsylvania German community, while trying to remain neutral, he sided with the Union in his thinking, remarking that at Wrightsville “Our few men resisted them (the Rebels), retreated to, and Fired that magnificent bridge.” He, like most of his religious community, was thankful when the Rebels retired from Pennsylvania.

In the mid-1950s, an excellent movie was produced entitled Friendly Persuasion, starring Gary Cooper. It told the fictional tale of a family of Indiana Quakers who were faced with the same decision as Nissley and the German Anabaptists – peaceful nonresistance or take up arms and join the fighting. The parents agonize when a son rejects his religious upbringing and joins the Union army. Their anguish increases when the Confederates enter their state, and Cooper’s character has to make his own decision. I have watched that interesting movie several times, and it first brought attention to the religious conflict in morals that people of this area faced when their homes and livelihoods were threatened by war.

Now, Lehman and Nolt’s book brings a detailed examination of that same issue. Peppered with individual stories such as Peter Nissley’s, this work is both fascinating and informative. It includes lists of conscientious objectors in places like Holmes County, Ohio, and explores the reasons why men chose not to fight (as well as why some turned their backs on their upbringings to enter the military). Also of strong interest is the authors’ examination of the conflict brought upon Virginia’s religious minorities in the Shenandoah Valley as armies criss-crossed the area for four years.

This excellent book is available on-line through amazon.com or available from Johns Hopkins Press’s website.

Product Description
During the American Civil War, the Mennonites and Amish faced moral dilemmas that tested the very core of their faith. How could they oppose both slavery and the war to end it? How could they remain outside the conflict without entering the American mainstream to secure legal conscientious objector status? In the North, living this ethical paradox marked them as ambivalent participants to the Union cause; in the South, it marked them as clear traitors.

In the first scholarly treatment of pacifism during the Civil War, two experts in Anabaptist studies explore the important role of sectarian religion in the conflict and the effects of wartime Americanization on these religious communities. James O. Lehman and Steven M. Nolt describe the various strategies used by religious groups who struggled to come to terms with the American mainstream without sacrificing religious values — some opted for greater political engagement, others chose apolitical withdrawal, and some individuals renounced their faith and entered the fight.

Integrating the most recent Civil War scholarship with little-known primary sources and new information from Pennsylvania and Virginia to Illinois and Iowa, Lehman and Nolt provide the definitive account of the Anabaptist experience during the bloodiest war in American history.

To learn a little more about this important work, see a review at Eastern Mennonite University’s website (co-author Lehman was the librarian of that college).