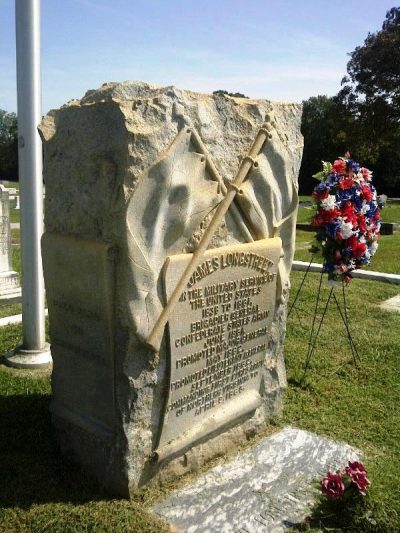 I have visited Gainesville, Georgia, on and off for 30 years during my business travel. Both companies that I worked for during my long career in the global pulp and paper industry had major facilities or sales offices in or near Gainesville. The town, located northeast of Atlanta, has grown substantially over the years but the core of downtown remains interesting and lively, with some good restaurants. Other than a bedroom community for commuters to Atlanta and a hub of regional business (including the poultry industry), Gainesville has a long and rich history, including as an antebellum resort town.

To Civil War/War Between the States students, Gainesville is perhaps best known as the last home and final resting place of Lt. Gen. James Longstreet. The commander of Lee’s First Corps of the Army of Northern Virginia for most of the war, Longstreet played a crucial role in the July 1863 battle of Gettysburg, particularly on the second and third days. Known as Lee’s “Old Warhorse,” Longstreet was a reliable commander who had Lee’s confidence and trust.

To his most severe detractors, Longstreet strongly disagreed with Lee’s general plan at Gettysburg and wanted to fight a strictly defensive battle. He then dawdled deliberately and did everything in his power to hinder the execution of the assault plan on both July 2 and 3. He reluctantly complied with Lee’s orders and intent but continued to believe that his alternative plan to slip around the Yankees and look for better ground was the best. After Lee’s death, some of his ardent admirers tried to shift the blame for the defeat from the army commander to Longstreet. Elements of this supposition have continued in Gettysburg literature through the years.

Maryland-based Department of Defense employee Cory M. Pfarr has entered the fray with his recent book, Longstreet at Gettysburg: A Critical Reassessment (McFarlane, 2019). It is a work certain to provoke thought and provide material for endless debates among Civil War researchers who enjoy discussing senior command decisions.

Pfarr early on, in his prologue “Abandoned by History,” examines the post-war politics that turned many of the ardent Democratic Confederates against the Republican-convert Longstreet. Some of “Old Pete’s” former colleagues such as Daniel H. Hill called him a “scalawag” and even worse, believing that the old general had turned his back on his roots. The author begins the first section of the book with a section titled “The Quibbling of Historians.” In it, he gives a sweeping overview of the opinions over the year of various historians and writers, both Longstreet detractors and supporters, as well as those in between. Pfarr includes 19th-century contemporaries such as William Pendleton and E. Porter Alexander (two artillery officers who were at Gettysburg), as well as modern authors.

The bulk of the remainder of the book is a treatise on the fighting at Gettysburg, with a focus, of course, on Longstreet’s actions as recorded by others and as the First Corps commander recalled in his own writings. A particular highlight of Longstreet at Gettysburg is the extensive series of excellent battle tactical maps from talented California-based mapmaker Hal Jespersen, whose fine work can be found in many recent Civil War books.

Pfarr’s prose flows well and is easy to read, spiced of course given the subject matter with periodical brief forays into the surrounding historiography of the second and third day’s actions. He cites the writings of many leading modern authors, including Jeffrey Wert, Gary Gallagher, Edward Coddington, and several others, as well as numerous former Confederate officers, to either contrast or support his central thesis that Longstreet has, perhaps unfairly, received an unfair portion of the frequent literary criticism for the many Confederate command failures at Gettysburg.

Mr. Pfarr concludes, “Impartial historians now readily admit what Longstreet understood then and had the courage to vocalize in the late nineteenth century, namely that [T. J. “Stonewall”] Jackson and Lee had unsurprisingly made mistakes like any other officer during the war.” Indeed, it was that repeated criticism of two of the South’s leading icons that drove many of Longstreet’s contemporaries (the so-called “Lost Cause” crowd) to abandon him and, over time, invoke the initial criticism of his performance at Gettysburg that has remained extant to this day. The author explores in detail the idea that Longstreet’s true performance has been masked by this early (and subsequent) biased interpretation.

Cory’s new book is certain to spark debate as to the influence of the post-war Lost Cause adherents and their overt criticism of Longstreet on modern analyses of Gettysburg, as well as the lieutenant general’s attitude and belief in his commander’s tactical plans during the fateful days of July 2 and 3, 1863. It deserves a prominent spot in the ongoing evaluation (and re-evaluation) of command decisions that influenced the outcome of major battles, including, of course, Gettysburg.

Interested Cannonball readers may obtain a copy of this interesting new book directly from the publisher, McFarland, at the company’s website, www.McFarlandBooks.com); at leading Internet retailers; or on the shelves of traditional brick-and-mortar establishments such as Civil War and More and many others, including at Gettysburg.