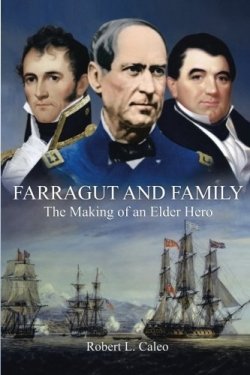 David Glasgow Farragut is a revered name in 19th-century United States Naval lore. Largely forgotten today by the general public other than Civil War buffs, in his day Farragut was one of the most well known American military figures. He is one of only 53 people to ever be pictured on U.S. paper currency and was featured on two U.S. postage stamps. A town in Tennessee is named in his honor. The Navy named two separate classes of destroyers for Farragut, who was the very first man in the U.S. Navy to hold the ranks of vice admiral, admiral, and rear admiral, and remained on active duty his entire life, a career that spanned sixty years. He was one of a select few officers who fought in both the War of 1812 and the American Civil War.

With all of his accolades, honors, and service to his country, it is not surprising that a number of authors have written biographies of Admiral Farragut over the years. Most date, however, from more than 100 years ago, with the exception of books by Russell Shorto in 1991, Bruce Adelman in 2001, and R. Conrad Stein in 2005. Now, retired New Jersey business writer Robert L. Caleo has joined the ranks with his relatively short, but eminently readable and enjoyable tome entitled Farragut and Family: The Making of an Elder Hero. 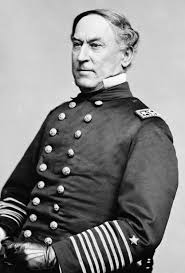 David G. Farragut, shown above in this Library of Congress photograph, was born in 1801 in rural Tennessee. His father Jordi (George) was a Spanish immigrant and his mother hailed from North Carolina. George Farragut was an officer in navy and then the Continental Army during the American Revolution. After his wife died of yellow fever, George placed his children with other families for better care. As a result, young David grew up in the home of naval officer David Porter and became the adoptive brother of future Civil War naval hero David Dixon Porter.

Farragut became a midshipman at the age of nine. He fought under David Porter during the War of 1812 and participated in the capture of a British warship. After the war, promoted to lieutenant, he fought against pirates in the West Indies and then held administrative posts.

It was during the Civil War that Farragut’s fame peaked. He played a major role in the capture of the important Southern port city of New Orleans. Ironically, the Tennessee-born Farragut trained his Union guns on two forts guarding the city; forts commanded by the York, Pennsylvania-born Confederate Brigadier General Johnson Kelly Duncan.

Farragut later ran his boats farther north past Vicksburg on the Mississippi River but failed to defeat the Confederate ironclad fleet. His men and ships suffered considerable loss in his next major action at Port Hudson. However, in August 1864, Farragut won perhaps his most celebrated victory, successfully running his ships past the guns of Confederate shore entrenchments and fortifications guarding Mobile, Alabama. He allegedly made a famous quote disregarding the presence of torpedoes which had damaged one of his ships and ordered, “Full speed ahead!” Mobile cemented his reputation among the Northern media. His later career also garnered accolades and admiration, though it paled in its impact as compared with his successes at New Orleans and Mobile.

In his new book, author Robert Caleo examines the life of David Farragut through his relationships with his famous relatives, beginning of course with his father and his lineage. Caleo in some depth discusses the Porters’ major influence on Farragut’s life, as well as other men who contributed to shaping and molding Farragut’s career.

Unlike many traditional biographies, Caleo chose not to present his subject matter in the usual chronological order. Instead, the former technical writer for Bell Laboratories took an unusual approach. “This books takes a ‘family album’ approach in its chapters and illustrations,” Caleo has explained. “I wanted to stray from the traditional chronological format.” This work, with a fiction undertone, therefore, may perhaps be better classified as a “historical reflection” instead of a true biography in the classic sense. It is an entertaining read, with fast-paced prose which does a nice job of interpreting Farragut and his inner circle of family members. It is well worth a read if you like naval stories.

Robert L. Caleo, Farragut and Family: The Making of an Elder Hero, Xlbris, 2015. The digitally printed-on-demand book has 151 pages and is annotated with end notes. ISBN 978-1-5035-1090-6. Available from Xlibris or from Internet retailers such as amazon.com.