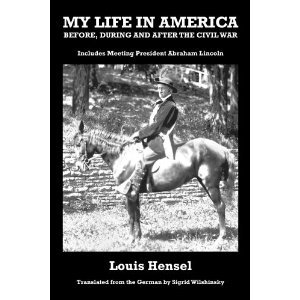 International travel in the 19th century generally was a mixed bag. The best accommodations on ships were reserved for the wealthy, the diplomats, celebrities, business travelers, while crammed below decks in steerage and other crowded berths were hordes of immigrants seeking a new life in America. Vast numbers of Europeans in particular traveled into America, landing at such ports as New York City, New Orleans, Mobile, Boston, and others. Chief among the passengers were Irish and Germans.

Louis Hensel led an unusually colorful life. Born in 1817 in German, he traveled the world and enjoyed a rich variety of experiences, including being in the United States during the tumultuous Civil War period in the early 1860s. In his later years, he wrote a series of letters to a granddaughter back in Germany recounting his adventures. These have been chronicled in a fascinating new book, My Life in America Before, During and After the Civil War by Louis Hensel, Translated by Sigrid Wilshinsky.

Hensel describes in detail his time in antebellum New York City, as well as the early war efforts there. A master horseman, he helped train some of the raw recruits for the Union cavalry. But, perhaps the most interesting parts of the book are the sections which deal with Hensel’s interactions with Abraham Lincoln and his subsequent travels throughout the Confederacy while working with a touring German opera troupe.

Hensel, ever the extrovert and showman who lived to be 91, while touring Washington Cty manages to wangle his way into a conference in the White House between Abraham Lincoln and a group of Native American leaders. He pretends to be a translator and acts as a go between with the chiefs. He smokes a peace pipe and ends up conversing with one of the Indians.

He then tours the South with the German singers and showpeople, giving a telling glimpse into the ongoing social life in several major Southern cities despite the declining fortunes of the war efforts. Entertainment and merriment were still available for those of privilege.

Hensel discusses a wide range of activities, from his many pets to his opinions on America’s war as well as other conflicts around the globe. He leads a nomadic, almost gypsy-like existence, cheating death a handful of times in his misadventures. He marries an American woman and has two children, but his lust for adventures keeps him on the road. Late in life, he begins corresponding with an adult daughter who has moved to Germany and a granddaughter who he has never met.

Details of mid-19th-century life come alive in the letters of a German immigrant, translated by Sigrid Wilshinsky and recently published as “My Life in America Before, During and After the Civil War” while researching her local library. “Reading Louis Hensel’s letters is like peeking through a rip in the curtain of history and seeing through the eyes of one who had experienced so much,” Wilshinsky says.

Hensel was born in 1817 and lived a life of travel and adventure, as colorfully described in letters to his granddaughter back in Germany. Wilshinsky translated them from Suderlein German into modern English. Hensel’s adventures include meeting Abraham Lincoln in the White House while pretending to be a translator to various Native American tribes; life in New York City in the mid 1800s; training the Union Calvary as a master horseman; working with a traveling opera company, and various intimate details of an America that was still untamed yet quickly ascending as a world powerhouse.

“My research on Hensel’s life confirmed to me at least two things: that America’s heritage is rich with noble characters, and that we have much to learn from them,” says Wilshinsky, who immigrated to the United States from West Germany in 1962 after her family escaped from communist East Germany a decade before. “He was a hard-working man who fully utilized his talents and embraced what life threw his way.”

My Life in America ~ Before, During and After the Civil War