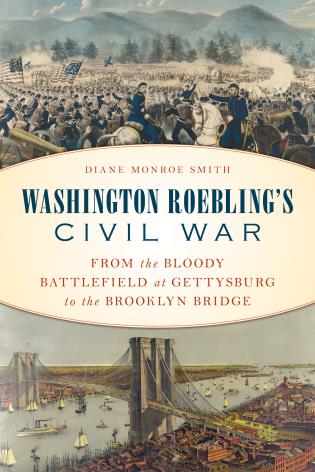 The Brooklyn Bridge is one of the best-known landmarks of New York City. Completed in 1883 after 14 years of work, the 1,600-feet-long suspension bridge crosses the East River and connects Manhattan to Brooklyn. It is still in use, making it one of the oldest roadway bridges still in use although heavy commercial trucks are no longer allowed on it. German immigrant John Roebling designed it before the Civil War and spent more than a decade promoting the idea before it was adopted. While planning the location of the bridge in 1869, he developed tetanus from a foot injury and died. His son, Washington Augustus Roebling, assumed the mantle of chief engineer and constructor. After suffering compression sickness, he managed the project in absentia and his wife Emily Warren Roebling managed the day-to-day affairs.

Emily was the sister of famed Civil War Major General Gouverneur K. Warren, who had gained everlasting fame for his role in the battle of Gettysburg. A statue of General Warren graces Little Round Top, where the New Yorker directed incoming Federal troops after spotting distant Confederate movement toward the unguarded height. Only a handful of Union signal officers were on the hill at the time, as well as General Warren and his staff, which included Emily’s future husband Washington Roebling.

Unlike Warren, there is no statue of Roebling on Little Round Top to inspire photographers and battlefield visitors. His role in the battle is largely unknown except to hardcore Gettysburg buffs.

Now, author Diane Monroe Smith has written a new book that details the youthful Roebling’s wartime experiences. Published by Stackpole Books, the biography is titled Washington Roebling’s Civil War From the Bloody Battlefield of Gettysburg to the Brooklyn Bridge.

“Washington,” John Roebling addressed his eldest son, “You have kicked your legs under my table long enough, now you clear out this minute.” With that early May 1861 admonition, 24-year-old Washington Roebling departed his father’s house and joined the Union army at the start of the Civil War. After a stint as a private in the New Jersey State Militia, he resigned and joined the 9th New York Infantry where he initially helped design and construct suspension bridges. Roebling was with the Army of the Potomac in some of its greatest battles, including Antietam, Fredericksburg, and Chancellorsville. At Gettysburg, he served as General Warren’s aide-de-camp.

As Warren and other staff officers scoured the countryside for troops to redirect to Little Round Top to counter the perceived Confederate threat, Roebling assisted Lt. Charles E. Hazlett’s Regular Army artillerymen in hauling several heavy cannons to the crest. Hazlett soon died from a Rebel bullet, as did a nearby Union general, Stephen Weed. Roebling by then had left Little Round Top to seek more infantry support.

In 1864, Roebling met Emily Warren who was visiting her brother’s Fifth Corps headquarters. Their relationship developed into a lifelong partnership and marriage that culminated in the successful construction of the Brooklyn Bridge.

Author Diane Smith skillfully tells the story of Roebling’s relationship with his father and with General Warren, as well as Washington’s wartime service in this compelling pageturner. Profusely illustrated, the book is a welcome addition to the historiography of the Army of the Potomac and its leading personalities. Washington Roebling’s fame as a post-war bridge builder is what we most remember about this remarkable man but his wartime experiences and relationships are what influenced and molded him. Smith neatly keeps Roebling’s personal story firmly grounded within the context of the larger battles and strategic initiatives of the Civil War.

It is a job well done by this Maine-based prolific author and Fifth Corps expert.