Many Americans are aware of the role Mrs. Mary Surratt reportedly played in the Lincoln assassination. The military tribunal hearing the case convicted her in being involved in the heinous crime, though her exact role is debated. She reportedly helped hide “shooting irons” for the plotters and gave general aid, shelter, and assistance to Booth and his accomplices. She was convicted and hung along. Robin Wright portrayed Mary Surratt in the 2011 film, The Conspirator.

Some historians believe that Mrs. Surratt was in reality being used as bait to draw her son, John Surratt, back to the USA to face trial in her stead. Surratt allegedly was one of the masterminds of the earlier plot to kidnap the president and may have been one of Booth’s closest confidants among his motley gang.

Author Michael Schein tells the story of Surratt and his mother, and the government’s case against them, in his fascinating new full-length biography, John Surratt: The Lincoln Assassin Who Got Away.

John Harrison Surratt, Jr. was born on the “Foxhall” estate in Maryland on April 13, 1844. His parents owned and managed a nine-room tavern on a 287-acre plot of land. At the age of 11, he and brother were sent off to a private school in Port Tobacco, Maryland, where he got to know the countryside rather well. As a young man, he became fast friends with Louis J. Weichmann, whose later testimony during the Lincoln conspiracy trial went a long way in dooming Mary Surratt to the gallows.

During the Civil War, Surratt served in the Confederate Secret Service and spied on Union troop movements in the Potomac River region. He at times carried dispatches at times hidden in the heel of his boot, or withing the planks of his buggy. After his father’s death, Surratt became the postmaster of his area. In December 1864, an acquaintance named Dr. Samuel Mudd introduced Surratt, who was then rooming with Weichmann, to famed actor John Wilkes Booth. Supposedly, Surratt later agreed to help Booth kidnap President Lincoln in an effort to advance the Confederacy’s cause.

Later, when Booth killed Lincoln in April 1865, Surratt denied any knowledge of a plan to assassinate the president and claimed he was in Elmira, New York, at the time of the Ford’s Theater shooting.  When he learned of the assassination, Surratt fled to Canada where he found asylum with a local Catholic priest. He remained there while the U.S. government arrested, tried, and executed his mother. Surratt later traveled to England under an assumed name and eventually joined the Papal Guards.  An old friend encountered him and turned him in to authorities. Surratt was arrested, but escaped and hid in Italy and then Egypt before being arrested again.

In 1867, he was returned to the USA to stand trial eighteen months after his mother’s execution. A civilian court in Maryland tried the case. Surratt’s attorney admitted his client’s role in the kidnapping plots, but strongly denied any knowledge or involvement in the murder plot. The jury count not agree on a verdict, and Surratt was set free after a mistrial was declared. Surratt later gave a lecture admitting the kidnapping plans, but again denying that he knew anything about Booth’s change of plans. He later taught school, married, and raised a family of seven children. He died in 1916 and is buried in Baltimore.

Michael Schein’s new book is a very important addition to the historiography of the Lincoln assassination. The definitive biography of John H. Surratt, this work is deeply researched, well written, and highly informative. Schein gives us an excellent sense of Surratt the man, as well as examining the legend and myths surrounding his involvement in Booth’s plans.

“No man could possibly live long enough to live down being John Harrison Surratt,” Schein observes. People who suspected he was an active participant in the plot would often cross the street rather than share a sidewalk. A handful of friends and co-workers supported him, as did his wife and family. His was a complex life, one that Surratt finally put down on paper as he wrote his memoirs. Unfortunately for history, he consigned his manuscript, notes, and papers to the furnace before he died.

It is left, therefore, for historians to piece together the John Surratt story. It is a task more than capably filled by Michael Schein in this interesting, entertaining, and fast-paced new book.

For much more on this book, see the author’s website. 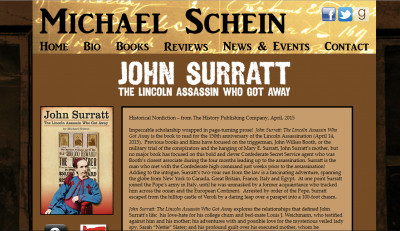