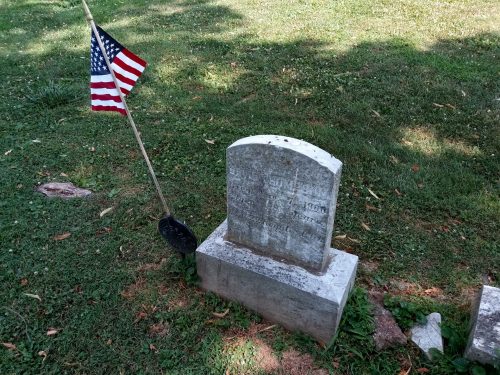 Today, Cannonball is featuring a guest post by longtime Hanover-area resident John T. Krepps. He is a Licensed Battlefield Guide at Gettysburg National Military Park and is one of the foremost experts on the June 30, 1863, Battle of Hanover. He has researched soldiers from the Hanover region who served in the 130th Pennsylvania Infantry during the Civil War. In the course of his study, he discovered that at least one African-American man from Hanover, David Thompson, served in Company B of the 22nd United States Colored Troops. That was a regiment of Black men serving under white officers starting in the summer of 1864, a year after the cavalry fight at Hanover.

Several years ago, I was conducting research on Civil War soldiers buried in Mount Olivet Cemetery, Hanover, PA.  One day I discovered a gravesite that immediately caught my attention.  The headstone identified the man as David Thompson, Co. B, 22nd U. S. C. V. I.  (United States Colored Volunteer Infantry.)  I had never heard of an African-American Civil War soldier from Hanover, and my curiosity was further heightened by the fact that none of the local historians I consulted knew anything about Thompson; he appeared to be a complete “mystery man.”

While there will be much about this soldier that we will never know, several personal facts can be gleaned from his pension file and compiled service record in the National Archives, along with various census and tax records.  In combination with the chronicle of service rendered by the 22nd United States Colored Infantry Regiment, a compelling story can be told regarding the role of this Hanover area soldier in the U. S. Civil War.

David Thompson was born in Carroll County, Maryland (date unknown).  It is unclear when he moved to Pennsylvania, but statements by David indicate that by 1863 he had resided in Heidelberg Township, York County, for at least five years.  By that time David was approximately 38 years old, and his wife Mary was approximately 40.  By 1863, they had been married several years and had four children: Samuel, Hannah, Emily, and Abraham, whose ages in 1863 would have been approximately 19, 17, 6, and 1, respectively.  (Those approximate ages surmised from evidence in the 1870 census.)

On December 12, 1863, David enlisted in the 22nd U. S. C. T. Regiment.  (The regiments that were formed under the direction of the Bureau of Colored Troops were often referred to as U. S. C. T. regiments.)  The following description of David was given at the time of his enlistment:

By the time the war ended the 22nd was U. S. C. T. would see action in some diverse geographical locations and also be assigned to some very unique duties.  The regiment was organized in Camp William Penn, Philadelphia, beginning in January 1864.  By April of that year the 22nd was integrated into the Eighteenth Corps, Army of the James.  In May and early June, the regiment participated in various unsuccessful attempts by Gen. Benjamin Butler to threaten Richmond and Petersburg.

The regiment’s first major combat occurred when Gen. William Smith, commander of the Eighteenth Corps, was ordered to launch attacks against Petersburg.  The outer defense for Petersburg was an imposing ring of earthworks known as the “Dimmock Line”.  This position could be described as a large fort, but in early June of 1864 the Confederates holding it had one big disadvantage – at that time, they did not have the numbers to adequately cover such a long defensive perimeter. (A situation that would change significantly in the next several days.)  On the evening of June 15th Union forces, including several U. S. C. T. regiments, assaulted this undermanned, but still very formidable position.

During this assault, David Thompson was wounded when a bullet or shell fragment struck the U. S. plate of his belt.  Possibly the belt plate saved his life; but the plate was driven into his abdomen causing a serious wound.  He claimed that although he was “knocked senseless” at that point, he recovered and assisted in the attack.

Union troops captured over a mile of the “Dimmock Line” that evening, including several batteries that were part of that Confederate defensive perimeter.  Unfortunately, Union forces were not able to follow up on these initial gains.  Breakdowns in coordination the next few days, along with stiffening Confederate resistance, would buy enough time until much larger numbers of Southern troops reached Petersburg.

Several U. S. C. T. regiments had taken part in the attacks and their conduct had not gone unnoticed.  Chaplain William S. Hunter of the 4th U. S. C. T. declared that June 15th was “the day when prejudice died in the entire Army of the U. S. of America.  It is the day when it was admitted that colored men were equal to the severest ordeal.”  While Hunter’s hopes regarding the death of prejudice against Black troops were certainly idealistic, the actions of these regiments (and many more acts of courage and heroism by U. S. C. T. units) would have a lasting impact in Union military circles.

Meanwhile, David spent at least five months recuperating from his wound in Virginia hospitals, rejoining his unit in late 1864.  In December of 1864 his regiment was assigned to the newly formed Twenty-Fifth Corps (a corps composed entirely of African-American regiments).   In the spring of 1865 the 22nd U. S. C. T. participated in the capture of Richmond and was one of the first regiments to enter the city on April 3.

The assassination of President Lincoln had a profound impact upon many African-American soldiers and the men of Thompson’s regiment may have been effected most of all. Orders were sent from Washington for one U. S. C. T. regiment to be selected to participate in the funeral ceremonies.  Gen. Godfrey Weitzel picked the 22nd on “account of its excellent discipline and good soldierly qualities.”  At least one correspondent noted that same discipline and skill shown by the troops during their ceremonial duties in the Lincoln funeral procession.

It is interesting to ponder what David’s emotions might have been during the funeral proceedings.  And, this event was not the only military exercise relating to the president’s death that involved the 22nd U. S. C. T.  – a few days later the regiment joined the hunt for John Wilkes Booth.  From April 23 – 27, the men scoured the Maryland countryside along the lower Potomac in pursuit of the assassin, usually moving in a widely dispersed skirmishing formation.  When word was received of Booth’s fate, the regiment was ordered back to Virginia.

By the summer of 1865 a completely different phase of service began for the 22nd U. S. C. T.  The regiment was assigned to duty along the Rio Grande as U. S. troops tried to establish security along the Mexican border.  David did not participate in this operation, however, as he had been honorably discharged at Fort Monroe, Virginia on June 24, 1865.

For the next few decades after the war David lived at various addresses in and around Hanover.  In 1868 he resided in Adams County, as shown by the tax assessment book of Conewago Township.  According to Federal Census records, he was still residing in Adams County by 1870.  (His placement in that census seems to indicate that he resided just east of McSherrystown, very near the Adams/York county line.  See 1870 Federal census – Conewago Township, Adams County, Family #85, dwelling place #85.)

Sometime during the 1870’s David moved back to York County.  Apparently, a significant part of his post war years was spent living and working in the Hanover Borough.  When he applied for a federal invalid pension, a few individuals who resided on Frederick Street gave testimony on his behalf and claimed to be his neighbors.  Although his specific address at this point is unknown, clearly David had established a number of social and working ties with Hanoverians.

For most of the 1880’s David resided in Penn Township, probably very close to the Hanover Borough.  (See 1880 Federal Census Penn Township, York County – Family #190, dwelling place #190.)  In the 1886 Penn Township tax assessment he was cited as owning 3 acres of land.  (The only citation of real estate ownership I have been able to locate.)

By this time it is unlikely that David’s health would have enabled him to work a plot of land without significant aid.  Although the war had ended, the effects of his wound had not.  Like many injured veterans, his injury was crippling; he frequently experienced intense pain and some rather grisly symptoms.  One of his physicians, Dr. Joseph Bittinger, stated that David was sometimes confined to his bed for weeks and “at various times suffered most intensely” from the effects of the injury.  Bittinger further testified that during one two-year period David was bed ridden “almost constantly suffering severe pain and had alarming hemorrhages from his stomach.” 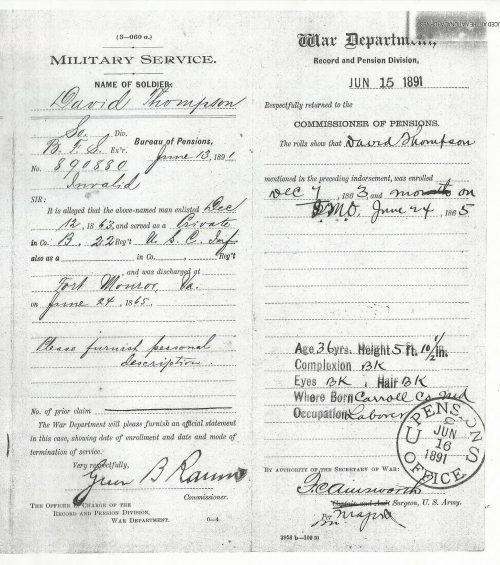 David filed a claim for a federal invalid pension, and was granted a monthly payment of $10.  During the 1890’s he enlisted an attorney in Washington, D. C. to try to secure an increase in his pension.  Although several attempts were made the increase was rejected.  Unfortunately, he had previously made a statement to a medical examiner admitting of “former intemperance”.  According to officials in the Bureau of Pensions, this statement caused a “reasonable doubt” that David’s “present total disability is not caused to some extent by the habits above referred to.” 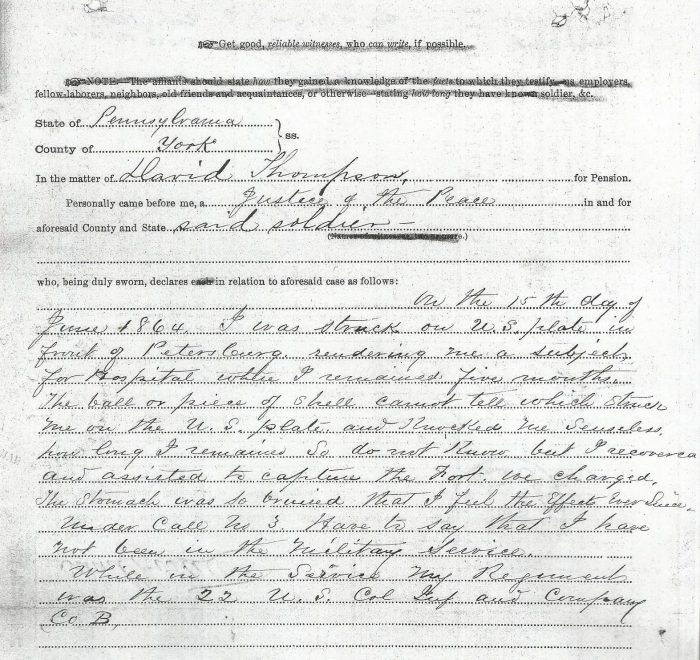 If David did have a drinking problem, it is certainly understandable.  By that time he was not only in intense physical pain, but emotional anguish as well.  His wife, Mary Jane, died on July 11, 1893 and her death was not the only tragic event the family had to deal with.  Evidence in David’s pension file suggests that by 1898, his two daughters had also passed away.  (I have not been able to discover the whereabouts of his two sons at this point.) 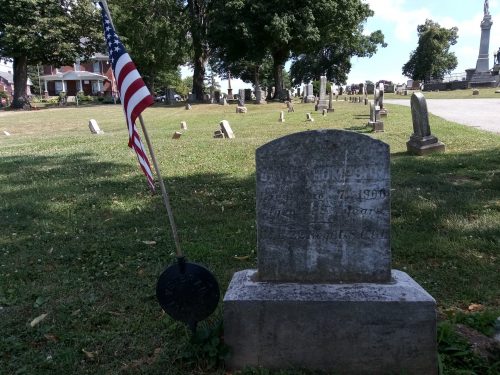 David Thompson died on Oct. 26, 1900 and is buried in Mount Olivet Cemetery, Hanover, Pa.  His story is unique in some ways and shows the diversity of the soldiers who fought in the war.  The 22nd U. S. C. T. Regiment was largely composed of men from New Jersey and the greater Philadelphia area.  So in some ways, David was something of an outsider even within his own regiment.  He lived his pre-war and post-war years in an area with an overwhelmingly White population.  His family would have faced significant prejudice and much economic hardship.  And yet, David Thompson had justifiably earned the respect of many local citizens.  Several Hanoverians claimed to be his friends and neighbors and gave testimony on his behalf in trying to secure his pension benefits.  Those citizens did what they could to honor his sacrifices; hopefully in today’s society, we also will remember David and his brothers-in-arms.