William C. Goodridge, a free black man, was one of the leading businessmen in mid-18th century York, Pennsylvania, as the Civil War approached. He owned a large mercantile establishment on York’s Center Square, providing a comfortable living for his family. He parlayed his growing wealth into a good social standing in the community, and lived in a fashionable and sturdy brick house on Philadelphia Street. His business interests included a private railroad freight company that hauled his merchandise and other goods from York across the Susquehanna River into Lancaster County and beyond.

Among his most valuable cargo he transported were escaped slaves, coming up from the South via the Underground Railroad network, which thrived among the Quakers in the southern tier of Pennsylvania. Other concerned citizens, including William Goodridge, assisted the process by providing food, shelter, comfort, and transportation for the hundreds of escaped blacks that are thought to have been taken through York County in the decades before the Civil War.

What was William Goodridge’s motivation?

Formerly enslaved, he used his money and position in York’s society to help those less fortunate than himself.

Former slave turned prosperous businessman William C. Goodridge is depicted on one of the many colorful murals in downtown York, Pennsylvania. Photograph from the York Daily Record, which sponsors and host this Cannonball blog

William C. Goodridge’s grandmother was a slave owned by Maryland colonial-era patriot and wealthy landowner Charles Carroll, who had been a signer of the Declaration of Independence. For more on his humble beginnings, and several photographs, please visit Millersville University’s webpage for Goodridge.

I briefly mention Goodridge in my study of the Rebel march through York County to Wrightsville, Flames Beyond Gettysburg: The Gordon Expedition, June 1863. A History and Tour Guide (Columbus, Ohio: Ironclad Publishing, 2009).

“William C. Goodridge owned the other eye-catching multi-story store on the square. The son of a Maryland slave, the free black businessman had for several years reportedly shipped escaped slaves across the Columbia Bridge hidden in his freight cars. Some Yorkers speculated that Goodridge’s emporium and his Philadelphia Street house actually were hiding places for runaway slaves passing through town.”

Goodridge was apparently not in town during Major General Jubal A. Early‘s stay of less than forty-eight hours in downtown York. Author and fellow blogger Jim McClure has speculated that he may have left town in advance, as did more than 1,800 other black residents of southern Pennsylvania who feared that they might be captured and taken to the South to be sold as slaves. Goodridge, as a former slave himself, may have keenly felt this threat, perhaps even more so than his Pennsylvania-born black fellow Yorkers. 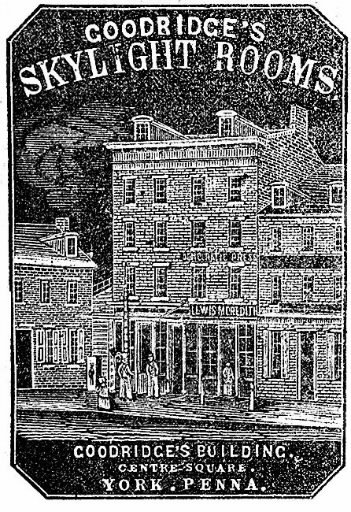 William C. Goodridge owned this large building on the southwestern corner of York’s Center Square. The building was long ago torn down to make room for an even larger building. Courtesy of the York County Heritage Trust.

Much more on Goodridge can be found on the Internet, including the popular Explore PA History website which discusses the man and the wayside marker that commemorates his life.