The Wrightsville-Columbia PA area is rich in history, with the canals, railroads, the Susquehanna River, the 19th-century lime kilns, and the long-defunct iron smelting and foundry industry. During the mid-1800s, the area was vibrant and bustling with activity, and jobs were plentiful. Workers flocked to the area, often bringing their families and settling in the river towns.

Among the larger places of employment was the Maultsby-Case Rolling Mill, a sprawling complex in Columbia owned and managed by William G. Case. Hundreds of black men worked there, providing reliable labor, as reported by several observers in newspapers and journals of the era. A pre-war newspaper editor was pleased to see black men laboring side by side with whites at the furnaces in the region, digging ore, boating coal, standing at the helm of burden boats, piling blooms, pigs, and the like. “This is just what I desire to see, and is what will make them respected as men.”

These men would also prove reliable on the battlefield, which would earn them even more respect from their white peers.

A few of the men from the rolling mill had quit their jobs early in 1863 to enlist in the 54th Massachusetts Infantry, an all-black regiment raised in various states including Pennsylvania and New York; they would serve under white officers. They were in South Carolina when the Rebels threatened the Keystone State in June 1863. Most of the one hundred or so remaining black men from the Maultsby-Case operation answered a call from their supervisor, William Case, to action. They marched across the mile-plus-long Columbia Bridge and helped did entrenchments and rifle pits west of Wrightsville, as well as helping construct “Fort Case” near Shawnee Creek in Columbia. When the 27th state militia arrived, all the volunteers, black and white, were dismissed and sent home. 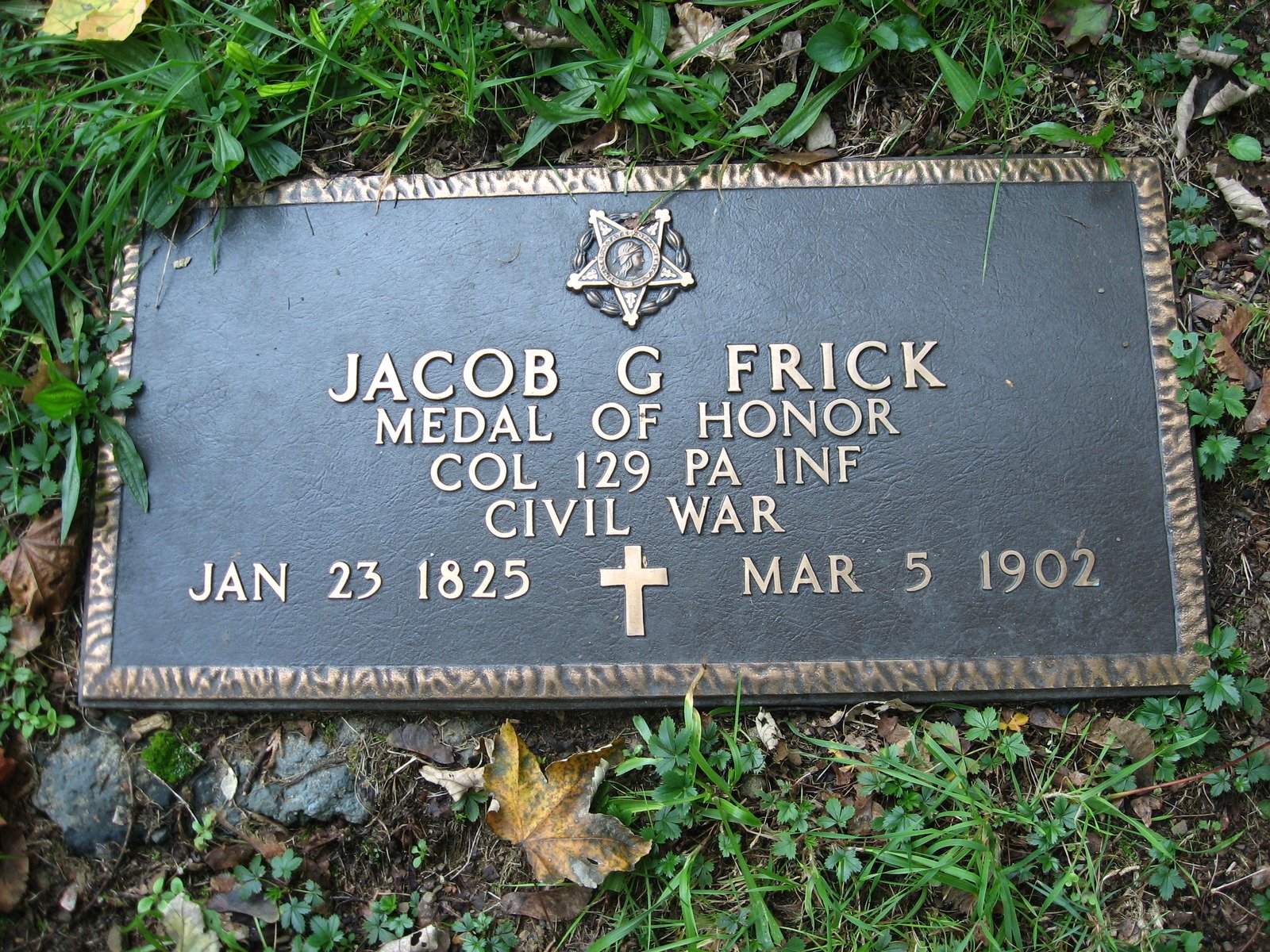 However, on Saturday night, June 27, nearly 175 Columbians, including 53 of the black men, marched off in four companies for Wrightsville, bolstering Colonel Jacob G. Frick‘s extended line about midnight. Many of these men had helped erect Fort Case, a temporary bastion on the eastern riverbank. Lieutenant Francis B. Wallace, a Pottsville newspaper editor turned emergency soldier in the 27th PVM, reported that these volunteers “presented a motley appearance, attired as they were in every description of citizens’ dress. They were armed with the old musket altered to the percussion lock.”

On Sunday morning, when reports circulated that the Rebels were marching in force toward the Union defenses, Colonel Frick watched in dismay as the three companies of white civilians headed back into Wrightsville instead of spending their Sabbath digging earthworks. Lieutenant Wallace noted sarcastically, “Sunday morning’s sun saw us still undisturbed, and witnessed the departure to Columbia of the white companies of citizens to get their breakfasts. They must have become entirely absorbed in that interesting duty, for they forgot to return. The company of colored men remained with us, their palates either being smaller or their courage greater than that of the good burghers of Columbia.”

The black volunteers formed a line, received entrenching tools from Quartermaster William Patterson, and started digging. Frick later reported that he was “pleasantly surprised” by their willingness to assist. Several men of the 27th Pennsylvania Volunteer Militia had left coal mines in northern Pennsylvania to become soldiers, and now they once more wielded picks and shovels, working alongside the black civilians. Wallace commented, “No men on that day worked more faithfully or zealously, than the colored company–Their conduct elicited the admiration of all who saw them.” 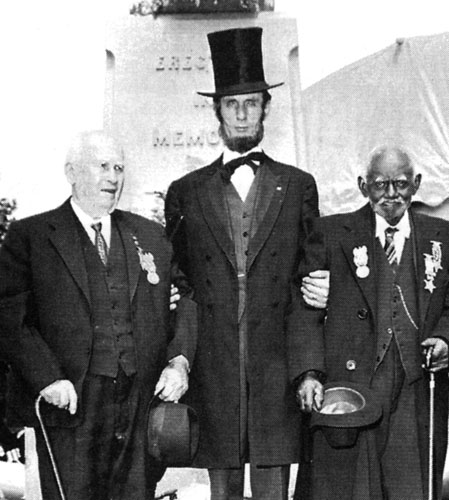 Two aging Civil War soldiers flank a Lincoln impersonator. The black veteran is John Aquilla Wilson, known as ‘Quil,’ of Fawn Township in southeastern York County. He enlisted in the United States Colored Troops, 32nd Regiment, in 1864. Wilson died at the age of 101. The man on the left is John Eich, the last Civil War veteran in the city of York. Photo from fellow blogger Jim McClure’s popular York Town Square blog.

Alongside the uniformed soldiers of the 27th Militia, the company of free blacks continued digging entrenchments. Among them was 15-year-old John Aquilla Wilson of York County. These volunteers came primarily from the Columbia Rolling Mill and were well accustomed to hard labor. Moreover, it took considerable courage for Captain Case’s blacks to take up arms against the oncoming enemy. A few must have questioned their possible fate should they fall into Confederate hands while serving under Federal officers. As non-uniformed civilian home guardsmen, they might not be treated as prisoners of war. In all likelihood, they would receive shackles and a trip into slavery. Blacks toting guns were not common sights in the South, and none of them knew what a vengeful Rebel might do if they were captured. The men toiled on, keeping their muskets and ammunition stacked nearby in case the Rebels suddenly appeared.

When the shooting started about six o’clock on Sunday evening, the blacks laid down the picks and shovels and leveled their muskets at the oncoming Georgia infantrymen of Brig. Gen. John B. Gordon’s veteran brigade. There was no panic among them, even when one black man was killed when an artillery shell fragment struck him in the head. When Colonel Frick’s order eventually came to withdraw across the bridge to Columbia, they retreated in good order, unlike some of the uniformed state militiamen.

Once on the eastern riverbank, Captain William Case’s company of black volunteers was still intact, surprisingly considering their lack of combat experience. The majority camped on a hill along Third Street, behind Columbia. Major Haller detached a portion of the company to guard a ford. They marched out to their new post, bearing themselves like veteran soldiers and earning more admiration from the veteran officers of the 27th Militia.

Once the majority of the militia was safe across the river, Colonel Frick gave orders for the bridge to be blown up. An “old black man” had been patiently waiting on one of the piers to light the fuse. He had been calmly smoking a cigar while watching the distant activity in Wrightsville. He touched the end of his stogie to the fuse, made sure it caught fire, and then joined the exodus to Columbia. However, the resulting explosion failed to drop the bridge span into the water, and Frick resorted to burning the old structure to prevent the Rebels from following his men into Columbia. He thereby averted a bloodbath in the streets of that town.

Despite the loss of the bridge and several businesses and houses in Wrightsville that burned in the ensuing conflagration, the events did have one favorable outcome: new-found respect for the black volunteers. They had shouldered arms alongside the white soldiers and performed courageously. They had not been among the frightened men who had walked away before the skirmish. Lancaster’s Examiner and Herald trumpeted that “the only Columbia volunteers in the fight were fifty-three negros, who after making entrenchments with the soldiers, took muskets and fought bravely.”

In his official report, Colonel Jacob Frick praised the excellent conduct of these black civilians. “After working industriously in the rifle-pits all day, when the fight commenced they took their guns and stood up to their work bravely. They fell back only when ordered to do so.” Lieutenant Francis Wallace wrote to his Pottsville newspaper on June 30, “All honor to the colored men of Columbia. They will die in defense of life and liberty, which is more than a majority of the whites here seem disposed to do–the cravens.”

The commander of the Department of the Susquehanna, Major General Darius N. Couch, had kind words for all the volunteers who answered his call to arms to defend the river region. “The militia of Pennsylvania raised to resist the invasion was composed of all classes and professions, and was a fine body of men.” Thankful for the hundreds of Harrisburg residents who constructed earthworks, Couch added, “Some of the patriotic citizens of that city volunteered to work in the trenches; others were paid. The colored population were not far behind their white brethren in giving assistance.”

Unfortunately, the name of the heroic black volunteer decapitated by the Rebel artillery at Wrightsville has been lost to history; no press coverage accompanied his funeral or burial. Columbia’s black cemeteries and churches did not keep detailed records during this period, and the borough did not start keeping civil records on deaths and burials until years after the war. No diaries or other letters reveal the unsung hero’s name. The only existing muster roll for the Columbia volunteers is from November, well after the skirmish.

Some blacks who shouldered muskets in the earthworks, including young John Aquilla Wilson of York County, later enlisted in three-year U.S. “Colored” regiments and served in the South. Other blacks left the region for good, their lives forever altered by the Confederate expedition. Census records and property records indicate that in 1860, 186 blacks lived in Gettysburg. By 1870, only 74 of these same citizens remained in the borough. Fearing conscription into slavery, many left the rural counties during the invasion and moved to larger cities such as Harrisburg or Philadelphia, never to return.