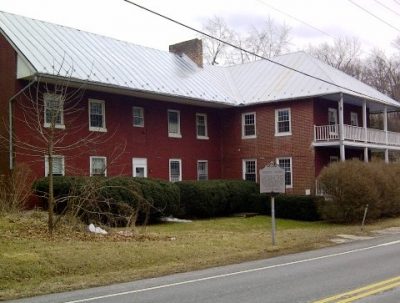 Long before the construction of Interstate 83, the York Road was the main thoroughfare between York, Pennsylvania, and Baltimore, Maryland. The well traveled road predates colonial times. Hungry and thirsty travelers could find rest and refreshment at roadside  inns, including the Gorsuch Tavern which still stands at 15911 York Road near Sparks, MD. Soon after the road was upgraded to an inter-state turnpike in 1810, Dickinson Gorsuch planned to build a tavern/country store on a piece of the “Retirement” estate of his kinsman, John Gorsuch. It was to be located at the 19th mile marker on the east side of the York Road. Construction began in 1813 according to period records (the wayside marker is incorrect).

In 1817 another relative, a Baltimore-based sea captain named Joshua Gorsuch, acquired the house and associated 27-acre parcel of ground. He sold dry goods and liquor in the facility. Various family members held title to the tavern for the next few decades.

In the autumn of 1851, Edward Gorsuch and others of his clan met inside the tavern to plan a lengthy journey into southern Pennsylvania to reclaim several escaped slaves.

That ill-fated conference was the genesis of the raid in Lancaster County which resulted in the so-called “Christiana Riot.” 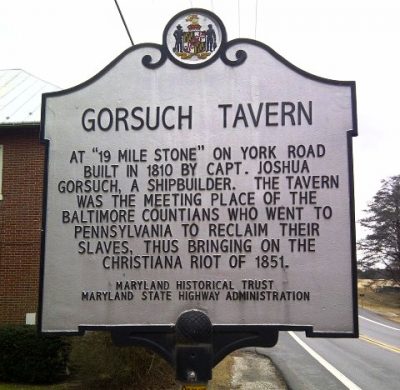 Edward Gorsuch, his son, other relatives, and several other men discussed the situation for some time. They agreed on a plan of action which included obtaining legal permission to reclaim the property. They would also seek help from the U.S. Marshal’s office. Gorsuch lived on his “Retreat” farm across the street from the family tavern.

Gorsuch on September 9, 1851, appeared before the United States Commissioner, Edward D. Ingraham, in Philadelphia and asked for warrants under the Fugitive Slave Act of 1850 to recover four escaped slaves which he had heard were hiding in Lancaster County, PA.

On the night of the 10th, Gorsuch, his 25-year-old son Dickinson, a nephew Joshua, and several others, including a deputy U.S. marshal, met at Downington. There, they expected to rendezvous with two other colleagues who were supposed to be on the train from Philadelphia. When the duo failed to appear, the party journeyed to Gap and then walked through the night to Christiana, where supposedly two of the refugees were living at the house of a black farmer named William Parker (himself an escaped slave).

They arrived at Parker’s remote stone house, inspected their weapons, and ate some crackers and cheese while they planned their attack. Before daybreak on the 11th, they demanded the surrender of the slaves else they would burn the house and shoot its occupants. Two or three times members of Gorsuch’s party approached the home, but were unable to make entry. Parker’s wife Eliza repeatedly blew a horn from the garret window to summon help, and soon more than fifty neighbors, black and white, arrived with a motley assortment of weapons from guns to pitchforks.

The ensuing standoff turned violent and Edward Gorsuch fell with mortal injuries.  Parker’s brother-in-law Pinckney seriously wounded Dickinson Gorsuch with a blast from a double-barreled shotgun. Joshua Gorsuch dropped as well. By then the rest of the party, including the deputy, were in full retreat. William Parker, his family and in-law, and Gorsuch’s two slaves fled the scene, eventually making it to safety in Canada with the assistance of abolitionist Frederick Douglass.

A grand jury in Philadelphia indicted 37 Lancaster Countians on 117 counts of treason, but lacking sufficient evidence as to guilt, they were set free. However, the tragedy sparked retaliation and bitterness along the Pennsylvania-Maryland border. Northern abolitionists found the Christiana Riot to be a convenient recruiting tool to gain more adherents to their viewpoint. Southerners and pro-Fugitive Slave Act Northerners were appalled and indignant that not one person had been convicted.

The fallout from the September 11, 1851, riot and subsequent events helped fuel the great ideological divide which later erupted in a civil war.