York Civil War researcher and author Dennis W. Brandt is perhaps best known for his award-winning book on the 87th Pennsylvania Infantry (From Home Guards to Heroes). He has also spent countless hours collecting information on Civil War soldiers from York County and the surrounding regions. He graciously donated an extensive Microsoft Excel spreadsheet to the York County Heritage Trust for use by the public on their website. This database contains muster information, marriage and family information, burial sites, service highlights, key dates, etc. for thousands of soldiers from this area.

Among them is Henry Bear.

At the start of the Civil War, Bear was not someone who would have been accepted in the newly formed volunteer infantry regiments. He was not a white man, and at the time, governors across the North as well as the War Department in Washington were loathe to enlist non-Caucasians into the ranks. Over time, the government began forming military units from free blacks (in the North) and former slaves (primarily in South Carolina and Louisiana) in areas occupied by the Union army. Locally, a company of black men formed a home guard company in the Wrightsville and Columbia region, but the state did not accept them as mustered troops. Nevertheless, they fought with distinction in the defense of the strategically important covered bridge over the Susquehanna River.

The success later that summer of the 54th and 55th Massachusetts in proving that black men under white officers could be viable combat troops led to the government forming large numbers of regiments and even entire brigades and divisions of black soldiers.

Enter Henry Bear and scores of other young black men from the Susquehanna Valley. 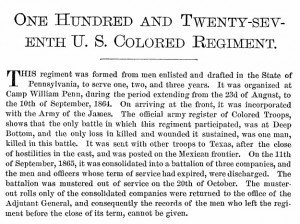 The 127th United States Colored Troops was formed of enlistees and draftees in Pennsylvania in the late summer of 1864. The recruits were organized into a regiment at Camp William Penn near Philadelphia from August 23 until September 10. The field officers (all white) included Colonel Benjamin F. Tracy and Lieutenant Colonel James Givin.

According to Dennis Brandt’s database, Henry Bear was born on August 27, 1833. His father Isaac Bear was a mulatto and his mother Mary (Cunningham) Bear was of French and American Indian ancestry. He had five siblings: Isaac, Nathaniel, Sylvester, Albert, and Margaret.

He married Elizabeth Cowens on July 3, 1856, in Marietta; they had one child, a son also named Isaac who was born in 1863. At the time that Bear enrolled in Harrisburg on September 6, 1864, the 31-year-old Wrightsville man was 5′ 5″ tall, with black hair and eyes. He listed his occupation as a laborer and his net worth as $50. He was illiterate.

Corporal Bear and his comrades in Company I received uniforms, weapons, accoutrements, and training before being sent to City Point, Virginia, where they and the rest of the 127th USCT were incorporated into the Army of the James. They served in the trenches at Petersburg and participated in the Battle of Deep Bottom, where the regiment lost its first man to enemy fire.

Bear would not escape the war unscathed, unfortunately. During the final breakthrough assault on the Petersburg lines on April 2, his eyes were damaged by the nearby explosion of a Confederate artillery shell. He was hospitalized at Fortress Monroe and began the long, slow road to recovery.  Robert E. Lee’s Confederate Army of Northern Virginia surrendered just days after Bear’s injury. On June 22 Bear was discharged via surgeon’s certificate of disability. His comrades, however, still had time to serve until their term of enlistment expired. The 127th USCT was sent to Texas and posted on the Mexican frontier until it was mustered out on October 20.

Henry Bear returned to Wrightsville, fathered four more children, and died at the age of 65 on April 25, 1899. He is buried beside his presumed second wife, Lauretta M. Bear, in Mount Pisgah (Stone Church) Cemetery just southwest of Wrightsville.