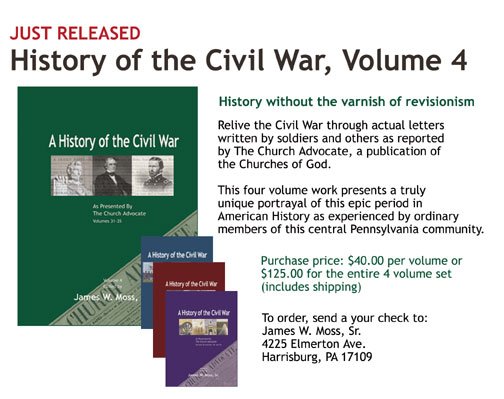 Jim Moss, Sr. has collected the material about the Civil War that was recorded in the Church Advocate from May 1859 until January 1, 1870.  This covered nearly the entire tenure of E. H. Thomas as editor.  This effort is called a primary source by historians because it was what was being written at the time.  Of significant value are the 266 letters written by soldiers who were acting as Correspondents for the Advocate.  There are reports of battles, articles about significant personages, editorials, and obituaries of Church of God men who fought and died.  The Advocate reported the deaths of 124 Church of God men during the war.  Only heaven knows how many more died and were not reported to the Advocate.  G. U. Harn was the most prominent person in the denomination to have given his all.  It is my best estimate that 1/3 of the assigned pastors at the beginning of the Civil War either enlisted or were drafted in the Union Army.  The information is undoubtedly Christian, abolitionist, pro-Northern, and very supportive of Abraham Lincoln.  It is not always historically accurate but that is not the purpose of this project. Jim calls it a history without the varnish of revisionism.
Jim had a very special privilege to be interviewed by Chuck Rhodes on ABC News Channel 27 in Harrisburg regarding this just completed Civil War project.  To view, click on this link.  http://www.abc27.com/video?clipId=6635945&autostart=true   There is also a link on his website at JimMoss.org.