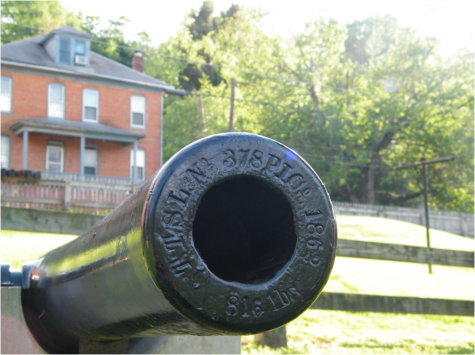 The tiny hamlet of Hanover Junction in southern York County is perhaps best known today as a stop on the Rail Trail, with restrooms, parking, and shade. During the Civil War, it played an important role as both a railroad and telegraph interchange. A telegraphy school produced several well trained young operators who fanned out to other area telegraph offices, spreading the new form of communication. During the Gettysburg Campaign, these stations would provide an important linkage to relay messages to Federal commanders in Washington, Baltimore, York, and Harrisburg. Two railroads intersected at Hanover Junction, the north-south running Northern Central Railway and the east-west Hanover Branch Railroad. A cavalry raid in June 1863 temporarily suspended both telegraph and rail service.

Here is an e-mail from Ivan Frantz, the secretary of the PDC:

“After being removed from Penn Park in York in 1975, and being in storage in various garages of Capt. E. M. Ruhl Camp #33 members for 32 years, the Model 1861 3” Ordnance rifles are now back on display. On Monday, August 6th, the four barrels were placed on new concrete pedestals at the Hanover Junction train station along the York County Northern Central Heritage Rail Trail.

“Trunnion caps are still in the process of being made for the bases.The trunnion caps along with one more coat of fresh paint will be applied to the barrels in the near future. The members of Camp #33 and the Director of York County Parks are working on planning a rededication
ceremony for the cannon barrels in the future after all of the work is done. Some type of sign explaining the barrels and the involvement of Ruhl Camp #33 is also being looked into for the future.

“Although the Mayor of York wanted the barrels placed back in the city park, the members of Camp #33 would not do this because of the nature of the surrounding neighborhood. County parks was happy to have the barrels placed at Hanover Junction because of its significance in Civil War history, particularly during the Gettysburg Campaign and Lincoln’s visit to Gettysburg in November of 1863.”