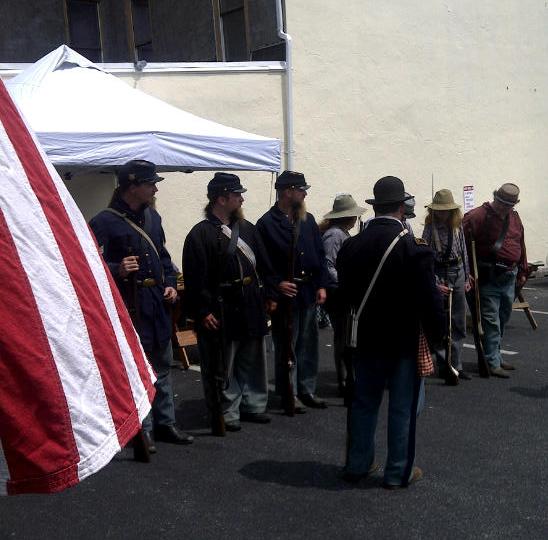 Union reenactors assemble in the parking lot of the York Emporium during the annual “Butternut & Blue” Civil War event held on Saturday, May 5, 2012. The York Emporium, located at 343 W. Market Street (Route 462) in historic York PA, is one of the largest used book stores in southern Pennsylvania / northern Maryland.

Owner Jim Lewin and his wife Pam host the event, which this year included reenactors discussing the hobby and the average life style of a Civil War soldiers, as well as several guest speakers / lecturers. 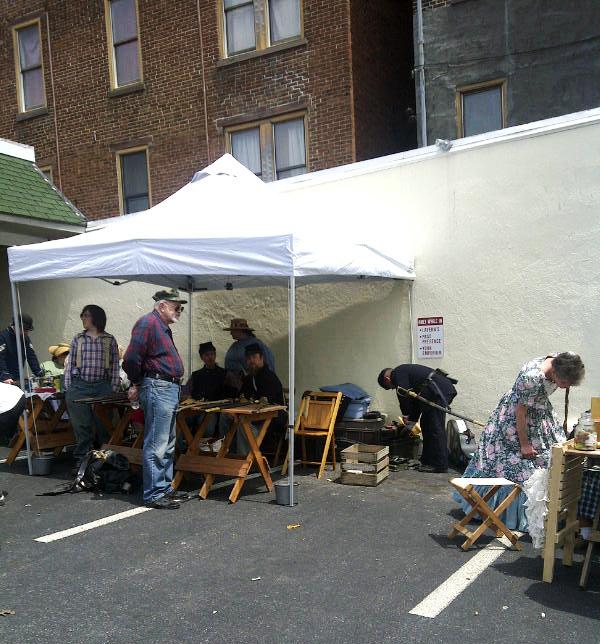 Included in the events for the 2012 edition of Butternut & Blue…

• Author Mark Nesbitt, of Ghosts of Gettysburg fame, discussed his work documenting the spectural activities in and around the battlefield. Afterward he signed copies of his best-selling series of books.

• Scott Mingus, Sr.  spoke from his book, Civil War Voices from York County, PA. Mingus, scientist by trade and historian by avocation, has made a formal presentation during each annual BUTTERNUT & BLUE since its inception in 2008.

• And Walter Carlson, Interim Associate Pastor of Christ Lutheran Church of York,  spoke on the role of Sammuel Simon Schmucker in the battle at Gettysburg. Schmucker, founder of the Lutheran Seminary at Gettysburg, was a famous abolitionist and was active in the underground railroad. As the Army of Northern Virginia approached Pennsylvania, Schmucker sought refuge in his home in York, and for good reason; he was a “person of interest” for the Confederacy.