Another of Jubal Early’s victims in York

In 1863, grocer and shopkeeper John L. Kuehn lived in this brick house at 33 E. Philadelphia Street in downtown York, Pennsylvania. His nearby establishment was a well known landmark in the 19th century, and offered fresh produce and other groceries, as well as notions and other assorted merchandise.
He was busy guy.
According to Gibson’s 1886 History of York County, Pennsylvania, “The Hanover Gas Company received its charter January 8, 1870, and the works were built in the summer of the same year, by John L. Kuehn, of York, along the Littlestown Railroad, near the depot.”
Seven years before Kuehn built the gasworks, his downtown York grocery store entertained several visitors likely from Col. Isaac E. Avery’s North Carolina brigade of Jubal Early’s division. They were Confederate soldiers from the Army of Northern Virginia, which had invaded Pennsylvania the previous week. 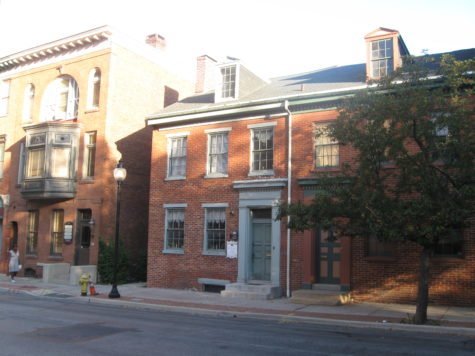 Early’s 6,000 men camped in and around York on Sunday, June 28, 1863, during the Gettysburg Campaign. Among them were nearly 500 cavalry from Virginia, four batteries of infantry, and seventeen regiments of infantry. The North Carolina brigade camped in downtown York at Penn Commons, the old fairgrounds, and in the two market sheds in Centre Square, not far from John Kuehn’s store and his house.

After the Civil War, Kuehn filed a damage claim with the state of Pennsylvania asking for $195 in compensation for goods lost to the Rebels, including large quantities of groceries and tobacco. He was closed that fateful Sunday in June 1863, but armed Rebels accosted him and forced him against his will to open his store. He claimed they “forcibly took and carried away” whatever they wanted.
As with most York Countians, his claim was approved by the legislature, but became entangled in budget cuts and partisan political wrangling.
Some things never change.