A virtual tour of Joanna Furnace near Reading, PA: Part 2 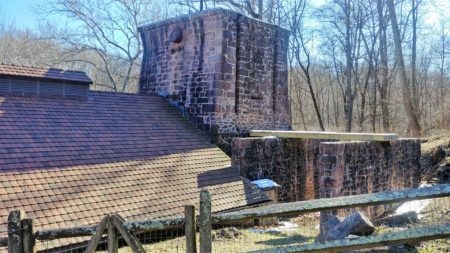 This is a back view of the old furnace stack at the Joanna Furnace near Reading, Pennsylvania. As mentioned in part 1 of this 2-part short series, Joanna Furnace was one a vibrant, profitable producer of cannonballs, door hinges, kettles, and other iron materials, and later, of pig iron sold to foundries until the furnace blew out in 1898. Over the 20th century, the site fell into disuse and the mansion, barn, and carriage house were razed. owner Bethlehem Steel sold the grounds and remaining buildings to the Hay Creek Valley Historical Association, which today still manages the site.

Here are additional photographs I took on a visit to Joanna Furnace on March 18, 2018. 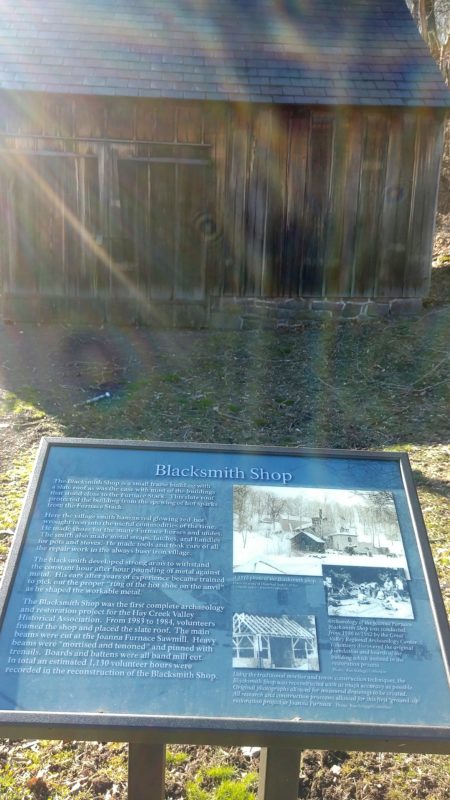 Members of the Hay Creek Valley Historical Association rebuilt the blacksmith shop based upon archaeological excavations and period photographs. 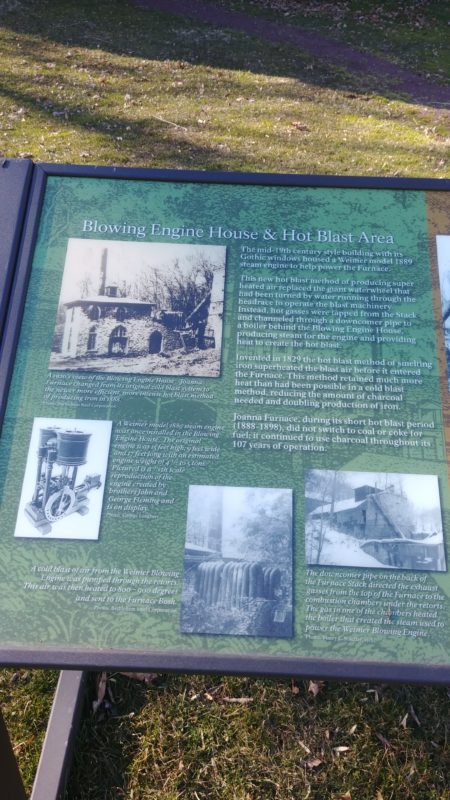 The section of a wayside marker describes the basic process used in the blowing engine house and hot blast area. 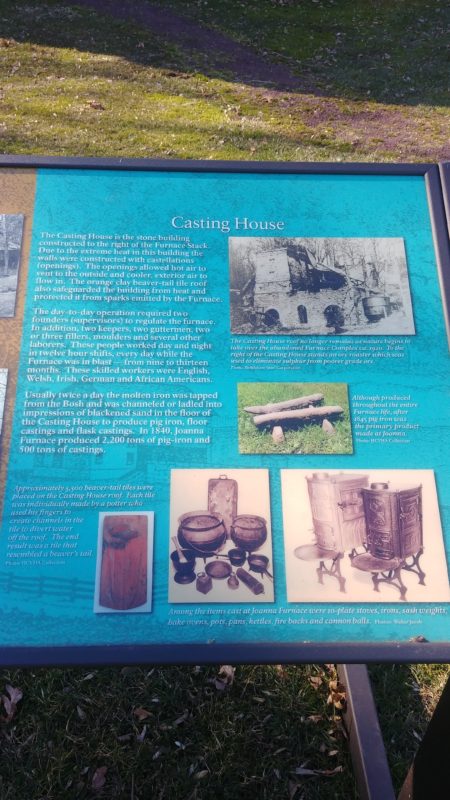 The right section of the same wayside discussed the old casting house, where hot molten iron was formed into pots, kettles, cooking utensils, and the like. 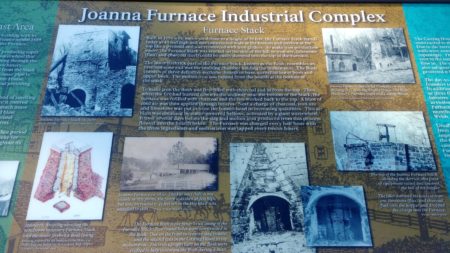 The center of the wayside tells the history of the production and the development of the complex. 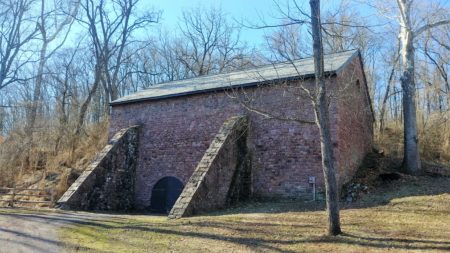 Robeson Township was heavily wooded in the 19th century, giving the ironmaster plenty of raw material to make charcoal. Colliers, many of them black, lived nearby. A few were escaped slaves, and ironmaster Thomas Bull Smith reportedly was a major conductor on the Underground Railroad. 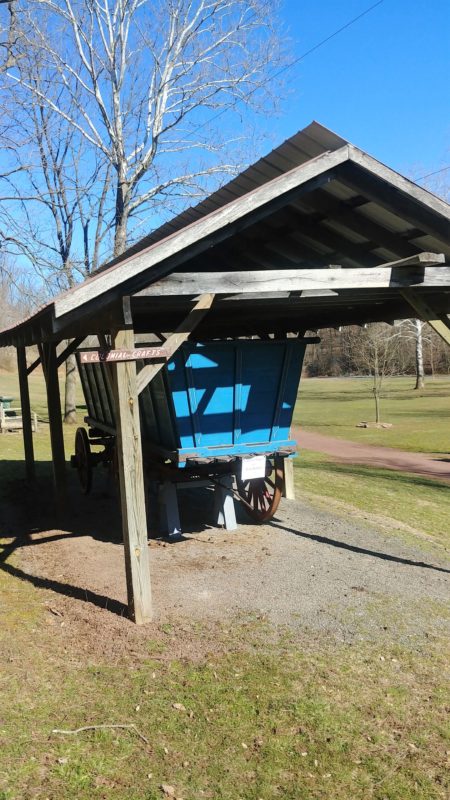 The colliers carried loads of charcoal to the furnace using heavy-duty wagons such as this preserved and restored example. 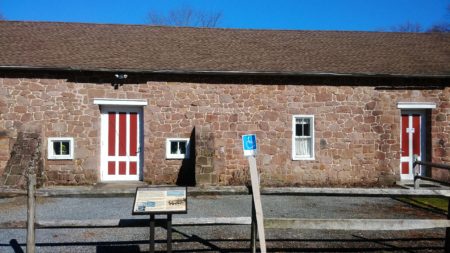 The restored mule stable is now a meeting hall used for HCVHA gatherings, including periodic fiundraiser breakfast buffets. In the mid-20th century, the Phelps family, then the owners of the defunct Joanna Furnace, opened a sewing factory in this building. They added a series of windows on the reverse side to provide natural lighting for the workers. 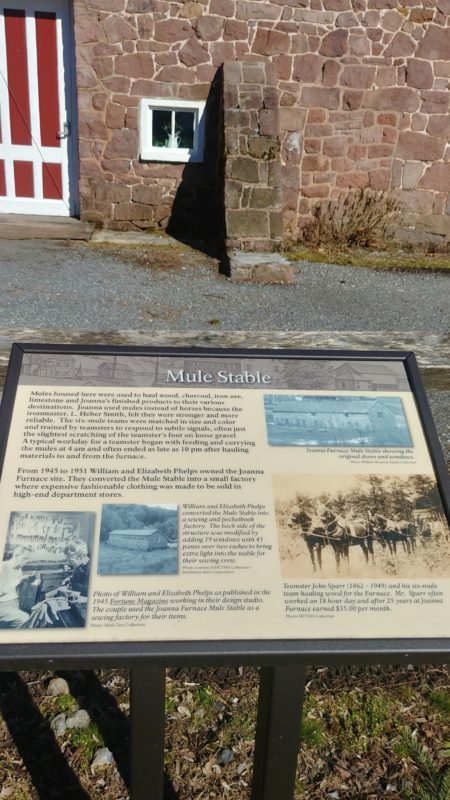 Wayside marker describing the operation of the mule stable and its later usage. 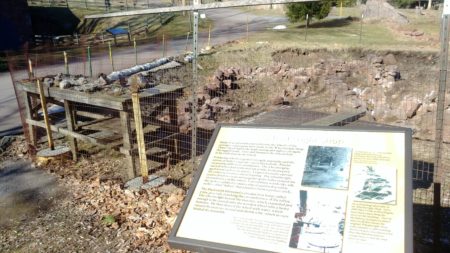 Archaeological excavations are in progress to map the site of the long-gone wheelwright shop.

If you go: Joanna Furnace is a little over an hour from York, PA. Take the Morgantown exit from I-76, the Pennsylvania Turnpike and follow Route 10 North about three miles. You will pass the furnace complex and a large sign on the right. Make a right turn onto Furnace Road and drive less than a half-mile. The entrance to the complex will be on the right. There is plenty of parking (well marked) by the Mule Stable.