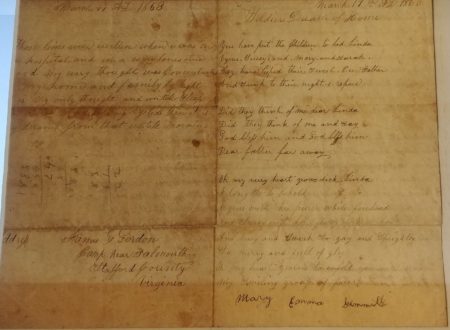 It was March 1863 near Falmouth, Virginia. America had been at war with itself for almost two full years since the bombardment of Fort Sumter. The 130th Pennsylvania, one of the first regiments from York County, had fought in September 1862 at Antietam, where the men first saw comrades fall in combat. Their beloved colonel, Henry I. Zinn, had perished in the carnage at Fredericksburg that December. Levi Maish of Conewago Township had replaced him.

Now, the regiment was stationed near Falmouth in Stafford County, Virginia, helping keep an eye on the Confederate lines across the Rappahannock River. The men only had two months left to serve on their 9-months term of enlistment.

Many soldiers dreamed of returning home.

On St. Patrick’s Day, one of the the homesick men, 30-year-old Private James Edie Gordon, sat down and penned a poignant poem. He was a patient in the army hospital, with plenty of time on his hands to consider how much he missed his young wife, Malinda (Olewiler), and his four small children.

I have reproduced Gordon’s poem here, courtesy of his great-great-granddaughter, Janet Anderson.

“You have put the children to bed, Linda

Cyrus, Gusey, and Mary, and, Sarah

They have lisped their sweet Our Father

And sunk to their nights repose.

Did they think of me dear Linda

Did they think of me and say

I long so to behold

Cyrus with his pure white forehead

And Gusey with her glossy golden hair

And Mary and Sarah so gay and sprightly

So merry and full of life

Oh my heart yearns to enfold them

My smiling group of four

I can bear the noisy day Linda

The camp life gay and wild

Shuts from my yearning bosom

The thoughts of wife and child

But when the night is around me

And under its strong beams

I gather my cloak about me

I dream such long sad dreams

I think of the pale young wife Linda

Who looked up in my face

When the morning I left in her heart

She wished me God speed

I think of four sweet birdlings

Left in the dear home nest

And my soul is sick with longing

That will not be at rest

Oh when will the war be over Linda

When shall I behold

Cyrus with his pure white forehead

And Gusey with her golden hair

And Mary and Sarah so gay and sprightly

So merry and full of life

And more than all the dear wife

Who bore my babes to me

God guard and keep you all Linda

God guard and keep me too

For if only one were missing

What would the other do

Oh when will the war be over

And when shall I behold

Those whom I love so dearly

Safe in the dear home fold”

James Gordon added a personal note, “Those lines were written when I was in the hospital and in a very lonesome mood. My every thought was concentrated on my home and family. By night it is my only thought and until sleep comes to my drooping eyelids when it is my dreams from that until morning.” He had been hospitalized with an ulcer on his lower left leg, according to researcher Dennis W. Brandt, and a severe case of diarrhea. He had later contracted typhoid fever, but recovered.

Two months after penning his poem, Private Gordon was in a field hospital at Brandy Station in May and missed the battle of Chancellorsville. He mustered out from the regiment on May 21, 1863, when his enlistment expired. He later returned to the army in the 200th Pennsylvania, enlisting in September 1864 as a teamster. However, he still suffered from bouts of ill health. He was honorably discharged in late May 1865 and returned home for good.

He and his beloved Malinda had another child in 1876. Gordon suffered from joint pain the rest of his life, but was able to farm and be a carpenter. He died February 19, 1892, in Lower Chanceford Township and is buried in the graveyard of Bethel Methodist Church.

Do you have copies of letters or poems from your Civil War ancestors that you can share with the Cannonball readership? If so, please contact me at scottmingus@yahoo.com.