A Rebel Sunday in York, Pa. 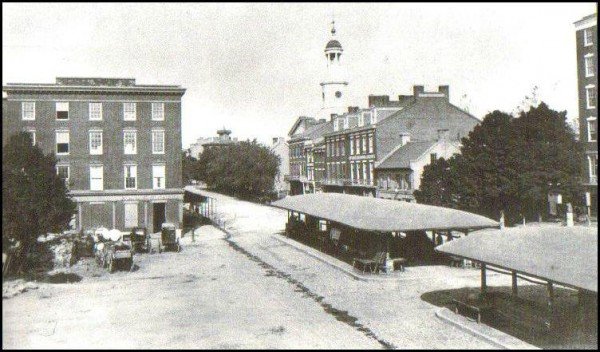 This photo from the files of the York County Heritage Trust shows the old market sheds at he intersection of Market Street and George Street (left) in downtown York, Pennsylvania. The building with the buggies and wagons in front of it is the P. A. & S. Small hardware store, a local landmark throughout the 19th century. The white spire is the old York County Courthouse. Back on Sunday, June 28, 1863, the courthouse would have been the headquarters of Confederate Major General Jubal A. Early, who brought 7,000 men to York. He planted artillery on the hills north and south of town, and extracted $28,610 in ransom money out of a requisitioned $100,000.

Parts of a brigade of North Carolinians camped in these market sheds, as well as in the nearby fairgrounds and U.S. Army General Hospital (the rest of the brigade had been left in Winchester, Virginia, to guard thousands of prisoners taken at the recent Second Battle of Winchester). The Tar Heels spent a pleasant Sunday afternoon strolling York’s streets and conversing with the locals.

Here is a seldom seen account of these interactions, taken from the pages of the Baltimore Daily Gazette, a wartime successor to the defunct Maryland News Sheet. It includes some rather interesting dialogue between the townspeople and some black servants of the Confederate officers.

The statements are from the paper’s York correspondent. 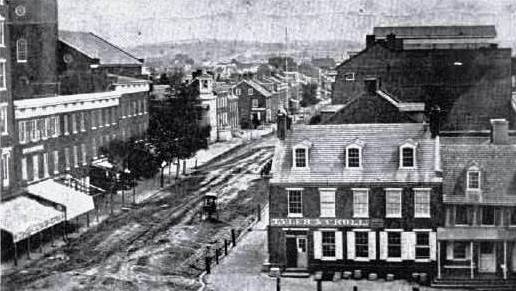 A companion view from the York County Heritage Trust shows S. George Street from the square. Christ Lutheran Church on the left is still an active ministry point.

Here is a section from the reporter’s lengthy description of the Rebel occupation of York:

“About noon the town and county swarmed with Rebels off duty. They talked freely with the citizens on the war and its kindred subjects; professed much confidence in their generals and much contempt for ours, except McClellan–saying we did not leave one in long enough to learn anything but to get men slaughtered; had no thought the Union would ever be restored; would not live with the Yankees if it was, but would fight to the bitter end, and claiming that Lincoln killed all the Union sentiment in the South when he called on Virginia for troops to coerce a sister State; was sure they would gain their independence, for God was on their side; had changed their base of operations to improve their rations and transfer the beauties of war to our own soil…”

The soldiers expressed that they “would like to get hold of [Radical Republican Congressman] Thad. Stevens or [controversial Union Major General] Ben. Butler; would take no negroes alive in battle to be exchanged for white men; considered [recently vanquished Union Major General Robert H.] Milroy a first-rate Confederate quartermaster; professed to feel no apprehension about their precarious position with [Army of the Potomac commander Maj. Gen. Joseph] Hooker in the rear; trusted all that matter to Lee; was willing to go anywhere he ordered.”

The correspondent noted that the Confederates had marched in rather silently, giving an occasional cheer and cracking a few jokes at the townspeople’s expense, while the “citizens looked on with great interest.”

He added, “The officers and men were on perfect equality, seldom giving the military salute; and generally messing together. Some of the privates were pointed out as being very wealthy. A number of Baltimoreans were among the officers. There were also a few darkey servants who seemed to feel their importance and put on airs. One said he ‘didn’t like to come did side de ‘Tomac, ’cause he might got stole by some bobolishin [abolitionist].’

“Another inquired for the hostler at the hotel, and on being told that he had runaway from the Rebels, replied, ‘He needn’t be afeerd ob us, ’cause we don’t want no such free brack trash as dat down Souf.’ Another, during the march, rolled up the whites of his eyes to a crowd that was laughing at him, and said: ‘Can’t kill us now; got to kill all dees fuss,’ pointing at the Rebels.

“They requested some of the stores to be opened, and supplied themselves with clothing, and paid in Rebel scrip, the storekeepers charging in proportion. A guard was placed at the doors, and no one was allowed to pass out until his bill was settled.

“Around the county they applied to the country people for eatables, and were well supplied. Where they found a house deserted they would sometimes break in. They also seized a number of horses, but whenever the owner would apply to headquarters and identify their property it was returned. No crops or even a rail fence were destroyed, except in one case, where a road was made through a wheat field to water horses….”

To learn much more on the Civil War history of York, Pennsylvania, why not make plans this winter or spring to visit The Fiery Trial, the fascinating new Civil War exhibit at the York County Heritage Trust, 250 E. Market Street, York, Pa.   It’s only three blocks from Centre Square!   Visit their website for details!