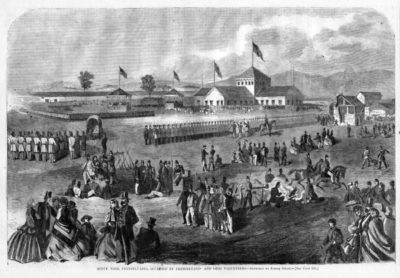 “A Perfect Storm of Flowers”

Recently, the various TV channels in the Susquehanna Valley have shown joyous scenes of local National Guard and Reserve units as they return home from their tours of duty in Operation Iraqi Freedom. Soldiers are greeted with cheers, flowers, food, and speeches praising them for their service. Not as often do we see the opposite scene, when the troops first leave for their military assignment, a time usually associated with sadness, some apprehension, but mingled with a strong sense of duty and patriotism.

In the early days of the Civil War, nearly everyone expected the war to be brief and not very bloody. President Lincoln’s call for volunteers had received a strong response, as tens of thousands of volunteers answered the summons to arms. In towns all across the North (as well as in the South), men and boys marched off to war unsuspecting that years of killing would follow, and a large percentage of those early volunteers would become casualties of disease, bullets, and accidents.

For the eager volunteers of one local regiment, their march through York town would be memorable, resulting in “a perfect storm of flowers.”

The 16th Pennsylvania Infantry was among those newly recruited regiments that were trained and housed at the old York Fairgrounds during the early days of the Civil War. It was a diverse regiment, comprised of five companies from Schuylkill County, four from York County (including a company raised in Hanover), and one from the town of Mechanicsburg in Cumberland County. They were organized at Camp Curtin in Harrisburg on May 3, 1861, for a term of three-months (all the time the War Department felt was needed to subdue the rebellion). The 16th was then transported to York’s Camp Scott for training and drilling, alongside several other new short-term regiments from Pennsylvania and Ohio. On June 1, the other troops left York for Harrisburg, but the 16th stayed at Camp Scott for a few more days, where it impressed onlookers with its proficiency at martial drills under Colonel Thomas A. Ziegle, a well respected military man with extensive previous combat service in the Mexican-American War.

On Saturday, June 8, it was the 16th’s turn to leave for Chambersburg. Ceremonies were held at Camp Scott in the early morning, and a group of York’s leading ladies presented the regiment with a hand-made silk flag. Following the celebration, the regiment marched proudly to the train station in downtown York. Crowds thronged the streets to cheer them on, and ladies gaily waved scarves and ribbons from sidewalks and balconies. One observer reported, “A perfect storm of flowers fell upon the soldiers as they marched through the streets, every one had a bouquet in his musket.”

The 16th Pennsylvania ended up in Hagerstown, Maryland, where two Hanover men eventually died from disease, including Captain H. G. Myers. Their term of service expired in July, and the York County boys returned home after mustering out in Harrisburg. They were greeted upon their July 27 arrival in York by the ringing of church bells, the firing of ceremonial cannon, and several speeches from local politicians praising them for their service (however uneventful it had been). Then, the nearly 400 York ex-soldiers sat down to a bountiful banquet prepared by the townspeople. Life as a soldier was a lark, at least at that stage of the war. Many men would re-enlist; several would pay the ultimate price, including Colonel Ziegle, who died at Warrenton, Virginia, in July 1862. He is buried in York’s Prospect Hill Cemetery.