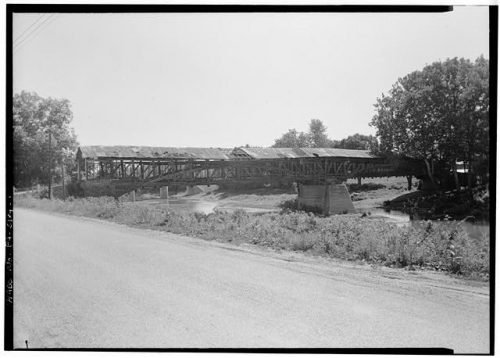 A murder in Warrington Township

As the Confederate Army of Northern Virginia invaded south-central Pennsylvania, their officers reported numerous accounts of bushwhacking. Armed civilians fired potshots at the passing columns of infantry and cavalry, or at individual stragglers who had dropped out or lagged behind the main bodies. Colonel Clement A. Evans of the 31st Georgia wrote to his wife that the bushwhackers had a useful side effect. The fear of them kept his men from straggling.

In a few cases, the snipers were successful. There are a few documented cases of Confederate fatalities caused by these ambushes. In some other instances, the killings were not planned out. They were reactionary, more of a provoked manslaughter charge in legal terms than a deliberate ambush planned in advance. For example, angry residents in McConnellsburg in Fulton County acting on the spur of the moment seized two Rebel stragglers and shot them in revenge for thefts in that region.

Here in York County, there are two known killings of Confederates – one of a Louisiana Tiger near Big Mount and the other of a black man associated with the Southern cavalry’s thievery of horses. Angry residents gunned him down in southern Warrington Township near Detter’s Mill. 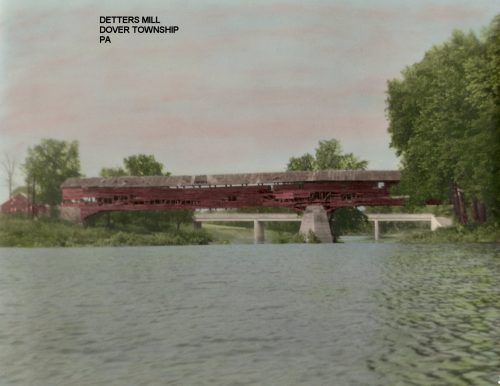 This old covered bridge was a main landmark in the Big Conewago / Bermudian Creek area and was not far from the location of the Warrington murder. From the Fred Yenerall collection.

York County author Dennis W. Brandt researched the murder of the black man for his fine book From Home Guard to Hometown Heroes: the 87th Pennsylvania (a must for your York County-related Civil War library). He studied old newspaper accounts, as well as court records and typescript interviews with participants to piece together the details of this long ago incident during the Gettysburg Campaign.

Here is a synopsis of the key events based upon Dennis’s account.

In the early summer of 1863, Confederate cavalrymen raided south-central Pennsylvania operating in advance of lengthy columns of infantry who were marching toward Harrisburg and York. These advance raiders began seizing horses, provisions, food and supplies in northwestern York County on June 27 (see my recent series of nine posts on the Jenkins Raid). Scores of residents of Carroll, Warrington, Washington, and Franklin townships were victims of these patrols and more than 100 horses had been taken.

When General Jenkins’ roughly 250 men departed on June 29 into Cumberland County to rejoin their brigade, York Countians breathed a sigh of relief, expecting that the worst had passed.

On July 1, more than 5,000 Confederate cavalrymen passed through the same region when Major General J.E.B. Stuart‘s veteran division rode from Dover toward Carlisle via Dillsburg. nearly 600 more horses were taken from northwestern York County. Warrington Township was hit particularly hard, with nearly a quarter of the farms along the main roads known to have been raided. Residents were angry at this interruption of their lives and the blatant theft of their horses and mules just as the summer harvest neared. Tempers were short, and some residents were looking for revenge.

Dennis’s research (and that of Jim McClure for his interesting book East of Gettysburg) indicate that at least one Rebel raiding party, likely Jenkins’ party on June 27-29, was accompanied by a black man, either a slave or a servant who may have accompanied the troops on the expedition to Pennsylvania. The black man was adept at ferreting out the secret places where York Countians had hidden their horses. Ravines, hollows, woodlots, mountains. It made no difference, as this man became widely known in a short period for his skill in horse thievery. He also had a sharp sarcastic tongue, as he often insulted his victims as he rode away with their horses.

Perhaps he had wandered away from the column when it departed, or for some reason had stayed behind in York County. Author and newspaperman Jim McClure writes that someone had seen the black man with the Rebel raiders atop a horse belonging to George Emig. One of the Confederates inquired, “Well Jim, did you get that horse?” “Yes,” came the reply from the man, “and he’s a good one too.” [George B. Emig filed a post-war damage claim that the Rebels took two horses from him on June 29, a 6-yr-old bay and a 4-yr-old black mare.]

A civilian happened to overhear the conversation. A couple of days later, he spotted “Jim” still in Warrington Township and advised him to leave.

His ill-advised decision would cost him his life. 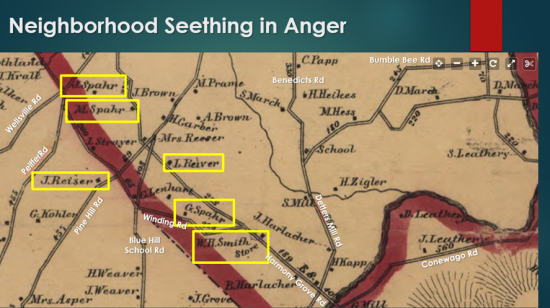 In early July, reports circulated that the black man was still in the area, so on July 3, a group of six armed Warrington Township residents went looking for him. The group included Jeremiah Miley Spahr, a soldier from Company H of the 87th Pennsylvania who had walked back to his home following the stunning Union defeat at the Second Battle of Winchester three weeks ago. Also in the group was their neighbor, merchant William R. Smith, whose country general store had been cleaned out by the Rebels on June 29.

Two others were Spahr’s brothers, Lewis and Henry. Jeremiah Spahr carried his military-issue rifle; the others likely had firearms as well. My research had revealed that eight different members of the Spahr family lost horses to the Rebels over a five-day period, so the family likely was brimming with hostility and angst over the thievery. They had lost a collective total of thirteen horses, crippling the family’s ability to bring in their crops. The final two men in the lynch mob were Levi Reiver and Lewis Reeser, neither of whom filed post-war claims for losses incurred to the Rebels, but they may have also have been victims of the horse thief. The 39-year-old Reiver had been a cabinet maker in Washington Township before the war but during war years owned a 135-acre farm on Harmony Grove Road in Warrington Township.

The six Warrington men were angry and bitter, and their judgment was clouded by the memories of the perceived atrocities committed by the soldiers and their black guide. They located their prey in a quarry near the confluence of Big Conewago and Bermudian creeks on southern Warrington Township. After some verbal sparring, Jeremiah Spahr leveled his Springfield Rifle and murdered the horse thief with at least three shots. Race may have played a role, but as Dennis Brandt points out, any errant Rebel thief, white or black, was likely to have been killed by the angry mob.

The group of killers hid the body under some brush alongside the road. They went home and resumed their lives. However, at the subsequent coroner’s inquest, two prominent Wellsville men, John E. Wells and David Cadwalader, pushed for the six to be arrested. It took several weeks for a grand jury to be convened in York under Judge Robert Fisher, but lacking sufficient evidence, the charges were dismissed.

The three Spahrs, Smith, Reiver, and Reeser were free men.

I am not aware of the location of the murder victim’s grave. If anyone knows where it is, please let me know so I may post a photograph in a future blog entry.