A Civil War murder mystery in the Mount Wolf area 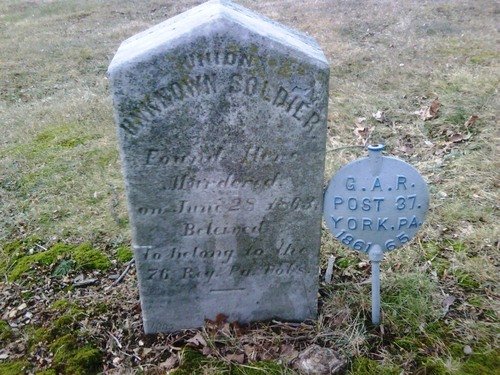 In past blog entries, I have briefly presented a couple of mysterious Civil War murders here in York County, Pennsylvania, including that of Charles Brown, a young Confederate soldier of the Louisiana Tigers who was gunned down near Big Mount while raiding a farm in that vicinity, as well as the story of a Confederate-aligned black man named “Jim” who was murdered by six Warrington Township men in retaliation for his role in the blatant horse thievery when the Rebels rode through the region.

Back in 2007, fellow blogger Jim McClure posted an entry regarding a third unsolved murder mystery in York, one that has the least documentation of the trio. I was wandering around Prospect Hill Cemetery in York earlier this week on lunch break and for the first time found the gravestone of the unknown soldier mentioned by Jim.

Emig’s Grove Campground was a serene setting near Manchester (the village was known as Liverpool Post Office during the Civil War), Pennsylvania, used in the 1880s as a Church of the Brethren meeting site for annual revivals, tent meetings, and summer “holiness camps” until August 1896 when a fire destroyed several key buildings. To replace it, a larger and more modern camp, Penn Grove Campground, was constructed near Smith’s Station in southern York County. Emig’s Grove Campmeeting had been built in 1880, but the worshippers inherited a mystery — a grave of an unknown soldier dating back from the Civil War.

19th-century historian and former soldier John Gibson recounted what few details are known in his History of York County:
“June 21, 1880, a charter of incorporation was granted to the Emig’s Grove Campmeeting Association, the object of which was ‘to maintain the worship of God in gatherings or assemblies for religious purposes, according to the discipline and belief of the Church of the United Brethren in Christ, and other Evangelical Churches.’ Fourteen acres of land were purchased of the late John Emig. Thirteen acres have since been added. The location is one mile south of Mount Wolf Station on the line of the Northern Central Railway. The association organized with Rev. C. T. Stearn, president…

Excellent board tents have been built, and a large number of people meet annually, during the month of August, for the purpose of worshipping the God of their fathers in the serene atmosphere of this beautiful grove – one of ‘God’s first temples.’

In one corner of the grounds, in a secluded spot, is a mysterious tomb of a soldier of the civil war. It has been sympathetically remembered by some patriotic members of the Camp Meeting Association, and marked by a neat and appropriate headstone. His remains were found and interred near the spot, about the time that the Confederate Gen. [Jubal A.] Early took possession of York, but “of his name and his fame no one can tell.” He was clad in the uniform of a Union soldier, the buttons of which contained the coat of arms of Pennsylvania, and his cap the number 65.”

After the abandonment of the Emig’s Grove Campground, it is likely the lonely Civil War grave was neglected until the turn of the century. In her interesting booklet “A Walking Tour of Civil War-Era Residents at Prospect Hill Cemetery,” YCHT librarian and researcher Lila Fourhman-Shaull mentions what happened next.

She quotes the York Gazette from May 13, 1902: “The remains of the unknown soldier that had been interred years ago at the old Emig’s Grove Campgrounds was disinterred yesterday by Undertaker W. L. Denues and interred at Prospect Hill Cemetery”. 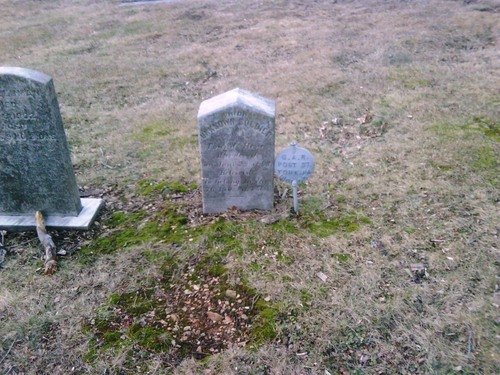 Jim McClure adds another tidbit from one of his readers who cited a Gazette article from May 11, 1906, stating, “William A. Cook will personally see to it that the grave of the unknown soldier … is attended to and properly decorated. This soldier’s body for many years reposed in the woods near the campground and three or four years ago it was removed to Prospect Hill Cemetery, through the instrumentality of Samuel C. Ilgenfritz, now deceased, who was then one of the most active members of the Sedgwick post.”

So, who was this unfortunate victim, and how and why did he end up in a secluded grave off the beaten path south of Mt. Wolf?

Perhaps a clue can be found in the writings of Confederate colonel Richard L. T. Beale of the 9th Virginia Cavalry: “We again marched all night, halting once for an hour or more at Dover, to catch a little rest, and to parole our prisoners, now numbering about six hundred. The march continued the following day, and a good many prisoners were taken, being chiefly men going to rejoin their regiments.”

It is known that hundreds of Rebel soldiers were camped between Emigsville and York on various farms (more on those exact locations in an upcoming post). They belonged to William “Extra Billy” Smith‘s veteran brigade of Virginia infantry, the troops once personally commanded by the aforementioned Jubal Early. They arrived on Sunday, June 28, the same day the headstone indicates that our victim was killed. Could some of Early’s boys on that long ago Sabbath have encountered a lone Yankee soldier who was trying to evade them and either return to his home, or head back to his regiment down south after a furlough? Did the Southerners blatantly murder him and secretly bury the telltale body “in a secluded corner”?

The man’s headstone mentions the 76th Pennsylvania Infantry, a regiment with close ties to York County. A search of their roster in Samuel Bates’ classic History of Pennsylvania Volunteers does not indicate that any men were missing or presumed killed in the time frame of our victim.

The insignia on the cap was the number 65. The 65th Pennsylvania was also known as the 5th Pennsylvania Cavalry. The first ten companies had been recruited from the city of Philadelphia, the last two from Pittsburgh, so if the man was from that regiment, he was not likely a York Countian. Perhaps he was a wayward courier? Or, more likely, a wounded soldier from the U.S. Army Hospital in York, assuming he was a cavalryman. Again, no one is known to have been killed or come up missing in York, however.

So, the mystery continues. Back in 2007 Jim McClure asked if anyone had more information on the topic, and none has been forthcoming. I will keep digging, but will repeat his request that if anyone has pertinent information or documentation, please pass it along.