Major General J.E.B. Stuart led more than 4,500 veteran Confederate cavalrymen through western York County on June 30, 1863, following the Battle of Hanover. His men paused for the night in fields surrounding Dover, Pennsylvania, before heading northward on July 1 to Dillsburg and Carlisle.

As the head of the Historical Society of York County, Robert C. Bair, spoke about the Civil War events, Miss Mary Lanius unveiled the plaque in front of a crowd estimated to be more than 4,000 people.

Here is part 2 of this series, with the first section of Mr. Bair’s lengthy, but at times very interesting, oration. In his opening remarks, Bair addressed the controversy that the tablet improperly honored the breakaway Confederacy, whose armed representatives had stolen horses and mules, as well as provisions and, at times, personal property. Rather than selectively bury or ignore uncomfortable or controversial parts of our history, Bair wonderfully captured many of the still relevant reasons why we all, more than 100 years after his stirring narration, should still strive to preserve and interpret the rich history of York County, and our state and nation.

It is a task not to be taken lightly.

“The permanent identification of places and the perpetuation of notable events has been a distinguished habit of all peoples from earliest times. The event that we here record is of itself significant, yet larger things are suggested by it. The splendid audience present at this dedication represents on the part of the people of this community an intelligent interest in their own local history. It demonstrates an eager willingness to permanently preserve an important fact pertaining to the place of their own habitation; not for themselves alone, but for the edification of those who shall come before them. It shows a determined practical purpose to exactly mark the ground where once transpired a remarkable event — one never to be duplicated here — in order that those who had no part in it and who, seeking diligently hereafter, may find in an expected place material which shall increase their knowledge of the past.

Nation Proud of Its History

“Our dedication also reveals, on the part of this generation, an intelligent and proper pride in the struggling times of the forefathers. Manifestly, patriotism is deep in the individual citizen, prompting him to devote his time and money, when he sets up a memorial which enlarges and embellishes the history of his county, state or town.

“This same motive has fine expression in another form, when men and women unselfishly confide their precious heirlooms to the safe keeping of public institutions. historical societies and kindred repositories, where inspection of them may afford pleasure and instruction to all the people. Potential forces in and behind these acts are the patriotic organizations of our town. The Daughters of the American Revolution, the veterans of our wars and their sons and daughters. These imbue the spirit of loyalty and contribute to our national life that indefinable sentiment and enthusiasm which constantly expresses honor for the past, brave hope for the future and in our present strives to prepare enjoyment for everybody.

“Some may thoughtlessly object that the particular act we perform today, in the erection of this tablet, perpetuates the name and fame of the Confederacy; that it is unseemly to do this thing. Let us inquire and clearly understand this matter.

“It is unwise to make history plain. Is it unseemly that men should engrave rocks and boulders or set up metal and bronze to designate the spot where once an Indian massacre cut off the settler ancestor or despoiled the pioneer villaged valleys? As of the Merrimac, the Connecticut, the Hudson, the Wyoming, the Muskingum, old Fort Dearborn, Chicago and countless others. Was it to perpetuate alone inhuman Indian butchery that among the Montana wilds — ‘twixt the Big Horn and Little Big Horn rivers — an imperishable granite block today shows the inquisitive and attentive visitor the spot where General George A. Custer and his entire military command were utterly destroyed by the Ogalalla and other Sioux. Do the tall shafts that tower on Bunker Hill, at Brandywine or Fort Washington honor alone the success of British arms on American soil?

“No, no, my friends, the work you do here today is not unseemly; it is perfectly natural and praiseworthy that you should do it. You honor yourselves. Indeed, you cut here your niche in the rock of time and he who shall pass this way will yet inquire (as those at Gilgal long ago [an Old Testament story]) ‘What mean these stones?’ and for answer he shall find the inscription you have written, and sure it is he will read into it, because of your forethought on his behalf, even more than you understand now or intend by it. 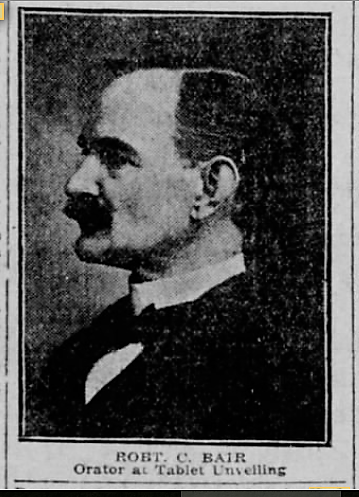 “Recognizing the fact that the people of Dover are among the very first in York county to render a meritorious service of this kind, the president of the Historical Society of York County takes this occasion to say that the society regards with high favor the conspicuous enterprise and forwardness of the citizens of Dover and the successful efforts of Captain Wilbur C. Kraber to entablet not only this but other historic places and events in our county, and I assure you that the approval, appreciation and commendation of the society is extended to them and to all of you who shall manifest a like public spirit.”

At that moment, Miss Lanius unveiled the tablet to the applause of the onlookers. Bair then turned his comments to the specific history behind the Confederate invasion of York County.

His often interesting remarks will be in future installments in this series of Cannonball blog posts.