It was late November 1907, the Saturday before Thanksgiving. All morning, crowds jammed the main roads leading into the small village of Dover, Pennsylvania. They came on foot, by horse, carriage, and other conveyances.

They were assembling to listen to patriotic music and stirring historical narratives, and to watch the unveiling of a tablet commemorating the July 1, 1863, visit by Confederate Major General J.E.B. Stuart and three brigades of cavalry to Dover. Stuart had ridden north from Hanover the previous afternoon and evening following the Battle of Hanover in an effort to locate Major General Jubal Early’s infantry division, which reportedly was operating near York. His 4,500 troopers had camped in the fields surrounding Dover, paroled more than 200 Union prisoners, collected horses and supplies, and then rode off toward Dillsburg and Carlisle.

Now, 44 years later, a throng of citizens of nearly the same number as Stuart’s forces gathered at Dover to recall the long ago events of the Civil War. Many were aged eyewitnesses to those terrifying days; others were second or third generation descendants interested in learning more about Dover’s history (or perhaps, there simply to be part of the day’s big events).

A reporter for the York Daily covered the parade and tablet unveiling ceremony and recorded his impressions in the November 25, 1907, newspaper. Here is his account.

“The memorial tablet erected at Dover to commemorate the paroling of 200 Union soldiers by General Early [sic; General Stuart], during Lee’s invasion, was unveiled Saturday afternoon before an enthusiastic gathering which numbered more than 4,000 persons with the City Band playing the ‘Star Spangled Banner,’ and the assemblage worked up to a state of patriotic fervor, Miss Mary S. Lanius pulled the cord which loosened the American flag that veiled the tablet. A great cheer arose from the crowd.

“Following the unveiling, a salute of four volleys was fired by Company A, Eighth regiment, and of three volleys to the York Cadets. Also two salutes from the large 1,000 pound cannon which was taken to Dover by the cadets. This cannon was fired by Captain George C. Worley, burgess of West York borough, and a member of the General John Sedgwick Post 37, G. A. R. [Grand Army of the Republic, a post-war Union veterans organization]. He was assisted by members of this post, who entered into the work of firing of the salute with the spirit of 40 years ago. The concussion of the first shot shattered 15 panes of glass in the village. 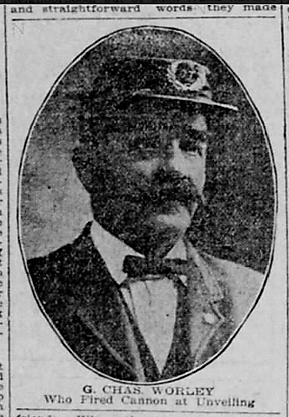 “The ceremony of the unveiling was performed by Miss Lanius during the speech of Robert C. Blair, president of the York County Historical society. It occurred when Mr. Blair reached that part of his address which pointed out the significance and meaning of the tablet.

“The unveiling was preceded by a military and civic parade, participated in by over 900 persons.

“The procession moved over the main street and two of the side streets of the borough. At the conclusion of the parade the marchers formed a circle in the borough square, and the ceremonies attending the unveiling began.

“R. H. Bowersox was master of ceremonies and introduced the speakers. The oration of the Rev. A. R. Steck, D. D. was not made. Owing to a delay in the starting of the parade, it was a late hour when the part of the program which he was on was reached. On account of the women present, who had been chilled by being exposed for two hours in the open air, he declined to detain the crowd any longer, though strongly urged to do so by all present. A resolution was passed urging the committee to see that his speech be printed in the papers, with the account of the unveiling.

“Robert C. Blair in his address gave an interesting and instructive historical account of the event commemorated by the tablet, congratulating Dover and Captain W. C. Kraber on the successful culmination of their efforts to entablet this historic place and event. A direct result of Saturday’s demonstration, it is hoped by those interested, will be the organization of the National Military Memorial association. That accomplished, the proposed tablet to be placed on the Colonial hotel will be made the occasion next Memorial day of a demonstration that will be national in its scope.”

Wilbur C. Kraber’s broad vision for the proposed National Military Memorial Association was picked up by some Pennsylvania papers but failed to gain traction in its aim to systematize the erection of tablets marking important military engagements and historical places. He had next planned to erect a marker at Columbia to commemorate the June 28, 1863, burning of the Columbia-Wrightsville bridge during  the Gettysburg Campaign. 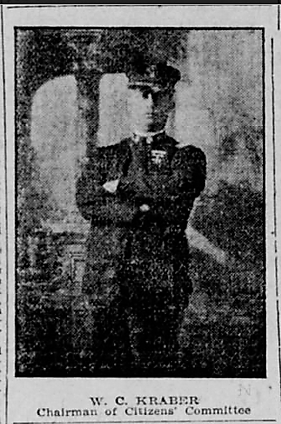 Kraber was unusual for the times, having been married and divorced four times. He was also later sued by his successor at the York Cadets for allegedly stealing bunting from the cadets’ hall in York. At Wilbur’s death in July 1932, his brother Luther accused a prominent York Democratic politician, Samuel M. Shue [a close friend of the deceased], and Kraber’s housekeeper, Mrs. Harriet Berriman, of poisoning him to death. They, in turn, sued Luther on the day of Wilbur’s funeral for $50,000 for slander.

In the next Cannonball post, we will look at the Dover tablet dedication speech by Robert C. Blair.