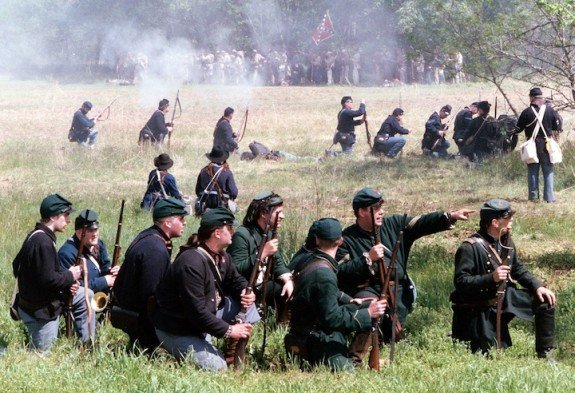 This event is the largest Civil War re-enactment on the East Coast outside of Gettysburg. The theme for this year’s re-enactment is “1865 Actions Around Petersburg—White Oak Road & Five Forks”.  Over 1,000 reenactors will converge on the park for this event featuring:

The Petersburg, Virginia campaign is a series of military actions that took place between June 15, 1864 to April 2, 1865 and lead to Lee’s surrender at Appomattox Court House. The Battle of White Oak Road took place on March 31, 1865. Union forces lead by Major General Gouvernor K. Warren set out to trap the Confederate Army and force its surrender. After a day of fighting, Union forces crossed White Oak Road trapped Confederate forces and broke the connection between Confederate Generals Pickett and Lee. The Battle of Five Forks took place on April 1, 1865. While communication within both forces was difficult, Union troops were well placed to trap the Confederate Army and force its destruction.  Late in the afternoon, Union forces overwhelmed the weaken Confederates and cut off their northward retreat.*

While admission is free, a voluntary collection will be taken each day of the re-enactment and all proceeds will go toward Civil War preservation efforts. The Neshaminy Civil War Re-enactment has raised over $50,000 during its 26-year history for various Civil War organizations.