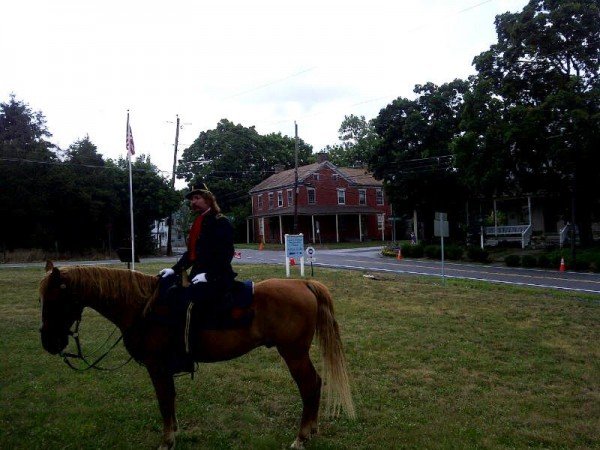 Steve Alexander, portraying Brig. Gen. George Armstrong Custer, sits on his horse in the old town square of Hunterstown, Pennsylvania. Back on July 2, 1863, Custer’s Michigan cavalry fought Wade Hampton’s Confederates in the Battle of Hunterstown concurrent with the second day of the Battle of Gettysburg. Some modern historians and park rangers have dubbed this now rather obscure, but then strategically important action as “North Cavalry Field.”

For the past eight years, Roger and Laurie Harding and the Hunterstown Historical Society have hosted a Civil War event at the Harding’s home, the historic Tate farm. Through the Hardings’ efforts, and a bevy of volunteers, a monument to Custer and the battle has been erected, dedicated, and maintained on the old farm. Each year the event includes a battle walk, authors and artists, living historians such as Alexander and others, and many other events, including a silent auction to raise money for preservation.

Here are some photos from the 2012 event… 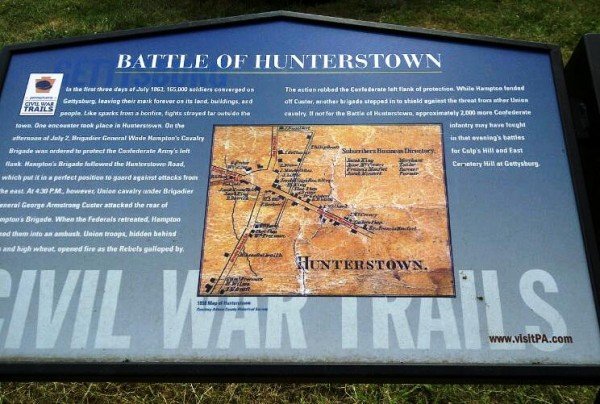 This wayside marker along Shrivers Corner Road on the Tate farm recalls the Battle of Hunterstown and shows how the village was an important crossroads with strategic importance to both armies’ supply lines and logistics, as well as access to the opponent’s flank. 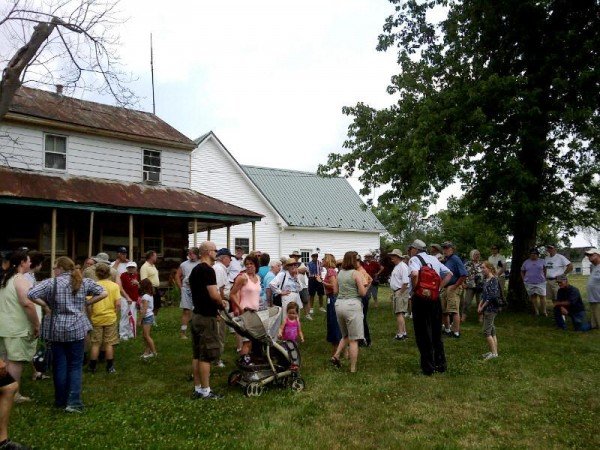 A large crowd gathered for the event. Here Gettysburg Licensed Battlefield Guide Mike Vallone introduces the Battle of Hunterstown to the attendees. The oppressive heat and humidity would cause Mike to shorten his planned battlewalk, but he was able to give everyone a good understanding of the strategy and tactics of the late afternoon battle. 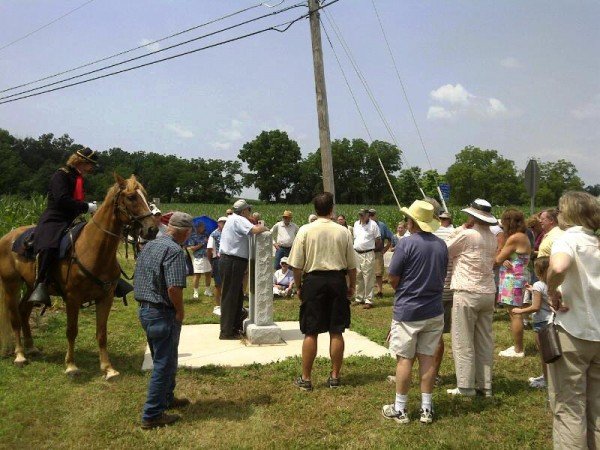 Vallone and Alexander give a good background biography of General Custer. Mike is leaning on the Custer monument installed just a few years ago on the Tate farm. 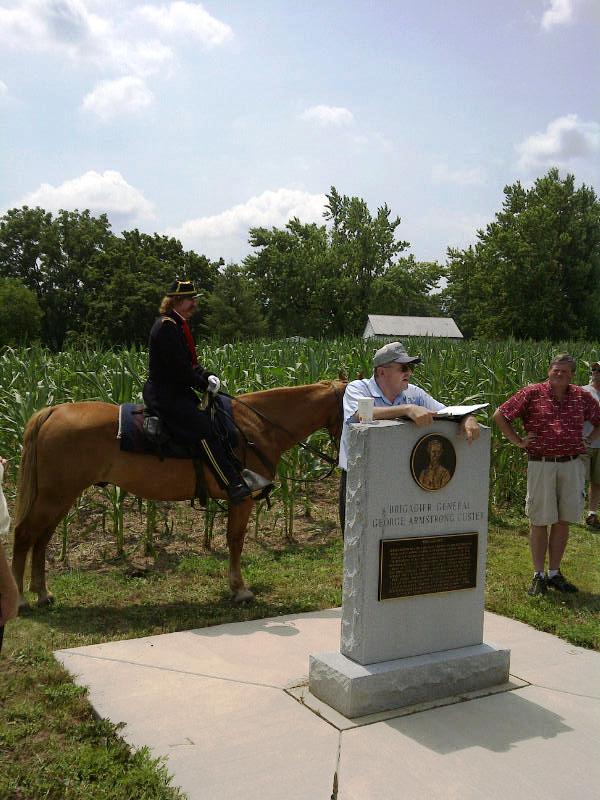 Another view of Steve Alexander and Mike Vallone as they present to the crowd at the 2012 Hunterstown battlewalk. 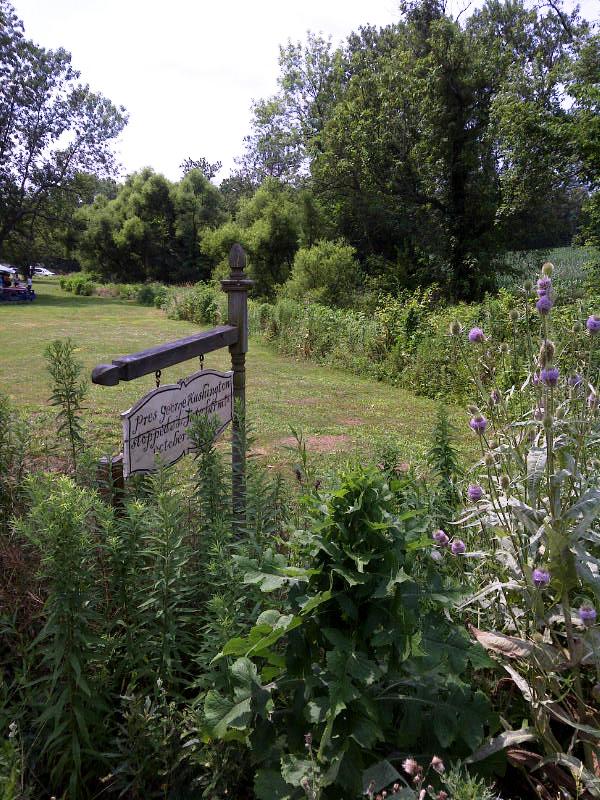 The historic Tate farm not only played a role in the 1863 Civil War battle, but George Washington and Lighthorse Harry Lee paused here in colonial days while a local blacksmith replaced a horseshoe. 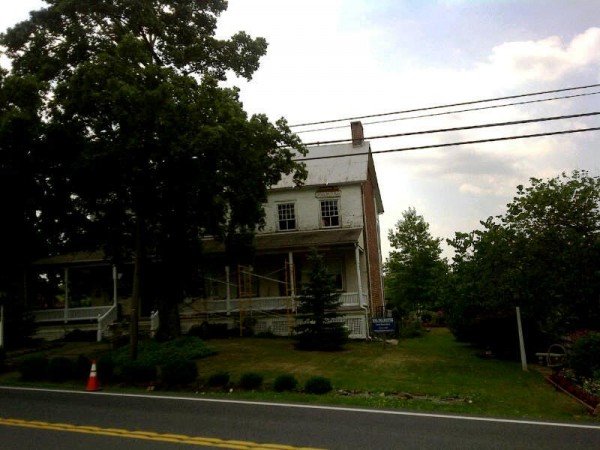 The old Jacob Grass Hotel is undergoing restoration work. This served as a hospital during and after the Battle of Hunterstown. A blue wayside marker recalls the building’s use as a Civil War hospital. 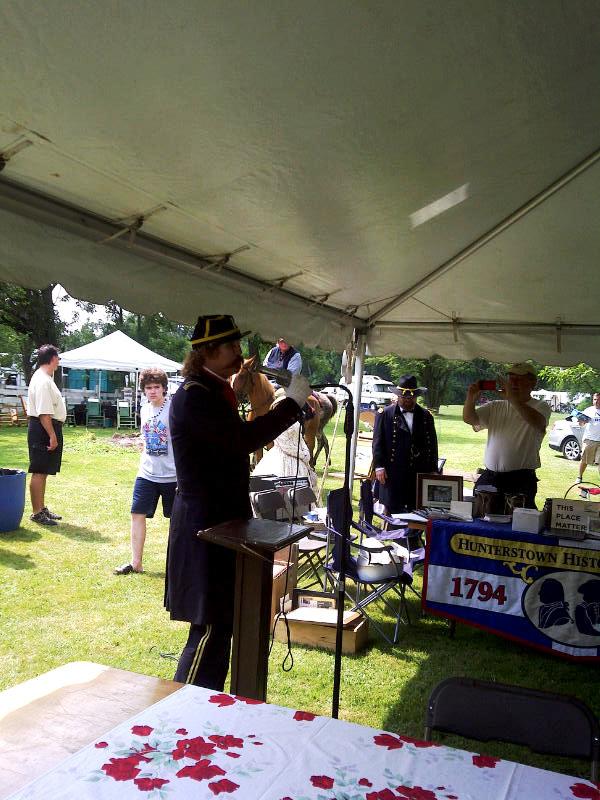 Living historian Steve Alexander speaks to the assembled throng, more than 100 strong, under the tent on the Tate farm. Among the items up for silent auction this year was a hand-made copy of Custer’s personal battle flag, a red and blue guidon. Made by local seamstress Betty Cook, it sold for $100. 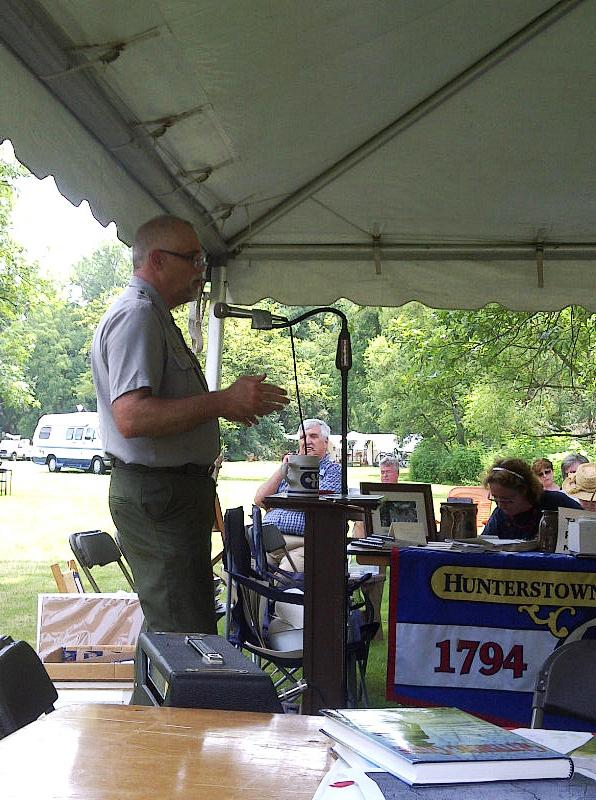 The keystone speaker after the battlewalk, a catered BBQ lunch, and the silent auction was veteran LBG Troy Harman, who explained the importance of holding the roads, railroads, and waterways during a Civil War engagement. Hunterstown held strategic importance to this end.

Next year’s Hunterstown commemoration will be held on July 2, 2013, the 150th anniversary of the battle.