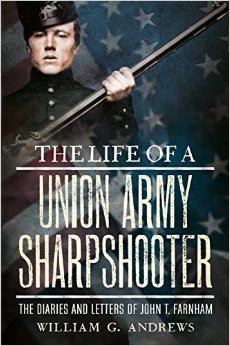 John Tyler Farnham would have been just another long-forgotten Civil War soldier except for the dogged efforts of author William G. Andrews to locate, transcribe, and annotate Farnham’s extensive six-volume diaries from his entire three years in the Union army, as well as to track down his other writings. Farnham, a native of Cayuga County, New York, enlisted in Rochester in late August 1862 and served in the 1st New York Sharpshooters. The command served in various corps and armies, including a stint in the First Corps of the Army of the Potomac.

Farnham detailed his service in his diaries and an extensive series of letters, which also have been preserved. His writing is vivid and interesting, and his accounts are a gold mine of information for anyone interested not only in the activities of a Union sharpshooter, but also to those readers who enjoy first-person accounts of battle action, campaigns, camp life, the home front, and human emotions and psychology.

Farnham’s gradual transformation from a naive, but eager young recruit fresh from his mundane job in the newspaper industry to a veteran United States soldier is evident in the pages of Andrews’ fine book. He saw far more time in the military hospitals than on the battlefield, and, for a sharpshooter, apparently was not very proficient at the trade. He mentions that the few times he shot at Rebels, he missed, as he usually did when target practicing.

Still, while devoid of extensive battle descriptions, Farnham’s daily diary entries and his letters to his hometown newspaper offer a compelling glimpse into his life, his thoughts, his frustrations and fears, as well as his joys.

The 1st New York Sharpshooters were initially attached to the 108th New York Infantry. Farnham spent more than 100 days during his three years as a soldier ill or in the hospital. Though frail and sickly for much of his service, he nevertheless stayed in the service as a clerk at the headquarters of the Iron Brigade, as well as in the War Department in Washington for a time.  Perhaps his most interesting anecdote is about meeting Abraham Lincoln and then, later, after Lincoln’s assassination, he acquired a blood-stained cuff from the clothes Lincoln wore that fateful Good Friday at Ford’s Theater.

Farnham, who would die only four short years after the Civil War of tuberculosis, was intelligent, well educated, and took a special interest in cultural affairs. He writes frequently of attending musical concerts, plays, and other events, as well as items that struck in fancy from various newspapers he voraciously read. He also enjoyed sightseeing when he  had the opportunity and often talks about famous or interesting buildings and places he has visited that day.

William Andrews, a retired college professor, is to be commended for painstakingly researching and editing Farnham’s writings, and then preparing them for publication. The result is a very interesting journey through the war years from the eyes, heart, and pen of a unique Civil War soldier whose story needed to be told. Well done, Mr. Andrews, and huzzah to the memory of John T. Farnham.

William G. Andrews, The Life of a Union Army Sharpshooter: The Diaries and Letters of John T. Farnham (Fronthill Media, 2016), 228 pages, hardback with dust jacket, several pages of pertinent photographs and illustrations (many used for the first time in this work), endnotes, no index. ISBN 978-1-62545-077-7.

From the publisher… John T. Farnham, a sharpshooter in the Union Army, wrote a substantial diary entry nearly every day during his three-year enlistment, sent over fifty long articles to his hometown newspaper, and mailed some 600 letters home. He described training, battles, skirmishes, encampments, furloughs, marches, hospital life, and clerkships at the Iron Brigade headquarters and the War Department. He met Lincoln and acquired a blood-stained cuff taken from his assassinated body. He befriended freed slaves, teaching them to read and write and built them a school. He campaigned for Lincoln’s re-election. He subscribed to three newspapers, several magazines and devoured twenty-two books. He attended twenty-three plays and six concerts during his service. He was gregarious and popular, naming in his diaries 108 friends in the service and 156 at home. Frail and sickly, he died of tuberculosis four years after his discharge. He paints a detailed portrait of the lives of ordinary soldiers in the Union Army, their food, living conditions, relations among officers and men, ordeals, triumphs, and tragedies.