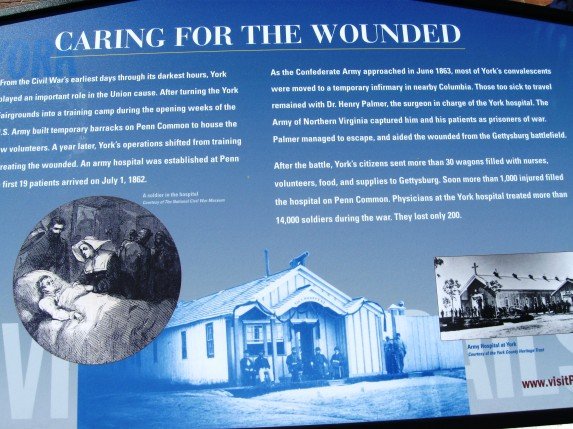 During the Civil War, York, Pennsylvania, boasted a 2,000-bed U.S. Army Hospital with one of the lowest mortality rates of any military medical facility in the country. Less than 200 patients out of 14,000 during course of the war died while recuperating in York, a remarkable statistic. Credit should go to Chief Surgeon Dr. Henry Palmer and his talented assistant Dr. Alexander R. Blair.

The December 21, 1912, issue of the Reading (Pa.) Eagle neatly covered the brief history of the York U.S. Army Hospital, including commenting on several North Carolina soldiers who had camped there during Jubal Early’s June 1863 occupation of York prior to the battle of Gettysburg; 40 of which were later brought back to York after being shot at Gettysburg. Dr. Palmer, upset at his treatment while briefly a prisoner of war, refused to tend to them and they wound  up as patients of York’s civilian doctors in a makeshift hospital in the Odd Fellows Hall on S. George Street. 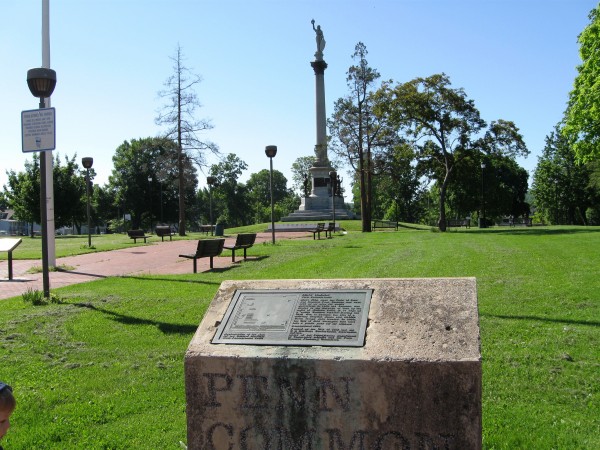 Nursed Wounded from Antietam, Gettysburg, the Wilderness and Other Battlefields During Civil War.

York: The United States hospital at York was in full operation in the fall of 1862. After the terrible battle of Antietam, fought in September of that year, between 70,000 soldiers under Lee and 75,000 soldiers under McClellan, caused a heavy loss of life and resulted in wounding many soldiers, hundreds of unfortunate men were brought to York for treatment, writes George R. Prowell, York’s historian.

After the battle of Gettysburg, fought on July 1, 2, 3, 1863, train after train, in all about 2,100 wounded soldiers from Gettysburg were brought here. They represented more than a dozen states in the Union. Many of them through the skill of the York Hospital surgeons were saved from the amputation of wounded legs or arms. A few of them died and the remainder left York, and after recovery, joined their regiments safe and sound except for the scars resulting from their wounds.

Meantime the wounded soldiers who had been sent to Columbia during the invasion were brought back to York. Some of the wounded, who had left here in the spring for other hospitals, also returned, and they were delighted with the familiar scenes of the former surroundings and commended the treatment received from the surgeons and nurses who had spared no efforts to make them comfortable.

Many Confederates Cared For.

Among the wounded brought here from Gettysburg were nearly 40 soldiers from the 27th North Carolina, a confederate regiment which had entered York with General [Jubal A.] Early, on June 28.

The ancestors of some of these men had emigrated from Pennsylvania to North Carolina nearly a century before. When this fact was discovered the people of York gave them as careful attention as our own soldiers. The North Carolinians were quartered for more than a month in Odd Fellows’ Hall on South George Street, until they were sent to their home. 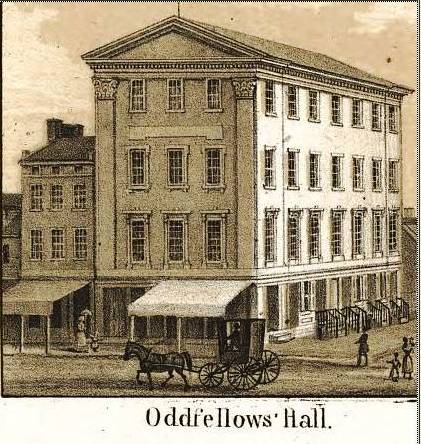 The greatest care was taken of the wounded men brought here from Antietam. Many remained at York for several months, while others, who received only slight wounds, soon returned to their regiments. 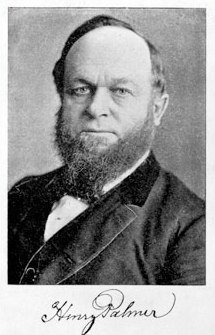 Surgeon-in-Chief Palmer, aided by his assistants, spared no effort to make the hospital a pleasant home for the wounded boys in blue. Plenty of wholesome food was furnished them and amusement provided to while away the winter evenings. Lectures and musical entertainments were frequently given to cheer up the inmates of the hospital. A library and reading room was established. In the spring a number of wounded soldiers at York were able to join their regiments and take part in the eventful campaign of 1863.

In June of that year rumors came to this hospital that Confederate scouts had appeared near Hagerstown, Md. The battle of Chancellorsville had been fought in May, and Hooker’s army was defeated by the veterans of the South under Lee. The impending invasion of Pennsylvania by a large army of Southern troops made York an undesirable place for the sick and wounded men. About 180 who had nearly recovered from their wounds were organized into companies and marched to Wrightsville in order to aid in protecting the bridge across the Susquehanna at that town. Those who were unable to join companies were removed with the medical stores and commissary supplies to Columbia, in charge of Dr. A. R. Blair. They reached that borough at midnight, being taken down the turnpike in ambulance wagons and at Columbia met with a hospitable reception. The patriotic women of that town furnished food and bedding for immediate use. Odd Fellows’ Hall was opened for the wounded soldiers, until quarters could be fitted up in a new public school building. The wounded remained at these quarters for several weeks. 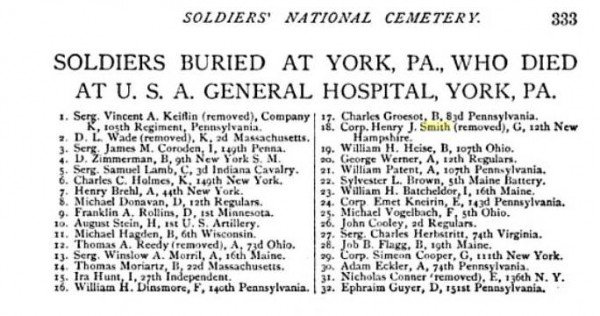 In March, 1864, the first number of the “Cartridge Box,” edited by George W. McElroy and A. R. Blair, and issued by the soldiers, appeared from the press. It was a spicy little sheet, brimming over with fun and patriotism. It was published weekly, and was continued until the close of the hospital. A file of this paper is owned by the York County Historical Society.

In the month of April, 1864, many vacant places were caused by the boys, who returned to their regiments. Those who were still unfit for duty took great delight in improving the external appearance of their temporary home, and showed much pride in keeping the ground neat.

In May, 1864, preparations were ordered for the reception of 1,500 patients. One hundred additional tents were put up. At that time there were 2,500 patients, with 21 surgeons. The ward committees redoubled their exertions in behalf of the suffering men. The liberal citizens were always equal to the emergency. The farmers in the vicinity of York and the neighboring towns of Lancaster and Columbia sent timely contributions of clothing, bedding, old linen, bandages, butter, eggs, in fact everything needed by the patients requiring special diet.

The battle of the Wilderness, in Virginia, in 1864, furnished many recruits to the invalid ranks at York. They reached here in a sad condition. The high situation and the pure atmosphere of the hospital on Penn Park had a salutary influence upon the health and spirits of the wounded. In June 1,000 additional patients arrived from the battlefield of Cold Harbor, in Virginia.

Under the excellent management of the officer in charge the condition at the hospital had continually improved. The mess table seated 800, and was filled three times at each meal. A track was laid through the center of the table with miniature cars to convey the food: this model invention was much admired bu the visitors. But few deaths occurred during the summer.

In September, 1864, Surgeon Palmer was granted a furlough of 60 days to recruit his health. Upon leaving the hospital he addressed a courteous letter, containing words of the highest recommendation regarding the successful work of the surgeons and nurses of the United States Army hospital. He was succeeded by Dr. St. John Mintzer. 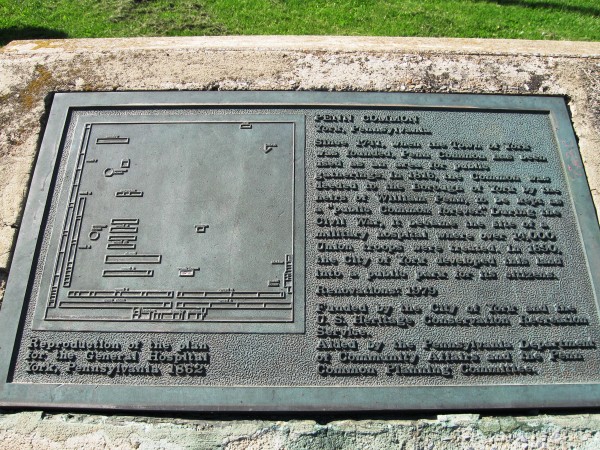 A Miniature World in Itself.

The hospital was a miniature world in itself with post office, printing office, cabinet, carpenter, paint and tin shops. All the work of the various departments was done and the ground kept in order by the convalescent soldiers, without one dollar additional expense to the government, and not a man was employed, who was fit for field duty. In the spring of 1865, the number of patients was greatly reduced, the term of enlistment of many of the men expired, and they gladly exchanged the blue uniforms for the citizen’s dress.

The fall of Richmond, and the surrender of the Confederate commanders ended the war, and the mission of the York military hospital was fulfilled. One of the last soldiers to be treated at this hospital was Henry Gable, now residing on South Beaver Street, this city.”

Watch the Cannonball blog in weeks to come for more old accounts of York County and York Countians in the American Civil War!

All photos were taken by Scott Mingus or are from his personal collection of York County Civil War images.