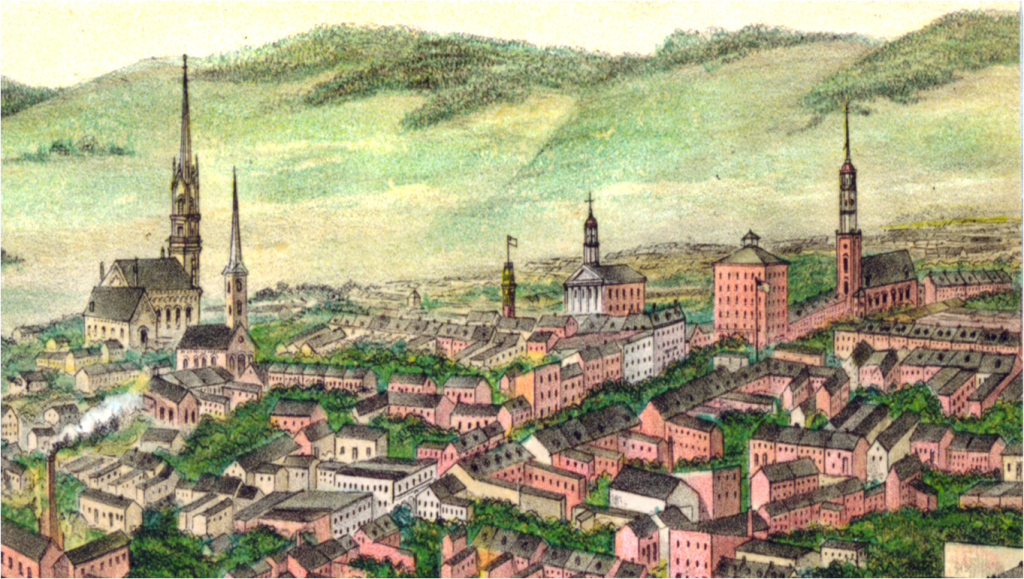 This detail from a colorful lithograph published by A Hoen & Co. of Baltimore in 1879 depicts many of the same buildings in downtown York which would have been familiar to the residents during the Civil War, as well as to the Confederate soldiers which occupied the town in 1863 during the Gettysburg Campaign. Prominent at the Hartman building in the right-center, York’s tallest retail establishment.  That’s Christ Lutheran behind it on S. George Street. In the center is the old York County Courthouse, with its distinctive white columns, on E. Market Street. This building was the headquarters of Confederate Maj. Gen. Jubal A. Early, who ransomed the town for $100,000.

The A. Hoen lithograph provides a fascinating look at downtown York, a bustling railroad town and regional center of commerce, agriculture, and industry. A high-resolution digital copy is available for downloading from the Library of Congress. The following photos are details from that source. 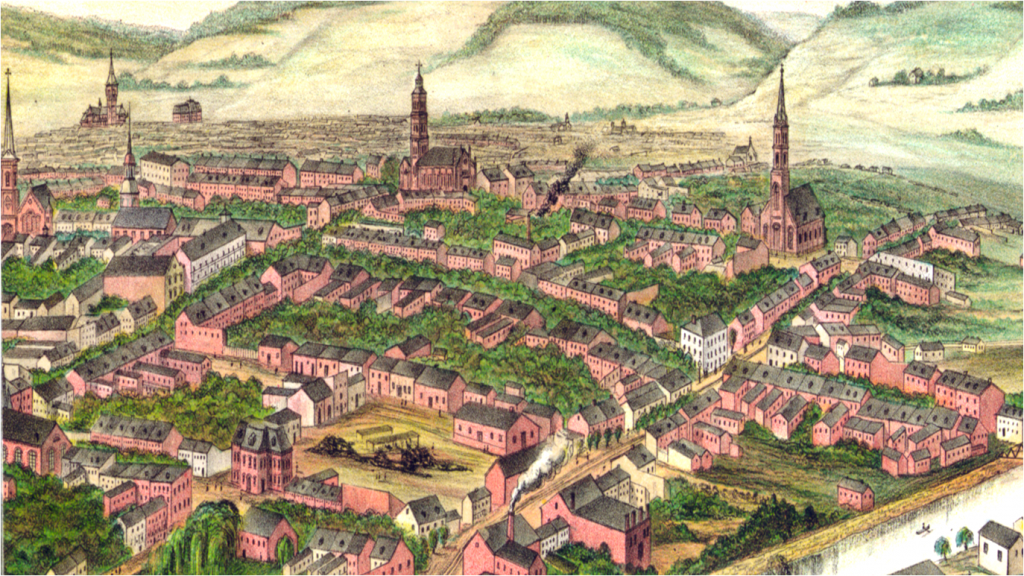 This view shows the western side of York from the square to the Codorus Creek. Prominent churches line both Market Street and Philadelphia Street. 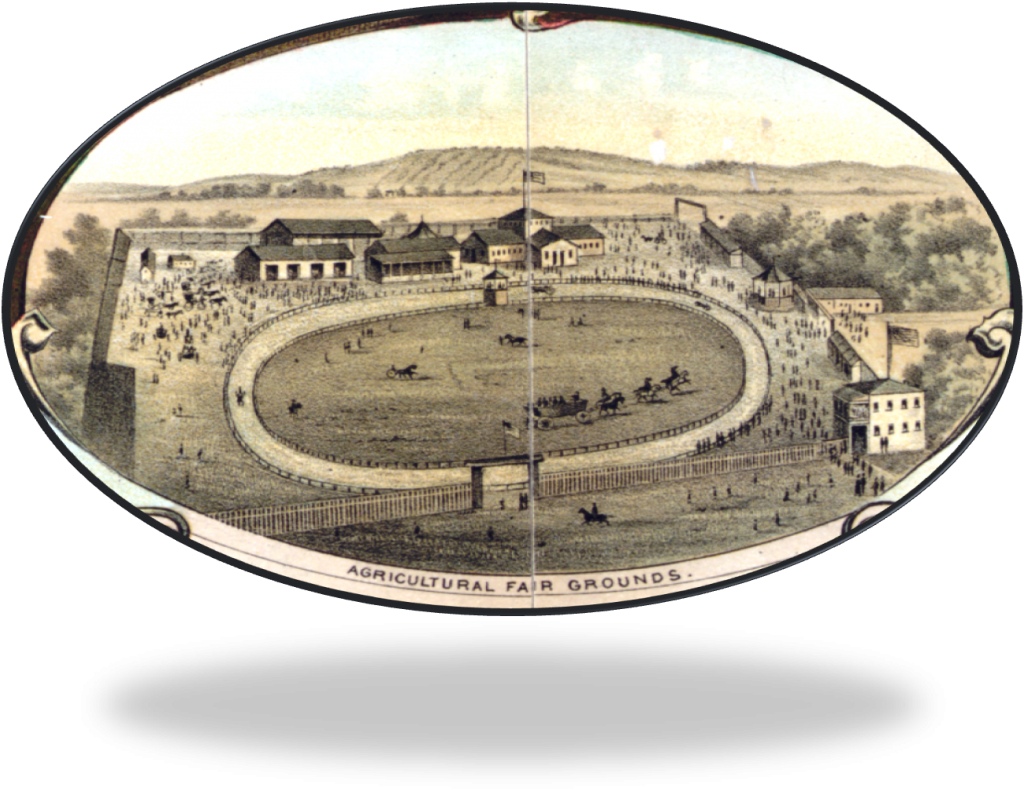 The old York Agricultural Fair Grounds was Camp Scott, a Union training center during the early part of the Civil War. Many of the buildings shown in the 1879 print served as barracks during the war. In 1863, a regiment of North Carolina infantry seized Camp Scott and occupied it from Sunday afternoon, June 28, until late evening on the following day, when the regiment and the rest of Col. I. E. Avery’s brigade departed York to camp near a Georgia Brigade out on the Carlisle Pike (today’s Route 74). Captain James Carrington’s battery of Virginia artillery also camped at the fairgrounds; many townspeople came by to see the big guns. 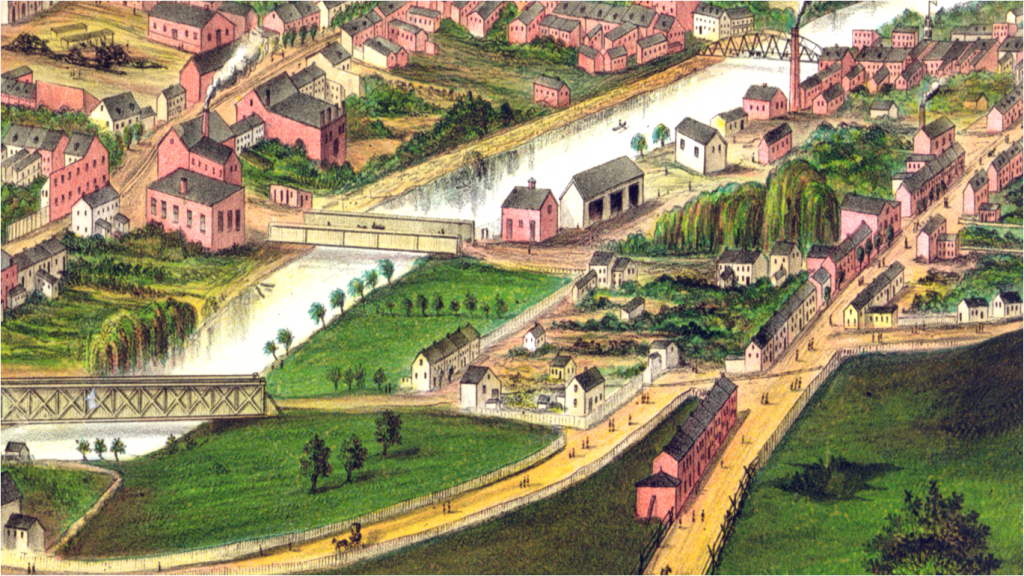 Codorus Creek is shown on the north side of York. The North Carolinians arrived in York by marching from Emigsville down George Street (lower right)  into downtown York. At least one regiment camped on the fairgrounds, while another used the U.S. Army General Hospital on Penn Common and a detachment slept in the market houses in the center square. North of the scene shown here were the campsites of Extra Billy Smith’s Virginia brigade, while the brigade of Louisiana Tigers camped on farms near today’s Harley Davidson factory off what is now U.S. Route 30. 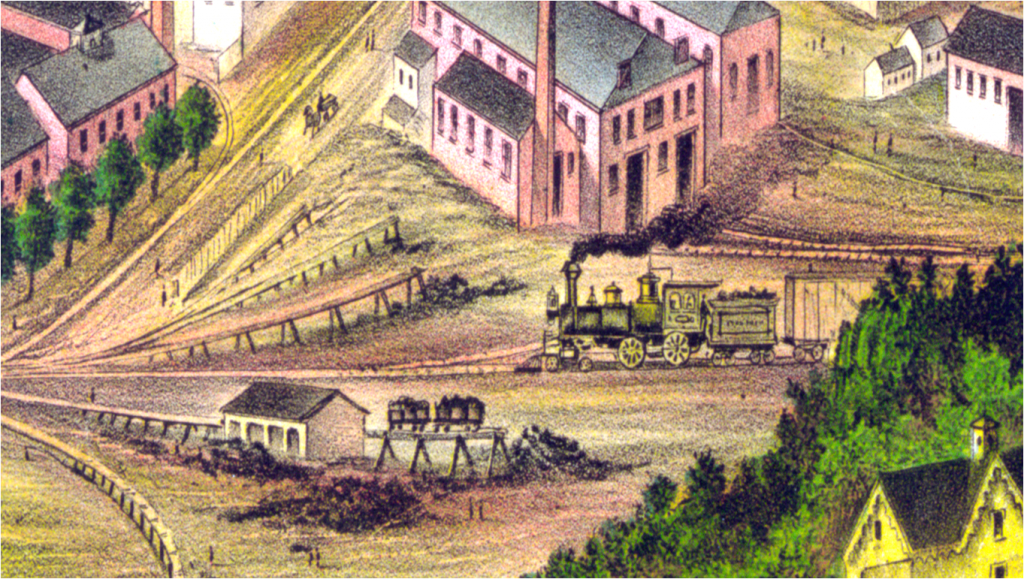 The Northern Central Railway and its successors were important to York’s economy and transportation needs in the 19th century. Here a locomotive steams out of York toward York Haven and Harrisburg. Jubal Early burned rolling stock at York, as well as some railroad buildings. He threatened to burn the new brick depot as well as nearby railcar manufacturing facilities, but desisted because of the threat of the fire spreading to the town. 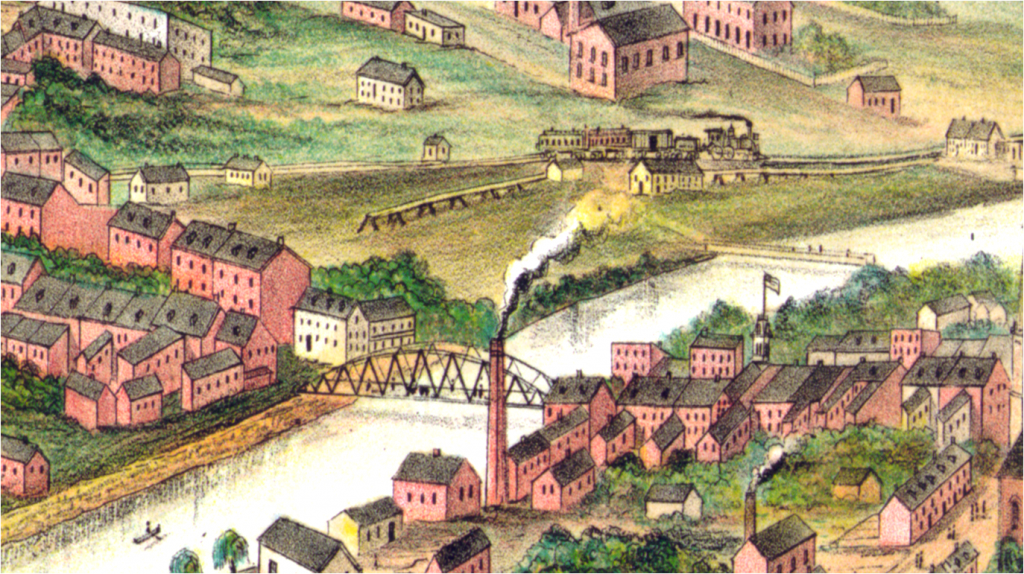 Another train heads south from York toward Hanover Junction and Baltimore. Confederates of the 17th Virginia Cavalry burned all of the railroad bridges between York and Hanover Junction, while other detachments burned the bridges north of town all the way up to York Haven. The U.S. Military Railroad erected temporary structures to allow hospital trains to come and go through York County following the Battle of Gettysburg. The Northern Central later replaced all of the bridges. 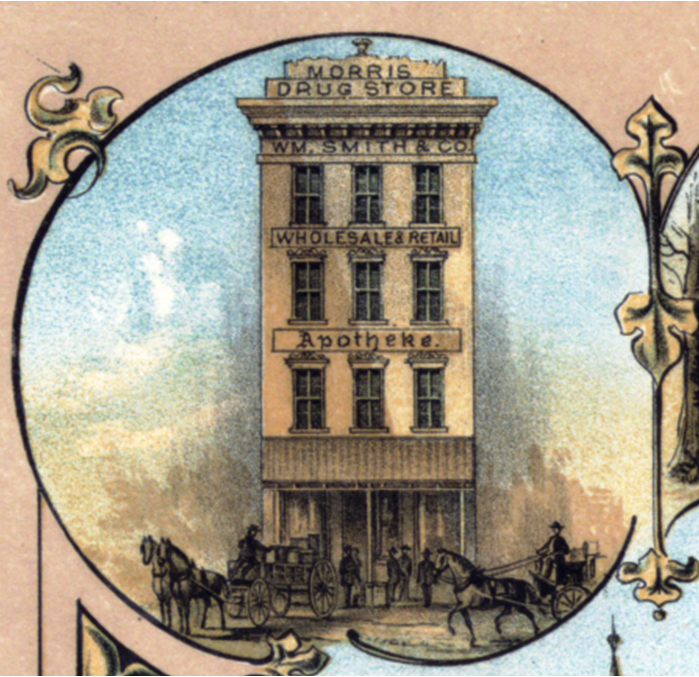 Charles Morris was a prominent druggist and civic leader during the mid-19th century. His wife led efforts to supply the patients at the Army General Hospital with bandages, food, reading material, and other supplies.

All images derived from the A. Hoen & Co. lithograph of York, Pennsylvania, printed in Baltimore about 1879. Courtesy of the Library of Congress Prints and Photographs Division. To view the original digital image, please click here and download the high-resolution TIFF file.