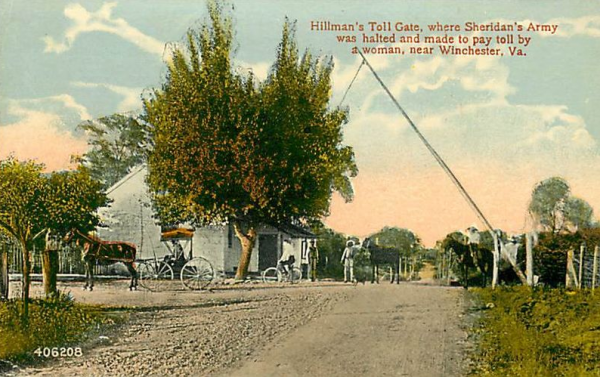 This old postcard shows the Hillman Tollgate south of Winchester, Virginia, during the 19th century. One hundred fifty years ago, this would have been a familiar site to the soldiers of the 87th Pennsylvania Volunteer Infantry, which frequently patroled the roads in this region.

The 87th, recruited primarily in York and Adams counties in the fall of 1861, had been deployed to Winchester in late December 1862, where they formed part of the division of Maj. Gen. Robert H. Milroy. Milroy, an Indiana attorney before the war, soon developed a reputation as a “tyrant” and “bombastic cow stealer” among the residents of the Winchester region. Confederate soldiers from the area were particularly anxious to end this “reign of terror.”

As Robert E. Lee launched his invasion of Maryland and Pennsylvania in early June 1863, he knew he had to deal with Milroy’s 8,000-man force which blocked the easiest roads to move an army northward through the Shenandoah Valley. Milroy split his force between Winchester, Bunker Hill, Martinsburg, and Berryville, but he expected no more trouble than a mere cavalry raid.

Lee had sent a full third of his army into the Shenandoah Valley with aims of capturing the key roads and river crossings before skirting Harper’s Ferry and invading the North.

On June 12, 1863, a large portion of the 87th Pennsylvania saw its first combat action. Here is that story…

Reports trickled in on June 11 that Rebel cavalry had been spotted on the Valley Pike south of town. In the morning of the 12th, Milroy dispatched Col. John W. Schall with 400 men of the 87th Pennsylvania; six companies of the 13th Pennsylvania Cavalry under Irish-born Maj. Michael Kerwin; and a section of Battery L, 5th U.S. Artillery on a strong reconnaissance toward Strasburg. In all, Schall had more than 700 officers and men under his command. After an uneventful nine-mile march, cavalry scouts in the early afternoon spotted Rebel riders ahead near Middletown. The enemy proved to be Capt. William I. Rasin’s Company E of the 1st Maryland Cavalry Battalion, with a few troopers from the 14th Virginia Cavalry and Maj. Harry W. Gilmor and eight of his rangers—in all about sixty men. They were the vanguard of Jenkins’ Brigade, en route from Cedar Creek to report to Ewell.[1]

The 25-year-old Kerwin proposed to ambush the oncoming Rebels by pretending that his advance force was retreating in confusion. Accordingly, Schall halted his command and deployed on either side of the turnpike, with Lt. Col. James A. Stahle and the infantrymen concealed in a dense grove to the right and the two guns behind a low ridge. “The disposition of our force had hardly been made,” reminisced the 87th’s Lt. William H. Lanius, “when the advance guard of cavalry made its appearance on the hill, coming in on the run, closely pursued by the enemy, who were howling like demons… An exciting and dramatic episode of this fight was the appearance of some women at a window in the gable end of a house to the left of Col. Schall’s five companies of infantry on the right of the pike. As the Confederate cavalry came dashing over the hill in pursuit of our cavalry, these ladies beckoned them with motions of their hands and the waving of handkerchiefs not to come any farther. But the soldiers did not understand their signs.”[2]

One of the frantic women, young Kate Sperry of Winchester, recalled, “We were all at the end window near the top of the house—we screamed and begged and waved them back, but it was too late.” The charismatic Harry Gilmor, wearing a “gold-splattered” new uniform, led the unsuspecting Rebels forward, yelling wildly and waving his sword. A sudden destructive broadside of musketry and artillery shells from Schall’s hidden forces stunned the onrushing Confederates. The 87th Pennsylvania’s John Keses recalled, “We took our positions flat down in a clover field a little out of sight while the cavalry pushed on to draw on the rebs. We had a couple of shots at them before they recovered from their surprise and withdrew in haste.” According to the 87th’s Sgt. George Blotcher, the women in the house began “screaming with all their might, and hollering my god, they are killing all our men.” He added, “The battery was discharged loaded with grape and canisters which was the signal for us to fire which we did with good effect considering the empty saddles and horses running at large. It was a little like butchering.”[3]

The 87th had performed well in its baptism of blood, known in those days colloquially as “seeing the elephant.” The next two days, however, would prove to be among the most chaotic and disheartening of the regiment’s entire Civil War service.

[1] Goldsborough, The Maryland Line in the Confederate Army, 174-76.  Jenkins departed Cedar Creek with his entire cavalry, except Capt. Frank A. Bond’s Company A of the 1st Maryland Battalion, which remained with the Maryland infantry and artillery. In some accounts, Rasin’s name is spelled incorrectly as “Raisin” and Kerwin as “Kirwan.” Rasin survived the war and became a successful businessman in Baltimore, dying in 1916.

Adapted from a manuscript in progress for publication in 2014. Copyright 2013 by Scott Mingus. All rights reserved.